If you want to know how much JAX appreciates the DNA molecule, just look at our logo to see that twirling helix spell out our name. Whether we choose to study questions in genetics or genomics, we all eventually return to that fundamental building block, DNA. Or should I say, #DNA?

For fourteen years, April 25th has been reserved for National DNA Day, created to celebrate the discovery of the structure of DNA in 1953, and the completion of the Human Genome Project 50 years later in 2003.

To take this year’s celebration to a whole new dimension, JAX joined the social media fray in a lively (if not frantic) “Twitter chat” sponsored by the NIH (@DNAday). Eight JAX scientists and science writers took the challenge and exposed themselves to the public (clockwise):

Here’s how a “Twitter Chat” works. The moderator has a list of questions they supply in advance and these questions are introduced in Tweets over the course of the hour:

The rules are pretty simple:

Some of us were really eager and got out of the gate early – perhaps too early? ;-) 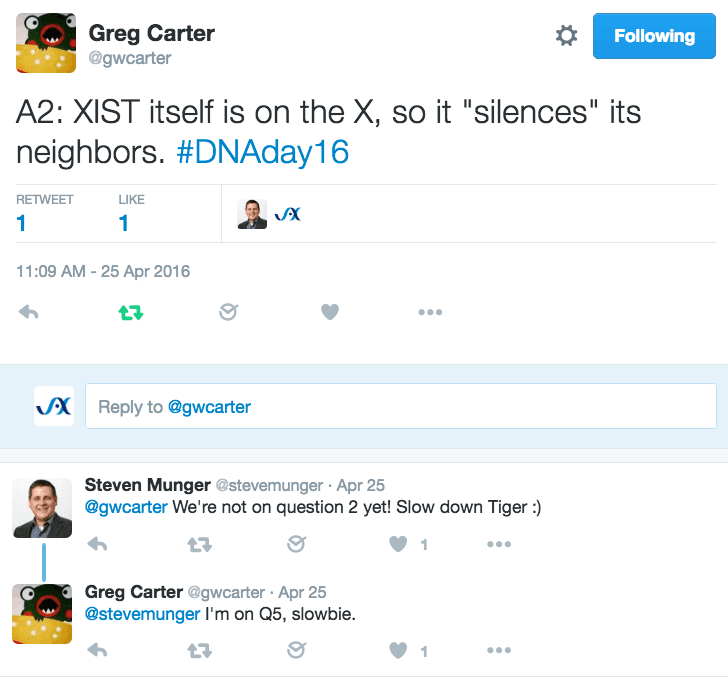 The best Tweets were selected to be re-Tweeted by the moderator, @DNAday. JAX got a great shout-out for question #3, a question that must have been written with us in mind! 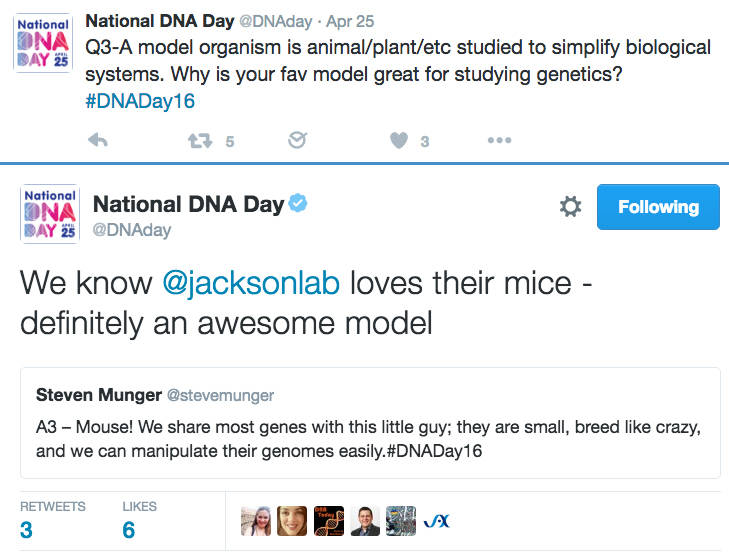 A popular question that had everyone @JAX participating asked us to reveal our secrets to success… listen up, young scientists! 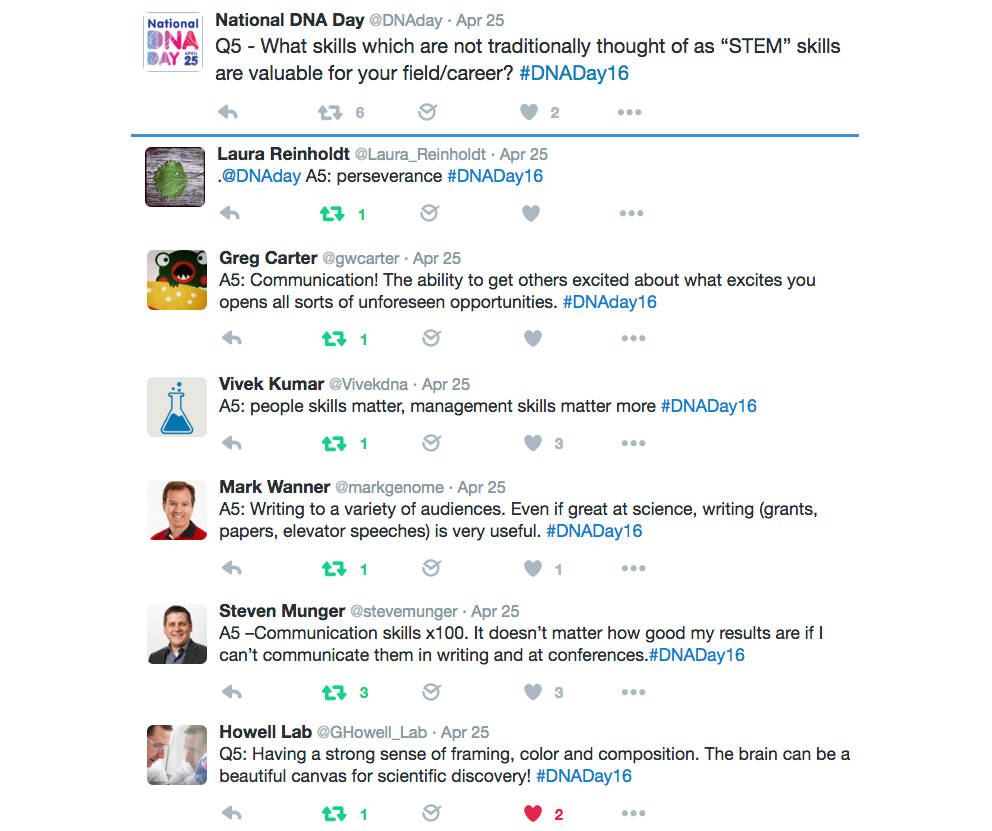 Q8 asked whether participants had their DNA analyzed, and it was impressive to learn how many of us had part or all of our genome sequenced. In fact, it was through this Twitter chat that Steve Munger and Mark Wanner discovered they both carried the ApoE4 allele of APOE, or Apolipoprotein E. This genetic variant can increase the risk of late-onset Alzheimer’s Disease, and is certainly a good allele to be aware of — as Steve notes powerfully. 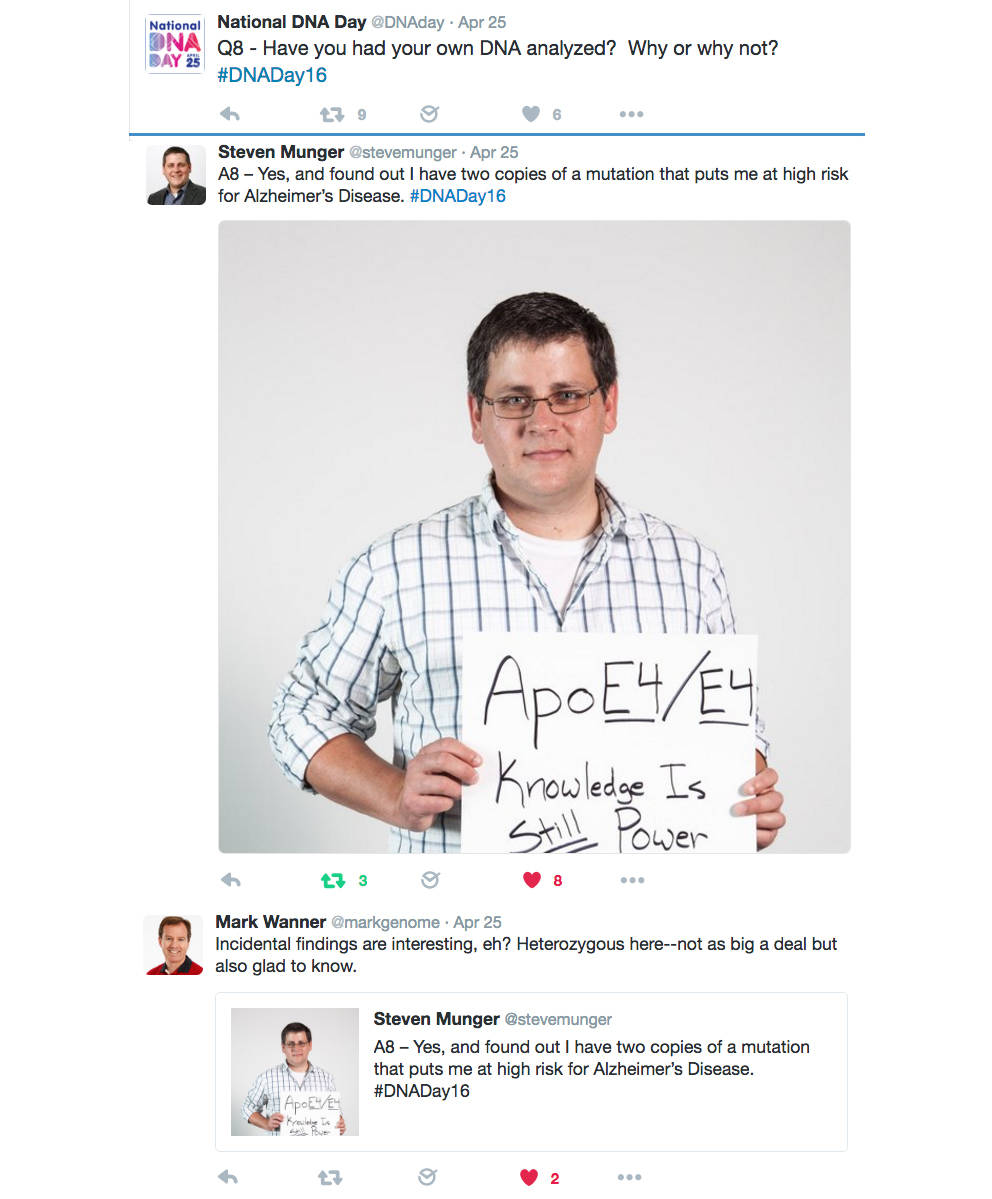 (Mark is currently writing a series on personal genome sequencing using his own results as inspiration; watch the JAX blog for the first installment).

The last question ended #DNAday16 with a bang by asking for everyone’s favorite ‘citizen science’ projects. There was a tsunami of participation throughout Twitter for this one, with a good mix of crowd-funded science, ways to contribute your own DNA, and appeals to increase research funding:

Frantic? Maybe. Fruitful? Definitely! We hope you’ll join us next year – go reserve your bluebird suit and get ready for #DNAday17.

After 20 years of academic research in genetics and developmental biology, Dayana Krawchuk decided it was time to take the science show on the road. Managing JAX social media channels on Facebook (The Jackson Laboratory), Twitter (@jacksonlab), LinkedIn (The Jackson Laboratory) and Instagram (@jaxlab), she posts, Tweets and ‘Grams our research to more than 12,000 followers.