A Vision for the Future of Sight

JAX researchers are shedding light on the mechanisms of eye diseases such as glaucoma and macular degeneration, as well as Alzheimer’s and other neurodegenerative diseases – treating the eye as a window to the brain. 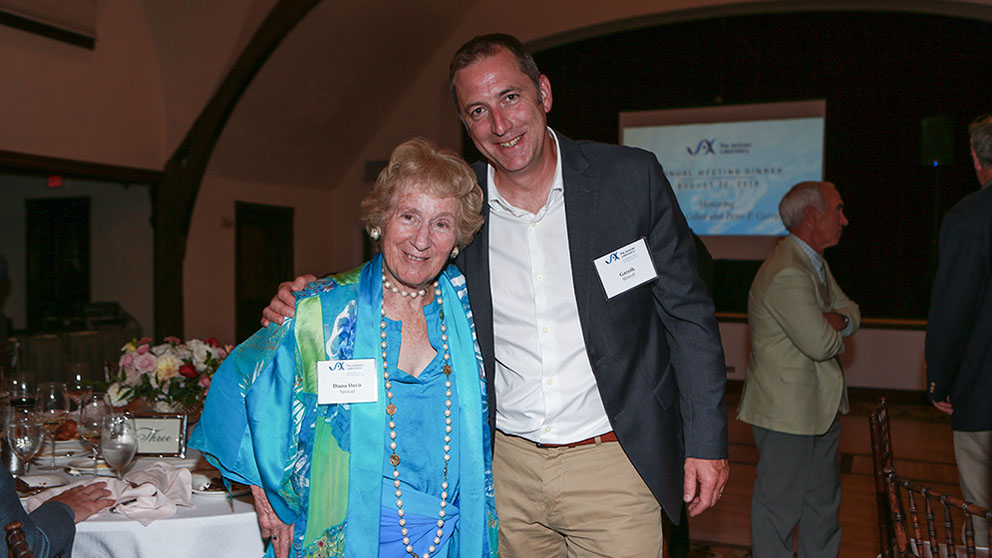 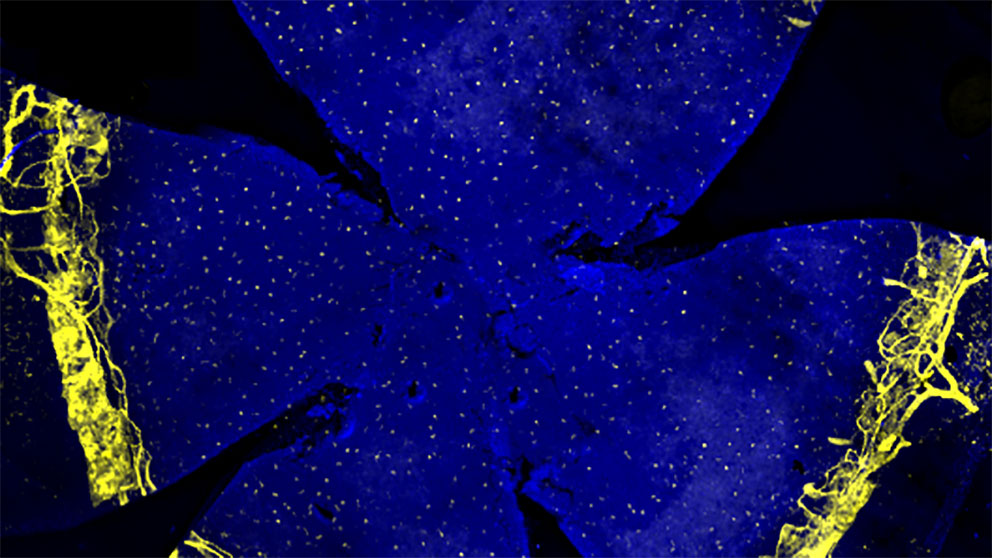 View of the front portion of the eye, including the Schlemm’s canal, blood vessels and lymphatics labeled in yellow and nuclei in blue. Photo courtesy of Krish Kizhatil. 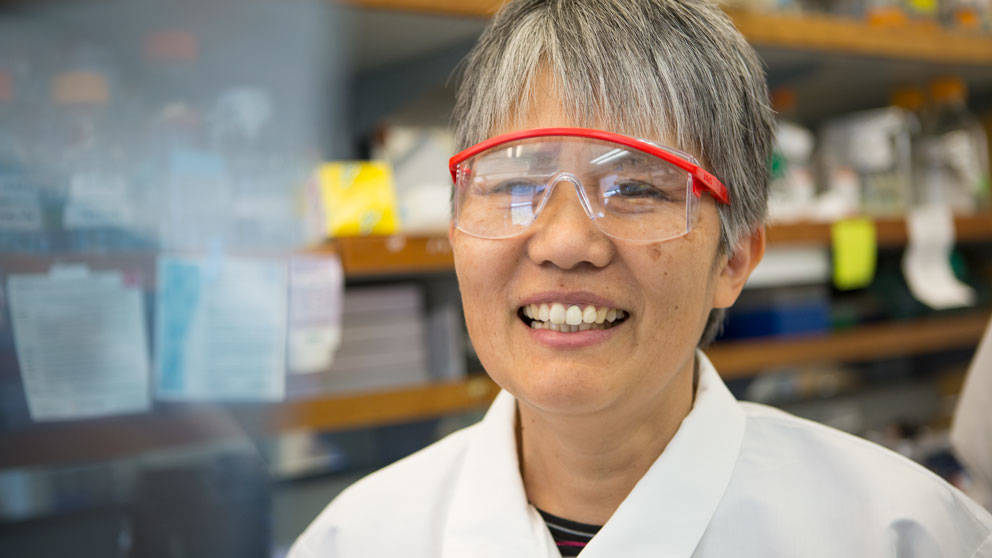 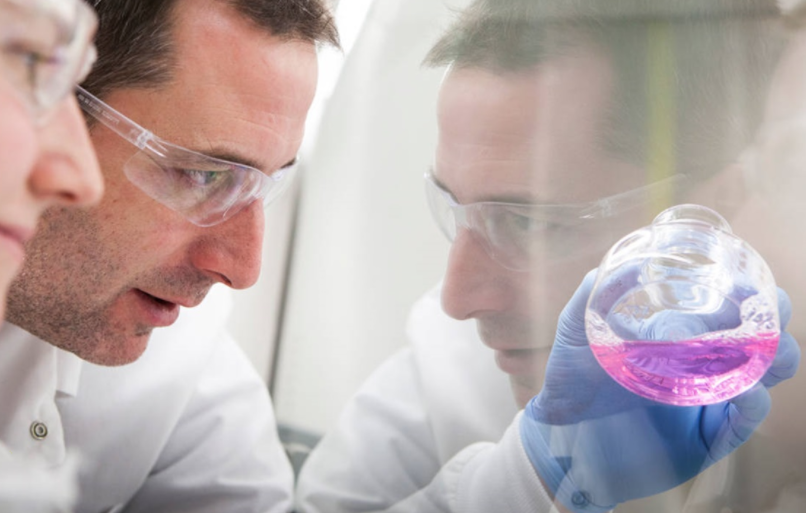 Meeting the challenge of ocular disease

A peerless resource for eye researchers worldwideThe National Eye Institute has made a four-year grant totaling $2,144,828 for continued funding for The Jackson Laboratory's Eye Mutant Resource.a-peerless-resource-for-eye-researchers-worldwide

The Foundation has donated an initial $2 million research grant for the study of complex ocular and neurodegenerative diseases focusing on glaucoma, AMD and dementias, and is pledging another $2 million challenge grant, which will be met by an additional $2 million in philanthropy, for a total $6 million investment into vision research at the Laboratory.Donate here to help us meet the challenge of ocular disease.

All eyes on Alzheimer’s disease research

If scientists can prove that retinal vessels in Alzheimer's decline in a similar fashion to brain cells, an eye exam could one day be used to identify those at risk of Alzheimer's disease before dementia-like symptoms develop.

The retina’s interaction with the brain makes it a good and relatively accessible platform for studying neural development.

Gareth Howell, Ph.D.Applies genetics and genomics approaches to study age-related neurodegeneration associated with Alzheimer’s disease, dementia and glaucoma.Gareth Howell is a JAX associate professor who studies Alzheimer’s disease and holds the Diana Davis Spencer Foundation Chair for Glaucoma Research. His research has shown that there are several connections between Alzheimer's disease and glaucoma. In glaucoma, the clear fluid that flows continuously through the anterior chamber at the front of the eye doesn’t drain properly, leading to a buildup of pressure that can damage the optic nerve, leading to vision loss and blindness.

Over the past decade, JAX Professor Patsy Nishina, Ph.D.Employs mouse models of human eye disease to study gene function and mechanisms underlying disease pathology.Patsy Nishina  and colleagues have developed hundreds of mouse models for translational vision research. Her lab announced seven new models, each of which carries genetic variants previously linked to retinal developmental or degenerative ocular disease, and that are now available to the biomedical research community.

“In people, most eye diseases take many years, even decades to appear,” Nishina says. “This means you don’t know you have the genetic predisposition for the disease until you actually have the symptoms. That’s why we need mouse models: We can develop mice with the same genetic profile as patients, so we can find therapies to target the pre-symptomatic stage to prevent, delay onset or decrease severity of the disease.”

In 2017, JAX scientists   Vitamin B3 prevents glaucoma, JAX researchers findNew research shows that simply adding vitamin B3 to the drinking water of mice predisposed to glaucoma can prevent the debilitating eye disease.discovered that adding vitamin B3  to the diet of mice genetically prone to contracting glaucoma protected them from developing the retinal loss associated with blindness.

Help us meet our goal of raising another $2 million for vision research at JAX, which will be matched by an additional $2 million from The Diana Davis Spencer Foundation! Please help us deliver the gift of sight for all.

Pete Williams, Ph.D., joined the laboratory of Simon John, Ph.D. in 2012. In the John lab, Williams was researching how to protect the...

A butterfly-shaped pigment accumulation in the macula of the eye, which can lead to severe vision loss in some patients, is due to...

The National Eye Institute has made a four-year grant totaling $2,144,828 for continued funding for The Jackson Laboratory's...

In an article published the week in the journal Human Molecular Genetics, Gayle Collin, working in the laboratory of Patsy...

The Naggert lab has identified a genetic modifier that prevents the fragmentation of the external limiting membrane in two...

Recent success at The Jackson Laboratory in delivering corrected genes directly to the mouse eye holds promise for safe and...

Simon John’s research and technologies have transformed the study of glaucoma.

Funding will support scientific research and training activities in the field of neurodegenerative diseases of the eye, including graduate...

An immune response triggered by high pressure in the eye occurs early in glaucoma and has a protective effect on retinal cells, a Jackson...

New research shows that simply adding vitamin B3 to the drinking water of mice predisposed to glaucoma can prevent the debilitating eye...