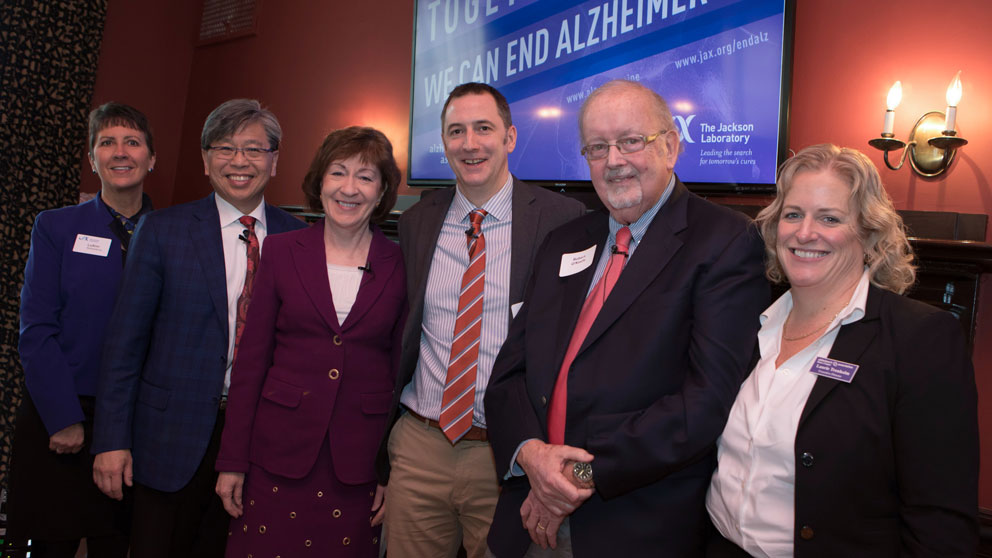 On Friday, February 23, 2018, The Jackson Laboratory (JAX) and the Alzheimer’s Association, Maine Chapter co-hosted a discussion about the  Stopping Alzheimer's disease before it erases memories, personalities and lives?Yes, it's possible. Using genomic technologies and specialized mouse models to develop preventative therapies, JAX scientists aim to stop Alzheimer’s before it starts.complexities of Alzheimer’s disease , to share the latest research and bring together a community of scientists and those whose lives are affected by Alzheimer’s.

Maine’s population is the oldest in the country by median age, which means the disease is of particular concern to Mainers. In fact, 27,000 Mainers have been diagnosed with Alzheimer’s, and that number is anticipated to surpass 53,000 by 2020.

"We spend $259 billion a year treating Alzheimer's disease… and we’re predicting an increase to $1 trillion by 2050," Collins said. "Maine is disproportionately elderly. We’re going to be hit hard by this disease."

To that end, in just seven years, Senator Collins and the Alzheimer’s Association’s advocacy arm, Alzheimer’s Impact Mission, have increased the federal budget for Alzheimer’s research from under $400 million to a proposed $1.8 billion in 2018.

Despite the difficulties associated with this devastating disease, panelists focused on hope, optimism, and gratitude. Robert O’Keefe, an inspirational Alzheimer’s advocate living with the disease, illustrated both the day-to-day difficulties of Alzheimer’s – including despair, problems for rural patients in finding care and support, and overcoming the fear that comes with the diagnosis – and also his positive perspective focusing on moving beyond the fear. O’Keefe noted the importance of continuing to do the things people with Alzheimer’s love, and encouraged his peers to “reach a point where you say, ‘I’m not going to be afraid anymore.’”

JAX scientists are harnessing powerful genomic technologies to uncover the complex causes of Alzheimer’s disease. The Laboratory is studying the genetic factors that protect brains from Alzheimer’s, along with how lifestyle impacts the onset of the disease, with the goal of  Breaking the bottleneck in Alzheimer's drug developmentFor the first time, researchers have the tools to build new mouse models that truly represent patients with Alzheimer’s disease. turning that knowledge into new therapeutics .

“It’s a bold approach, aiming to identify people at risk for memory loss and the cognitive decline of Alzheimer’s years before symptoms emerge,” said Liu.

Alzheimer’s has two “hallmark traits” of misfolded proteins that clump together to form plaques and tangles in the brain, disrupting nerve cell function. JAX researcher Gareth Howell, whose lab studies how Alzheimer’s disease is related to  Does a 'western diet' increase risk of Alzheimer's disease?JAX research provides insight into the role of the western diet in Alzheimer’s disease.diet and exercise , revealed that “it’s not all about those nerve cells and those plaques and tangles. It’s all about keeping those nerve cells alive. What we’re working on now is to understand the relationship between nerve cells that die ultimately through dementia, the inflammation, and the relationships to the plaques and the tangles.”

Liu’s final question to the panelists was what they would most want to happen to change the course of Alzheimer’s disease. O’Keefe spoke about continued hope for Alzheimer’s patients and their families, along with “care and support for the people out there who live with this.” In addition to a cure, the other panelists hope to find a biomarker to identify those at high risk far before they become symptomatic. Senator Collins remains optimistic about the 2025 goals she helped set in the 2010 National Alzheimer’s Project Act: to create “a means of prevention, effective treatments, or a cure.”

Every time I walk away from [JAX] I have so much hope that we could figure it out in Maine.

Lastly, Liu spoke of the new JAX collaboration with the Alzheimer’s Association and how the two organizations are working together across multiple fronts in the fight against Alzheimer’s, including education, advocacy and volunteerism. For example, on April 14 and 28, JAX employees will participate in volunteer service days to provide spring cleaning support in Maine, Connecticut and California for family members who are providing care for their loved ones struggling with the disease.

The event concluded with remarks from Trenholm about her optimism after meetings with JAX researchers, stating that she had “never seen such a group of energetic, committed, bright, intelligent, motivated people. Every time I walk away from the Lab I have so much hope that we could figure it out in Maine.”

With a bright smile, Liu summed up the event: “Yes, we can!”

The Jackson Laboratory and the Alzheimer’s Association are working together in the areas like education, advocacy and volunteerism to help our communities: