Tipping the scales on obesity and diabetes 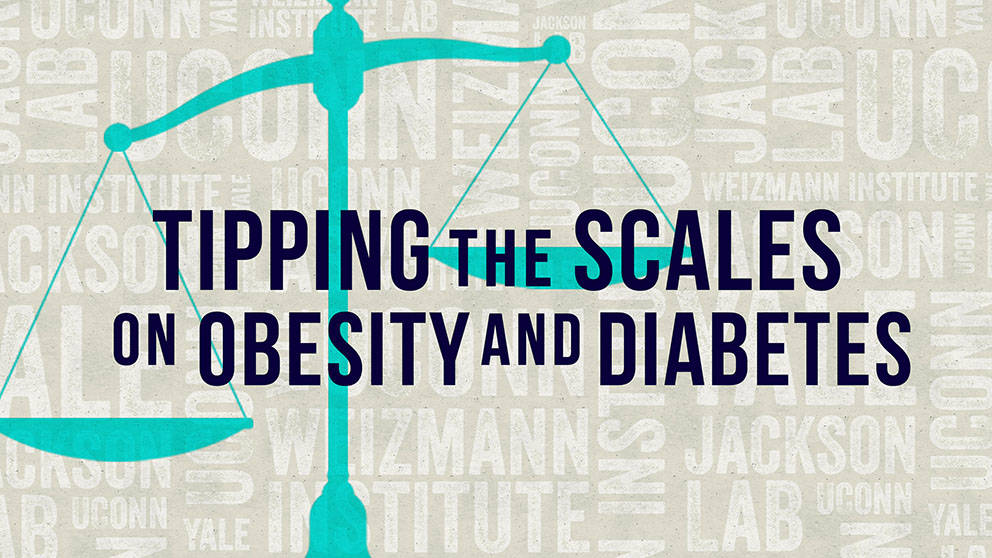 Three Connecticut research institutions are partnering with a prestigious counterpart in Israel to fill a research void that exists in the area of metabolic diseases, such as obesity and diabetes, which affect billions of people worldwide.

The goal of the Metabolic Research Alliance is to unite the expertise at University of Connecticut, Yale University, the Jackson Laboratory (JAX), and the Weizmann Institute of Science on research projects that swiftly move investigations into clinical application and commercialization.

The World Health Organization estimates that at least a half billion people worldwide suffer from obesity; more than 350 million individuals are diagnosed with diabetes.

“These two diseases are growing exponentially, and with catastrophic individual and societal effects and costs,” said Dr. Milton Wallack, founder of the Connecticut Stem Cell Coalition and organizer of the alliance. “Unfortunately, relatively few new therapeutic options are being developed, despite the crisis.”

The Metabolic Research Alliance will entail a novel approach to coordinating existing and new expertise in the areas of immunology, cell biology, microbiota, and the rapidly evolving field of genomics. While investigations will initially focus on obesity and diabetes, the research projects will eventually pursue solutions to additional metabolic diseases.

The formation of the alliance comes at an ideal time. The institutions have already begun to collaborate on research, including a study by Yale and UConn that found gut bacteria differ between obese and lean youth; another out of the Weizmann Institute about a Personalized Nutrition Project; and a JAX and UConn study indicating that eating walnuts could protect against colon cancer. And, the state of Connecticut has been called a “hub for new bioscience companies,” based on the infrastructure available through the alliance institutions to foster new research prospects.

“That hub is growing rapidly,” said Jeffrey Seemann, UConn’s vice president for research. “Our world-class Technology Incubation Program (TIP) provides lab space and business services for emerging firms, and is already supporting companies with links to Yale, UConn, and JAX that are well aligned with this initiative.”

Researchers within the alliance began making connections on projects at a scientific workshop held at UConn Health in Farmington in April and co-sponsored by the Cohen Family UConn-Israel Start-up Fund managed by UConn Global Affairs, where two dozen of the institutions’ leaders presented.

Among the alliance projects:

The collaborative teams of Gross and Vella will investigate the role of a key outer mitochondrial membrane protein called mitochondrial carrier, regarded as a gatekeeper for oxidative phosphorylation. Its absence is associated with increased metabolism or energy consumption. This data will be clinically useful in the development of new ways to control obesity, with the goal of identifying novel protein interactions for possible pharmaceutical targeting.

Chen, Kuperman, and Shulman will exchange expertise and knowledge available at the Yale and Weizmann Institute Metabolic Phenotyping Centers, and will resume past collaborations on the involvement of stress-signaling molecules, in both brain and muscle, in regulating metabolic functions and stress-induced metabolic diseases such as obesity, type-2 diabetes, and eating disorders.

Weinstock, Elinav, and Herold will collaborate on a study of immunological and microbial contributions to obesity and the metabolic syndrome.