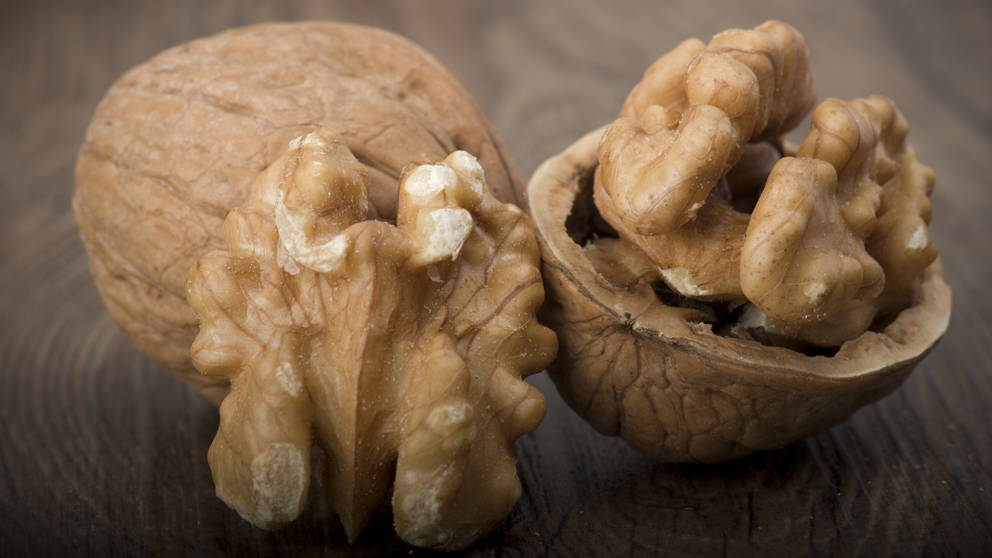 A team of researchers from UConn Health and The Jackson Laboratory for Genomic Medicine found that mice that ate 7 to 10.5 percent of their total calories as walnuts developed fewer colon cancers. The effect was most pronounced in male mice, which had 2.3 times fewer tumors when fed walnuts as part of a diet similar to the typical American’s. That’s equivalent to a human eating about an ounce of walnuts a day.

Our results show for the first time that walnut consumption may reduce colon tumor development.

“Our results show for the first time that walnut consumption may reduce colon tumor development,” said Principal Investigator Daniel W. Rosenberg, Ph.D., of UConn Health. “There is accumulating evidence that eating walnuts may offer a variety of benefits related to health issues like cancer. This study shows that walnuts may also act as a probiotic to make the colon healthy, which in turn offers protection against colon tumors.”

Walnuts are packed with compounds known to be important nutritionally. They have the most polyunsaturated fatty acids of all the commonly eaten tree nuts, as well as the highest ratio of omega-3 to omega-6 fatty acids, and high levels of a form of Vitamin E with anti-cancer properties.

But walnuts are not merely the sum of their chemical parts, and it may be as a whole food that they pack the most significant anti-cancer punch against colon cancer, the third most common cancer in the world. Other studies have shown walnuts have promise warding off diseases connected to diet and lifestyle, including heart disease, diabetes and neurological disorders.

Rosenberg, a cancer researcher and professor of medicine at UConn Health, and colleagues tested the cancer prevention qualities of walnuts on mice fed two different diets. One group of mice ate a standard lab mouse chow, while the other group ate a chow that captured the nutritional profile of the typical American diet. Subsets of both groups were supplemented with walnuts. Interestingly, male mice fed the Western diet fortified with 10.5 percent walnuts showed the greatest decrease in colon tumors compared with mice fed no walnuts.

To figure out why walnuts were beneficial, the UConn Health team collaborated with Professor George Weinstock, Ph.D., and colleagues at The Jackson Laboratory. Weinstock’s lab took fecal samples from the mice and analyzed the communities of bacteria living in their digestive tracts. They found that walnut consumption tended to push the gut microbiome toward an ecology that was potentially protective against cancer. It’s not clear exactly how this works, but there are clues. For example, previous research has shown that some gut bacteria digest fiber into compounds with anti-inflammatory properties that may reduce tumor initiation. The microbiome analyses also reflected interesting differences between male and female. Males on walnut-free diets tended to have less-diverse gut flora than females. Adding walnuts to the diets of male mice brought their microbiomes closer to those of female mice on either of the diets. Whether this change contributes to the protection seen in male mice remains to be determined.

Because the studies were done only in mice, more testing needs to be done in humans before walnuts can be unequivocally recommended as a cancer-prevention agent. Rosenberg’s group is working with a nutritionist and surveying human colonoscopy patients about their diets as part of a longer term study in humans.

However, Rosenberg isn’t waiting for the final word. Even right now, he says, “I try to eat walnuts every day.”

He adds: “We’re excited about future studies where we will be able to look at food consumption patterns to see how these results apply to humans.”

This research was supported in part by the California Walnut Commission (CWC) and the American Institute for Cancer Research.