The overarching theme of the Palucka lab is to investigate the mechanisms of human immunity and to identify strategies for harnessing the power of the immune system to prevent and treat cancer.

A central focus is on immune-based therapeutics for cancer, a highly attractive option owing to three cardinal features of the immune system: the mobility of immune effector cells, which enable them to traffic to cancer sites and sense even residual disease; the specificity of immune effector cells, which thereby limits treatment toxicity and off-target effects; and the memory of immune cells for their targets, which endows them with the ability to recognize and prevent metastasis. 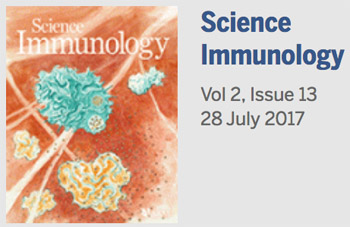 Dendritic cells (DCs) play a crucial role in priming T cell–driven antiviral responses. Silvin et al. have examined the paradox of how virus-infected DCs retain the ability to drive adaptive immune responses. In response to endocytic viruses, they found CD1c+ DCs to be susceptible to infection and death, whereas CD141+ DCs were not.

They report that viral resistance of CD141+ DCs was conferred by the expression of an endocytic guanosine triphosphatase, RAB15, and that transfer of antigen from infected CD1c+ DCs by CD141+DCs allowed these virus-resistant DCs to prime T cell responses.

By documenting a division of labor between DC subsets that separates antigen acquisition from antigen presentation, Silvin et al. offer a solution to this long-standing puzzle.

T cells in particular can reject tumors when armed with proper recognition tools and effector molecules, as demonstrated by the therapeutic success of adoptively transferred, genetically engineered T cells. T cells can also prevent tumors via immune surveillance. However, T-cell activation can contribute to cancer progression through i) selective pressure caused by T-cell-mediated release of IFN-gamma that induces genetic/epigenetic alterations in cancer cells; ii) endogenous blockade of T-cell effector function via other immune cell types (i.e., T-regulatory and myeloid cells), and iii) corruption of T-cell function by cancer-derived factors. Check-point inhibitors—a class of drugs thought to act by blocking inhibitory signals to effector T cells, thereby unleashing their effector function—have ushered in a new era for cancer therapy. The next critical step toward improving response rates to these promising drugs, which today remain below 50%, is to enhance T-cell effector function via adoptive T-cell transfer or induction of T-cell expansion in vivo, i.e., vaccination. We are pursuing strategies based on the concept that T cells are drugs that can be armed ex vivo or expanded in vivo via cancer vaccines. Thus, T-cells are a “double-edged sword” but, with careful manipulation, it is possible to tip the balance of function in favor of their cancer-destroying effects.

Another focus of the lab is on the development of next-generation mouse models for studying human immune-cancer dynamics. The development of immunodeficient mouse models that permit engraftment of human tumors, such as the NSG mouse pioneered at JAX, transformed our ability to study human cancers in the laboratory setting. However, the mouse immune system is vastly different from its human counterpart, making it difficult to study the role of the human immune system in cancer in existing models. Current “humanized” models of immunodeficient mice, which are engrafted with human hematopoietic stem and progenitor cells, were a big step forward. However, the development and function of several human immune cell types, such as monocytes, macrophages and natural killer (NK) cells, is still largely defective. Modeling the complete human monocyte and macrophage compartment is important, because monocytes and macrophages play critical roles in tissue homeostasis, responses to infectious agents, inflammation and tumorigenesis. It is thus critically important to develop a model of humanized mice in which these lineages are properly developed and functionally mature. Indeed, humanized micewith a more complete hunam immune repertoire represent a next-generation model for evaluating the complex interplay between the human immune system and cancer with improved fidelity and precision. We are collaborating in this area with several teams at JAX as well as with Dr. Richard Flavell and Dr. Anthony Rongvaux at Yale.

Finally, we are participating in a consortium-like effort based on human immunology research groups working together to advance our understanding of the regulation and function of human immunity across lifespan and in health and disease. We are taking advantage of recent advances in genomic and phenotypic profiling technologies and teaming up with clinicians across the United States to acquire a diverse range of human immune samples, conduct high-throughput genomic and phenotypic analyses, and upload the data onto public repositories to enable access to the broader research community. These studies will illuminate our understanding of the diversity of the human immune response, and ultimately help us to develop molecular signatures of immunity that can be used to improve treatment options for patients suffering from immune-related conditions.

The immune system in tonsil is highly organized. With T cells zone (yellow) including cytotoxic CD8 T cells (red), B cells zone (blue), myeloid cells (green) interacting with both T cells and B cells and high endothelial venules (purple) allowing immune cells to circulate in and out of the tissue.

Langerhans cells (red), specialized skin dendritic cells are the front line defense in the dermis/epidermis (green). Other types of myeloid cells (purple) are in the second line.

Whole melanoma section scan shows the abundance of the immune infiltrate (green) among which CD14 myeloid cells (red) are the most abundant cell type.

My research interests include Bioinformatics, Genomics, Immunology and Cancer Biology.

This two-day course will help emerging scientists equip themselves with the professional, interpersonal and communication skills that...

Currently researching the microenvironment of breast cancer, in order to develop new strategies of immunotherapy.