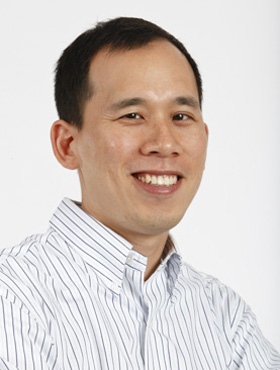 Advances in sequence and image data collection have radically transformed how biological systems can be understood. My lab uses computational and mathematical approaches to identify essential phenomena within large biological datasets. We are currently focused in three areas: 1) Evolutionary and ecological changes in cancer in response to drug treatment, 2) Prediction of outcomes from cancer image data, and 3) Fundamental mechanisms of gene regulation. The lab is a leader in patient-derived xenografts, a cancer model system in which patient tumors can be tested and assayed in response to alternate treatments. Our projects involve collaborations with cancer biologists, medical oncologists, geneticists, and computational biologists from JAX and many other institutes around the world.

Our lab focuses on understanding cancer using patient-derived xenografts, a model system in which human tumors are engrafted and studied in NSG mice. JAX has developed >400 such models from cancer types including breast, lung, bladder, and others, and these are a community wide resource. Our lab is involved studies using these models to understand the genetic drivers of cancer and drug resistance, with a focus on tumor heterogeneity and evolution. Within JAX we work closely with other groups studying xenografts, including the Bult (JAX-MG), Liu (JAX-GM), and Lee (JAX-GM) labs. These projects include studies to identify drivers of drug susceptibility in triple negative breast cancers (Menghi et al 2016) and to determine intratumoral evolution in response to chemotherapy.

As of September 2017, our lab leads the NCI PDXNet Data Commons and Coordination Center together with our colleagues at Seven Bridges Genomics. In this project, we are coordinating the analysis of novel xenograft studies across multiple centers around the United States in order to advance the development of clinical trials. Through this and other projects (Bais et al 2017), our lab has been one of the leaders in cloud computing approaches for cancer genomics analysis.

The lab also studies evolutionary and ecological processes in a variety of other cancer systems. Recent projects have included studies of selective pressures in intratumoral evolution across thousands of cancer samples (Noorbakhsh et al 2017) and investigations into immune and stromal introgression across cancer types (Chae et al 2018).

Our lab studies gene regulation at both the RNA and DNA levels. For RNA, our projects have included regulation of translation, protein-RNA binding, and splicing. For example, in collaboration with Prof. Susan Ackerman (UCSD) we have identified and characterized a mutation in a tRNA as a driver for neurodegeneration and shown that this phenotype is mediated by specific translational pausing at the codons complementary to the tRNA anticodon (Ishimura et al 2014; Ishimura et al 2016). This was the first tRNA mutation found to have a phenotypic consequence in a mammal. Another current interest is how proteins interact with RNAs to achieve specific binding. In this area, we have developed approaches to identify functional elements in RNA based on functional genomic, structural, algorithmic, and high-throughput sequencing approaches (Dotu et al 2018; Zarringhalam et al 2012). Our lab has been studying the functions and neutral evolutionary behavior of synonymous sites in coding sequences for more than a decade (Chuang and Li 2004; Chin et al 2005). We have shown for example that coding sequences are replete with binding sites for microRNAs, as well as other types of functional sequences such as exonic splicing enhancers. Such sites exhibit a strong selective pressure on the synonymous sites of coding regions (Kural et al 2009; Ding et al 2012; Ritter et al 2012).

Our lab also studies gene regulation at the DNA level by analyzing 3D interactions across the genome, in collaboration with Prof. Yijun Ruan (JAX-GM), including studies to elucidate the relationship between genome evolution and three-dimensional structure (Grzeda et al 2014).

Much of the lab's research has grown out of early interests in molecular evolution and statistical physics. For example, we have characterized the relative importance of cis- and trans- regulatory evolution on enhancers (Ritter et al 2010; Persampieri et al 2008; http://chuanglabapps.jax.org/chuanglab/cneBrowser/ ; http://chuanglabapps.jax.org/chuanglab/cneViewer/ ).

A related interest has been the evolution of mutational processes across species and cancers. This has included research into why mutation rates are uniform in some species, such as the sensu stricto yeasts, while rates vary by location in other species, such as mouse and human (Fox et al 2008; Chuang and Li 2004; Chuang and Li 2007; Chin, Chuang, and Li 2005). Biophysics interests have included the dynamics of translocation of a polymer through a nanopore (Chuang et al, Phys Rev E 2001) and the thermodynamic stability of protein folds (Chuang et al, Phys Rev Lett 2001).