In the fight over the CRISPR patent, JAX customers win

Thirty-four years ago, Richard Palmiter of the University of Washington and Ralph Brinster of the University of Pennsylvania created the world’s first transgenic mouse that, importantly, showed germline transmission of the introduced gene (Palmiter, et al., 1982). Soon after, gene targeting in embryonic stem cells though homologous recombination was demonstrated, and mice carrying targeted genes created by injecting the mutation-bearing ES cells into blastocysts were described, work for which Mario R. Capecchi, Sir Martin J. Evans, and Oliver Smithies received The Nobel Prize in Physiology or Medicine in 2007. For nearly three decades, these were the primary technologies available to scientists to create genetically modified mice. Alternative options were either to wait around for a phenotypically detectable mutation to arise spontaneously or to use mutagens to deliberately and broadly induce mutations, and then look for mice with interesting phenotypes. Then, a few years ago, CRISPR/Cas9 mutagenesis came along and blew our minds in ways that zinc fingers and transcription activator-like effector nucleases (TALENS) had not (see Pros and cons of ZNFs, TALENs, and CRISPR/Cas9).

“CRISPR” is shorthand for “clustered, regularly interspaced, short palindromic repeats”, and Cas9 is CRISPR-associated protein 9, which is the “business end” endonuclease in the CRISPR/Cas9 system. These elements function as a nucleic-acid based immune system in bacteria to protect them against bacteriophage infection. In bacteria, the CRISPR/Cas9 system cleaves infecting bacteriophage genomes from the host genome based on interactions between specific recognition sequences and the Cas9 endonuclease.

In 2012, Jennifer Doudna at the University of California, Berkeley and Emmanuelle Charpentier, then at the Max Planck Institute for Infection Biology in Berlin, but now at Umeå University in Sweden reported modifications to this system that enabled directed DNA editing. They initiated their patent application on May 25, 2012 with the expectation that it would be interpreted as an invention for editing any DNA.

In 2013, a research group led by Feng Zhang at the Broad Institute published their results using CRISPR/Cas9 to edit genes in mammalian cells. Their patent application was filed after the Berkeley team’s on December 12, 2012; however, they requested an expedited review that resulted in their receipt of the patent award in 2014.

Prior to March 16, 2013, patents were awarded on the basis of who created a given invention first. After that date, the system switched to awarding patents on the basis of who files first. Both groups filed their key patents before the change. The Berkeley team was granted a rare patent interference hearing, which is still on-going, during which the courts will decide who invented CRISPR first and what, specifically, the invention is. The Berkeley group’s study was carried out in prokaryotes; the Broad group argues that their work in eukaryotic cells distinguishes itself as a separate invention.

The dispute has attracted considerable attention for several reasons. Interference cases are rare and this may be the last large patent interference trial ever, now that the system has changed to “first-to-file” rules (Zhang, 2016).  Secondly, billions of royalty dollars are at stake, with millions being spent on legal fees and hundreds of millions being raised in venture capital for prospective commercial applications of the technology. The recent hearing at the U. S. Patent and Trademark office was standing room only, with an additional room set aside for overflow (Zhang, 2016). 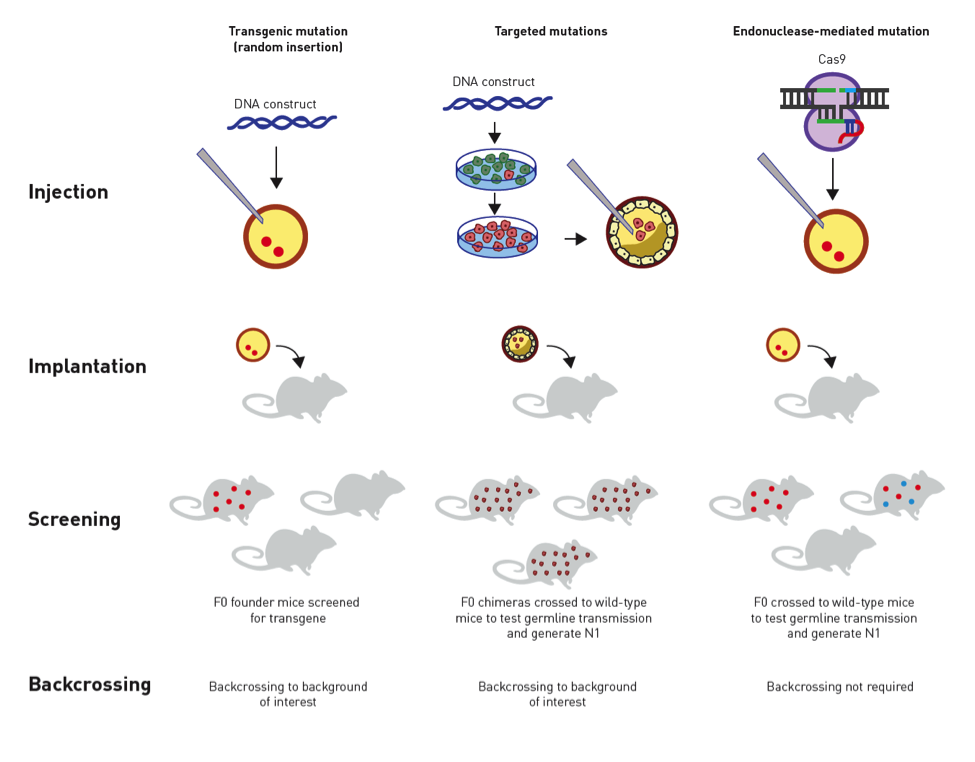 Figure. Traditional vs. CRISPR approaches for genetically modifying mice. Transgenics are produced by injecting a DNA construct into a fertilized egg that is then implanted into a pseudopregnant female. The genomic insertion site is unknown unless genetically mapped, and the transgene can disrupt endogenous genes. Targeted mutations are produced by introducing a DNA construct into embryonic stem (ES) cells. Positive or negative selection allows identifying the mutant ES cells that have undergone correct homologous recombination. The mutant ES cells are injected into a blastocyst that is then implanted in a pseudopregnant female. Chimeric offspring are bred to screen for germline transmission of the targeted mutation. CRISPR/Cas9 mutations can be introduced directly in a fertilized oocyte by using a guide RNA, the Cas9 endonuclease, and repair mechanisms that can be error-prone or homology directed. CRISPR can introduce mutations directly into almost any background of interest, eliminating the need to first create a germline-competent ES cell line, and circumventing the time and costs to backcross the mutation once created to a desired congenic background.

Whoever owns the CRISPR technology, the discovery is a great one—the sort that is expected to earn a Nobel Prize and change lives through enabling breakthrough research. Although a decision on the CRISPR patent issue is still pending, The Jackson Laboratory has now obtained CRISPR licenses from both competing organizations. With both licenses in place, JAX customers interested in mouse model generation via CRISPR that is fast, cost-effective, and extremely versatile with regard to genetic background should be protected from patent infringement litigation. A schematic comparing the traditional methods for genetically modifying mice with CRISPR is shown in the Figure above.

Until recently, genome modification has been a relatively slow slog, requiring many months of cloning and cell culturing or founder line characterization, depending on the approach. CRISPR promises to be a more cost- and time- efficient alternative for creating new mouse models (see:  CRISPR your way to faster, easier mouse knockout models). Entities using research tools involving CRISPR technology may be wise keep up with the court proceedings and to choose collaborations and service providers with care. The Jackson Laboratory has obtained the rights from both Caribou and The Broad Institute to provide model generation services using CRISPR and to protect customers who seek such new models for most internal research.