Pros and cons of ZNFs, TALENs, and CRISPR/Cas 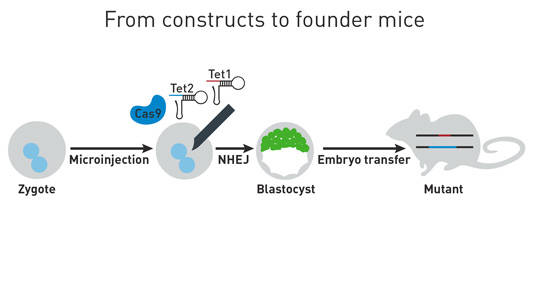 A bit of recent History

Genetic engineering via homologous recombination in mouse embryonic stem cells revolutionized mouse genetics in the 1990s. For the first time scientists were able to selectively knockout any gene of interest and evaluate directly its role in mouse development and physiology. This technology also permitted to generate mouse models that express specific disease-associated proteins by replacing the normal gene with one containing a specific mutation. This approach became the gold standard for determining gene function in mammals, and remains a powerful tool for modeling human disease in mice.

In 2007, the importance of gene targeting technology in advancing our understanding of mammalian biology was recognized by the Nobel Prize Selection Committee who awarded Drs. Mario R. Capecchi, Martin J. Evans, and Oliver Smithies, with the Nobel Prize in Physiology or Medicine for the development of this technology.

Although such genetically engineered mice are powerful tools, creating them is a slow and expensive process: a single targeted mutant mouse can take 2-3 years and $100,000 or more to create. In recent years, investigators have successfully developed alternative technologies to genetically engineer mice faster, more efficiently, and more economically.

Of ZNFs and TALENs

The latest approaches to genetic modification all use engineered non-specific nucleases that are fused to sequence-specific DNA binding domains. The DNA binding domains are designed to provide the target specificity and the nucleases introduce double stranded DNA breaks in the neighboring sequence. The double stranded breaks can then be healed either by blunt-end, non-homologous end-joining to introduce random mutations, or by homologous DNA repair by adding an engineered bit of DNA with homology on either side of the DNA break and encoding a specific mutation or insertion (e.g. cre recombinase, green fluorescent protein).

Zinc finger proteins (ZNFs) were the first of the “genome editing” nucleases to hit the scene. Zinc fingers are the most common DNA binding domain found in eukaryotes. They typically are comprised of ~ 30 amino acid modules that interact with nucleotide triplets. ZNFs have been designed that recognize all of the 64 possible trinucleotide combinations, and by stringing different zinc finger moieties, one can create ZNFs that specifically recognize any specific sequence of DNA triplets.

TALENs – Transcription activator-like effector nucleases - are similar to ZNFs in that they use DNA binding motifs to direct the same non-specific nuclease to cleave the genome at a specific site, but instead of recognizing DNA triplets, each domain recognizes a single nucleotide. The interactions between the TALEN-derived DNA binding domains and their target nucleotides are less complex than those between ZNFs and their target trinucleotides, and designing TALENs is generally more straightforward than ZNFs.

A key advantage of both techniques is that they are not limited to mutagenesis in mouse embryonic stem cells. ZNF and TALEN modifications have been engineered in zebrafish, fruit flies, nematodes, rats, livestock and even in monarch butterflies.

CRISPR/Cas: The Newest Kid on the Block

The latest exciting development in genome editing technology is the CRISPR/Cas system. CRISPR (clustered, regularly interspaced, short, palindromic repeats)/Cas (CRISPR-associated) systems are RNA-based bacterial defense mechanisms designed to recognize and eliminate foreign DNA from invading bacteriophage and plasmids. They consist of a Cas endonuclease that is directed to cleave a target sequence by a guide RNA (gRNA).

Both the Cas endonuclease and the gRNA are encoded by a “CRISPR/array” in the bacterial genome, and the system can be co-opted to cleave any target sequence of choice by modifying the sequence of the gRNA. 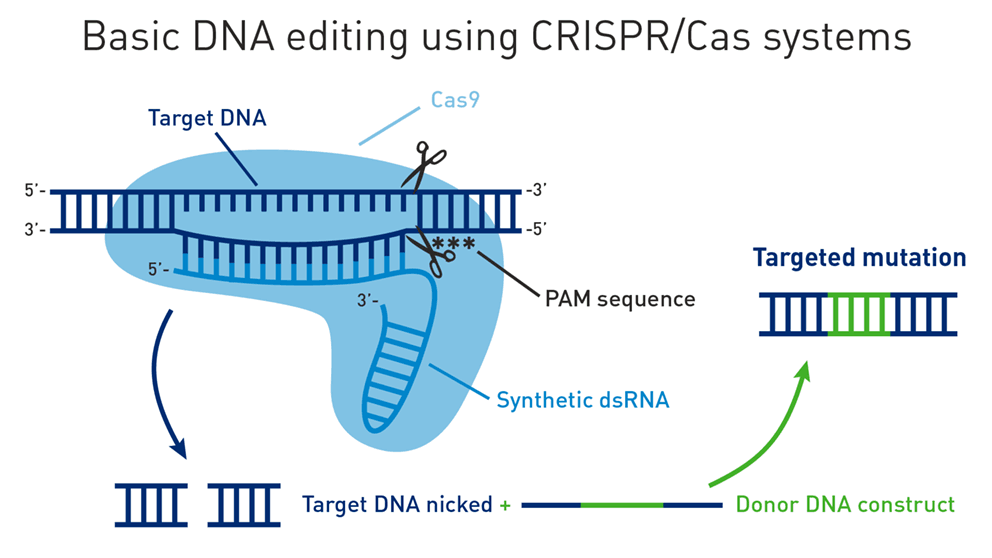 Similar to the ZNF and TALEN systems, the CRISPR/Cas system can be used to introduce either random mutations at the site of DNA cleavage by non-homologous end joining or specific mutations or insertions by co-injecting an engineered DNA construct with homology to the DNA on either side of the cleavage site.

Here is a short video of how CRISPR/Cas 9 system works.

The CRISPR/Cas system offers several advantages over the ZNF and TALEN mutagenesis strategies:

1. Target design simplicity. Because the target specificity relies on ribonucleotide complex formation and not protein/DNA recognition, gRNAs can be designed readily and cheaply to target nearly any sequence in the genome specifically.

2. Efficiency. The system is super-efficient. Modifications can be introduced by directly injecting RNAs encoding the Cas protein and gRNA into developing mouse embryos. This eliminates the long and laborious processes of transfecting and selecting mouse ES cells that are required to create targeted mutant mice using classical homologous recombination techniques.

3. Multiplexed mutations. Mutations can be introduced in multiple genes at the same time by injecting them with multiple gRNAs. JAX Assistant Professor Dr. Haoyi Wang and his former colleagues in Rudolf Jaenisch’s group at the Whitehead Institute recently reported using the CRISPR/Cas system to successfully introducing mutations in five different genes in mouse ES cells simultaneously.

They also demonstrated that they could co-inject oligonucleotides at the same time as the Cas and gRNAs to introduce specific mutations simultaneously via homologous DNA repair in two genes directly in mouse embryos. The ability to create mice with multiple mutations at the same time offers exciting possibilities to better understand genetic epistasis and to develop more complex disease models without the complicated and lengthy breeding strategies that often are required to create such mice from single gene knockouts.

All three technologies – ZNFs, TALENs and CRISPR/Cas – offer researchers with alternative methods to develop mutant mice and human disease models, faster than traditional gene targeting methods, but these are not without limitations and complications:

1. Off-site effects. Mutation introduced at non-specific loci with similar, but not identical, homology to the target sites are one of the most important complication of these technologies. These can be difficult to identify and require scanning the genome for mutations at sites with sequence similarity to the gRNA target sequence.

2. Mosaicism. Mice with a mutant allele in only some of their cells can be produced , because the nucleases may not necessarily cut the DNA at the one cell stage of embryonic development.

3. Multiple alleles. Healing of the nuclease cleavage site by non-homologous end joining can produce cohorts of mice with different mutations from the same targeting constructs, requiring genome sequencing to verify the nature and position of the specific mutation. The production of mice with mosaics of multiple mutations, also, is possible, and breeding may be required to segregate and isolate mice that carry single mutations. The production of mice with multiple variants also creates phenotyping bottlenecks.

Despite these difficulties, ZNFs, TALENs and especially the CRISPR/Cas systems are powerful new tools for manipulating the genomes of not only mice but also somatic and embryonic stem cells from other species, including humans.

It is likely that the refinements of these systems will continue and that they will be adapted in new ways to create ever more sophisticated animal models for and genetic therapies for treating human diseases.