The Golden Girls of laboratory mice—are these the oldest mice in the world? 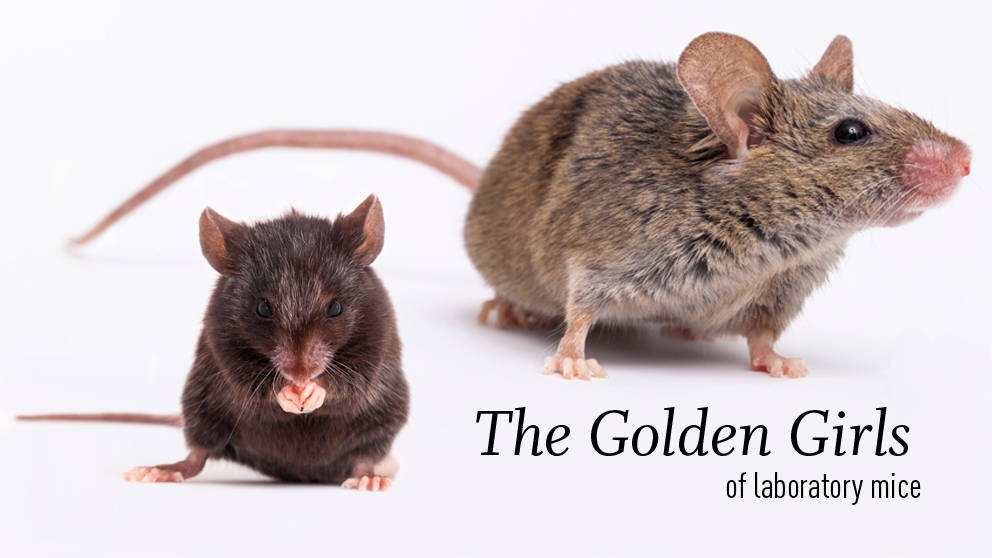 An unwritten rule in the mouse genetics community — one that sometimes unintentionally gets broken — is that we shouldn’t develop personal attachments to individual mice. Anyone who has ever worked with mice will attest to their unique beauty and individual personalities. That said, mice are short-lived mammals; individual mice rarely live past two years. This limits their attraction as a pet but makes them ideal as a research model. Furthermore, experimental protocols and phenotyping pipelines rarely go out past 26 weeks of age, meaning laboratory personnel get limited exposure to individual mice.

Aging research is an exception, though, and a few particularly long-lived female mice at the Jackson Laboratory (JAX) have recently gained worldwide attention and a loyal following of human fans. As part of a large study funded in part by The Lawrence Ellison Foundation, Gary Churchill, Ph.D., has spent the last five years aging a large cohort of genetically diverse outbred mice, the Diversity Outbred or “DO” stock – with startling results. A few hardy females from this group appear to have won the genetic lottery, and will soon reach the ripe old (for mice) age of 4.5 years – over twice the normal lifespan of a laboratory mouse, or roughly equivalent to a 180 (!) year old human. They are thought to be the oldest mice currently living in the world, and have sparked the interest and admiration of many at the lab.

Lisa Somes, a biomedical technologist who has worked at The Jackson Laboratory for 15 years, feels a special affection for “her girls.”

“Every single day for the past four years — 51 months to be exact — the first thing I do when I get to work is check on these mice. You can’t help but get attached to them. I’m rooting for them to get to five years,” exclaims Somes like a proud parent. Although genetics most likely underlies most of their extreme lifespans, these elder stateswomen receive special care from Somes and others in the mouse room.

“I put their food on the bottom of the cage to make it easier for them to eat. We provide them with nestlets, and change their cages every other week (as opposed to the normal weekly schedule) so as not to disturb them too much. And when we move them to a new cage, we take care to cup them in our hands rather than pick them up by the tail with forceps," Somes said, adding that the mice appear to relish the special attention they receive. “They’re very friendly and attentive. Every morning when I pull their box out to feed them, they’re waiting at the edge of the box to greet me.”

The laboratory mouse has proven to be a valuable model for aging research, and Churchill anticipates that these extreme DO mice will further help us unlock the genetic secrets to a long and healthy life. Regardless of whether or not these particular female mice make it to the magical age of five, they have demonstrated that a genetic “roll of the dice” can have an amazing effect on lifespan. In the process, they have sparked scientific debates and amassed a devoted fan club. Indeed, you can safely bet that if any of these "Golden Girls" are still alive on October 25, 2016, there will be quite the birthday celebration.

Steven Munger, Ph.D., is a former post-doctoral fellow and new assistant professor at the Jackson Laboratory for Mammalian Genetics in Bar Harbor, Maine. All opinions expressed in this blog are his own. Follow him on Twitter at @stevemunger.