If I’m not obese, I’m Misty

Who would have thought that a black mouse with a chance mutation would one day become one of the most used mice in diabetes and obesity research? Such is the case with BKS.Cg-Dock7m +/+ Leprdb/J (000642), a JAX® Mice strain harboring the spontaneous diabetes mutation (db) in the leptin receptor (Lepr) gene. The JAX® Mice Database lists more than 600 journal articles with this mouse as a main character.

Because homozygous Leprdb mutants are sterile, the strain must be maintained by mating heterozygotes to heterozygotes. Prior to 1996, the db mutation in this strain was not yet cloned and characterized, so no molecular assay was available to distinguish heterozygous from wild-type mice. This challenge was alleviated by taking advantage of the recessive coat color mutation, misty, which is closely linked to the Lepr locus on Chromosome four. 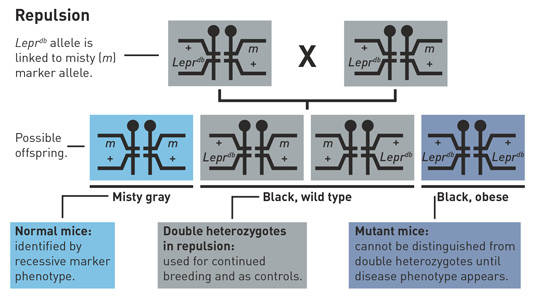 As researchers delved deeper into metabolic pathways, they often needed to genetically modify the BKS.Cg-Dock7m +/+ Leprdb/J strain. They also needed more than a visual technique for genotyping Dock7m mutants. So, necessity being the mother of invention, a molecular assay was developed after Dr. Jeff Friedman fully characterized the db/db mutation. The assay consists of PCR-amplification of the mutated region followed by a restriction digest. A complete protocol is freely available from the strain datasheet of strain 000642 on the JAX website.

A number of strains are useful for studying type 2 diabetes. Each has a unique phenotype. To make choosing the right strain easier, we’ve developed a website that contains many resources that may help you study type 2 diabetes and obesity. This site includes a helpful table that compares the major diabetes and obesity phenotypes of BKS.Cg-Dock7m +/+ Leprdb/J (000642) to six other commonly used mouse models of human type 2 diabetes. Bulleted summary descriptions of these and newly developed models are also available. These descriptions provide “at a glance” information about key strains. Below the descriptions, several strains have links to phenotypic data on weight gain and fed blood glucose over time. This information allows you to see how these strains differ as disease progresses.

To find out more about the BKS.Cg-Dock7m +/+ Leprdb/J mouse, check out the JAX® Mice Database (000642), or the Mouse Phenome Database. Maybe you’ll decide that this is the mouse you’ve been looking for, or maybe you’ll find another JAX® Mice strain that is more appropriate for your research.