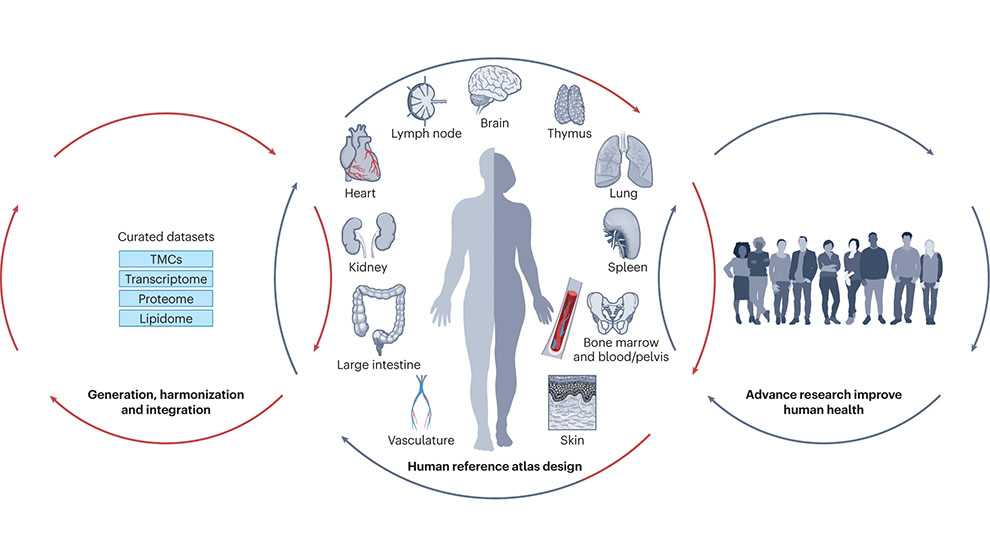 An ambitious multi-institutional research program is studying senescent cells—cells that have stopped dividing in response to stressors—and their effect on aging and human health at the single-cell level. JAX is playing a major role to bridge experimental mouse and human data and reveal the biology of senescent cells. The researchers will also investigate if therapeutics that target senescent cells may be able to delay age-related diseases and extend our health span.

We are comprised of trillions of cells, each of which plays an important role in our health and function. During development, the cells divide and specialize into our various tissues, some of which remain highly dynamic with high turnover, such as skin and blood, and others of which settle into stable, long-lasting functions, such as in the liver and nervous system. But throughout our lives, and particularly as we age, a small fraction of the cells throughout our bodies respond to stress by essentially stopping in place, a state that researchers call senescent. Cellular senescence is a kind of biological limbo, as senescent cells are stopped from dividing but also resist apoptosis, the normal process of cell death and removal.

Senescence is not necessarily a bad thing. There are times during normal development when certain cells need to become senescent, and it plays an important role in the wound healing process. Also, when a cell somehow becomes damaged, stopping it from replicating and acquiring genetic mutations can prevent cancer initiation and tumor growth. On the other hand, it appears that senescent cells can also be detrimental, contributing particularly to the aging process and age-related diseases. They also secrete a number of signaling molecules associated with immune activation and inflammation. Recent research with mice suggests that clearing senescent cells delays the onset of age-related dysfunction and disease as well as all-cause mortality.

Could therapies that remove senescent cells—called senotherapeutics—also improve the health of humans as we age? It’s an intriguing thought, and some promising clinical trials are already underway. Nonetheless, we still know relatively little about our senescent cells. Where and when do they arise in our bodies? How do they differ from cell to cell and tissue to tissue? Do they change over time, and if so, how? How can they be reliably differentiated from the non-senescent cells that vastly outnumber them? Answering these questions and more has the potential to significantly advance human health, and the National Institutes of Health (NIH) has launched an extensive research initiative for this very purpose.

The launch of SenNet

“NIH SenNet Consortium: Mapping the landscape of senescent cells throughout the human lifespan to understand physiological health,” a paper published in Nature Aging, presents the SenNet Consortium, a collaboration of institutions from throughout the United States. The SenNet program is a trans-NIH effort managed collaboratively by staff from the NIH Common Fund, the National Institute on Aging (NIA), and the National Cancer Institute (NCI). Begun in 2021 with centers established to gather and analyze human data, SenNet will collect and analyze 18 tissues from healthy humans across lifespan.

JAX is poised to make substantial contributions to SenNet. JAX-Sen will profile senescent cells in kidney, placenta, pancreas, and heart, all tissues that are relevant to chronic diseases of aging. The team will draw upon its genetically diverse mouse resources, including Diversity Outbred mouse populations, to model a range of molecular senescence traits, as well as inbred mice specifically engineered to help visualize senescent cell subsets. As three of the tissues (kidney, pancreas, and placenta) in the mouse JAX-Sen TMC are shared with the human KAPP-Sen TMC, these efforts align well with the JAX institutional initiative to continue to build the human-mouse interface. Data on the subcellular, biomolecular attributes and 3D maps from the SenNet study should aid in the interpretation of human senescent cell data.

Of course, the ultimate goal of SenNet goes beyond building an atlas of senescent cells in the body and knowing more about senescent cell biology. The potential benefits of senotherapeutics for healthy human aging are very exciting, as are other possible clinical advances, such as identifying individuals at higher risk for age-related disease.

“JAX, with our outstanding Scientific Services, mouse resources, and access to human tissues through our collaborators, is in an ideal position to make inroads into the understanding of senescent cells,” says Robson. “Better knowledge of this important biological phenomenon should have an impact on healthy aging and cancer prevention.”