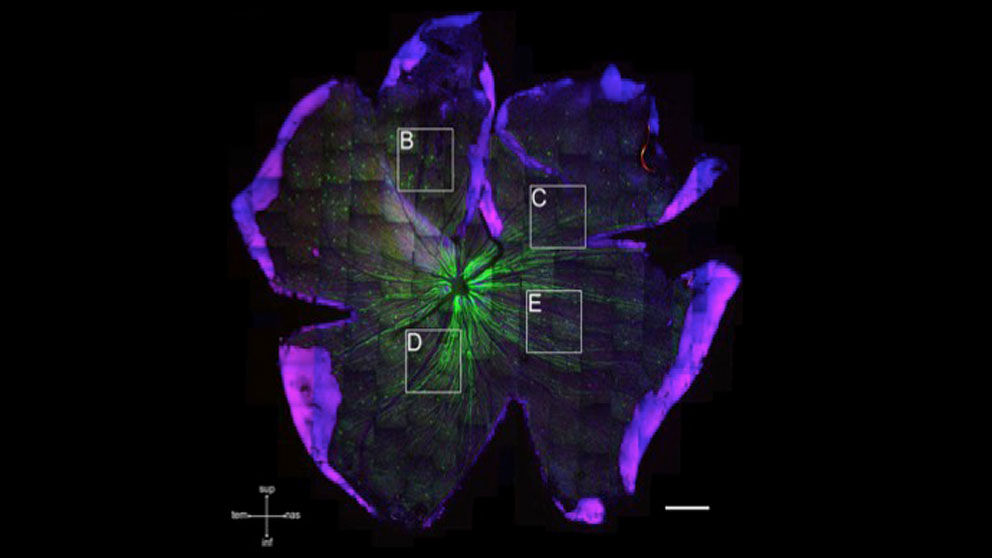 An immune response triggered by high pressure in the eye occurs early in glaucoma and has a protective effect on retinal cells, a Jackson Laboratory (JAX) research team led by Professor and Howard Hughes Medical Institute Investigator Simon W.M. John, Ph.D., reports in the Proceedings of the National Academy of Sciences.

In glaucoma, vision loss results from injury to retinal ganglion cells (RGCs) and the optic nerve. Increased pressure in the eye (intraocular pressure) is a risk factor for glaucoma, but exactly how high pressure damages cells in the eye is unknown.

John and colleagues set out to understand the earliest changes following intraocular pressure elevation in glaucoma. Their work suggests that immune changes occur very early and prior to any detected retinal ganglion cell dysfunction. The JAX researchers were intrigued that astrocytes, star-shaped cells that support RGCs and the optic nerve, made the immune protein complement C3.

C3 was found in eyes with high pressure where RGCs and optic nerves were undamaged as assessed by various methods. The researchers suggest that increased intraocular pressure may directly cause astrocytes to produce C3.

To understand the importance of C3 and astrocytes in glaucoma, mice that lacked C3 were used. Mice lacking C3 developed glaucoma more quickly than mice that did not make C3. The research provides evidence that astrocytes protect RGCs during periods of increased pressure in the eye.

Their research also provides evidence that the different complement genes have specialized functions in glaucoma. Notes Jeffrey Harder, a postdoctoral associate in the John lab and first author of the study, “The complement system consists of a number of molecules known as C1 to C9. Previous work has demonstrated that C1 and C5 are damaging in glaucoma. Unexpectedly our new work shows that C3 protects from glaucoma. Importantly, this new observation suggests that general inhibition of the complement system may not be a viable strategy for treatment of human glaucoma.”

Two coauthors of the paper, JAX Associate Professor Gareth Howell and Associate Professor Richard Libby of the University of Rochester Medical Center, were just awarded a five-year National Eye Institute grant to investigate the role of the endothelin system in glaucoma. This system maintains vascular function including constricting blood vessels, and harnessing some of its mechanisms could provide therapeutic targets for glaucoma.

Funding for the research was provided by the National Eye Institute (grants EY021525 and EY011721), the Glaucoma Research Foundation, the Glaucoma Foundation, the Barbara and Joseph Cohen Foundation and the Partridge Foundation. Simon John is an Investigator of the Howard Hughes Medical Institute, and a research assistant professor in the Department of Ophthalmology of Tufts University School of Medicine.