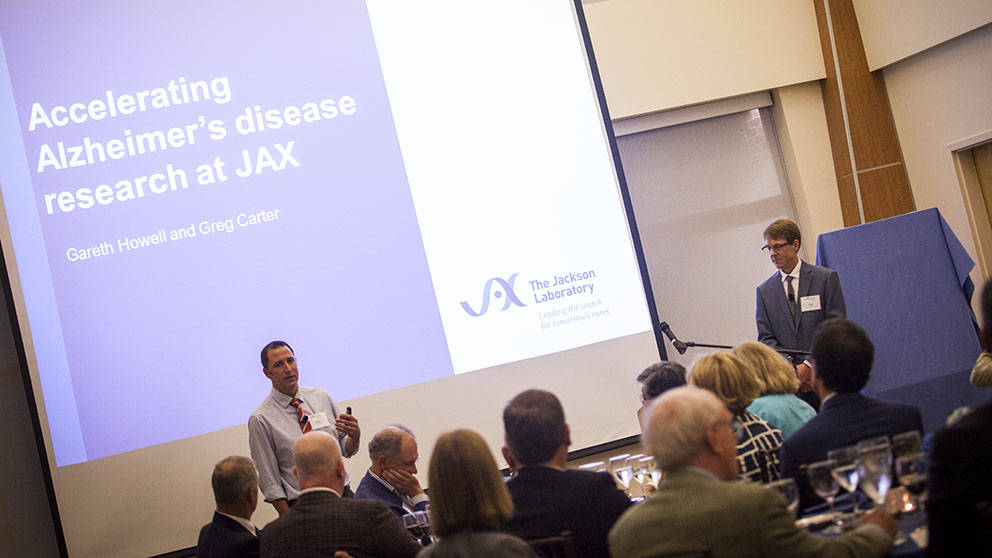 Indianapolis, Indiana and Bar Harbor, Maine — With the goal of breaking the bottleneck in developing new drugs to treat Alzheimer’s disease (AD), the National Institute of Aging (NIA) will provide a total of $25 million over five years to establish and fund the Alzheimer’s Disease Precision Models Center at Indiana University School of Medicine (IU) and The Jackson Laboratory (JAX). The Center will be jointly led by Drs. Bruce Lamb and Paul Territo at IU and Drs. Gareth Howell and Greg Carter at JAX.

An age-related neurodegenerative disease, AD is the leading cause of dementia among people age 65 and older. An estimated 5 million Americans have the disease, and it ranks among the top six causes of death. The Center will focus on creating dozens of new models of Alzheimer’s disease; study their physiology, behavior and genomes for disease relevance; and discover and test potential Alzheimer’s disease treatments.

To date, success rates in clinical trials of AD drugs after testing in animal models have been disappointing. Howell notes, “Existing mouse models for AD have provided important insights into aspects of AD biology, but have not been great preclinical models as they do not sufficiently model the disease. The combination of new gene editing technologies such as CRISPR/Cas9, large-scale genomic data resources, and advanced computational methods is enabling the rapid and precise development of mouse models of disease, even in complex diseases such as AD that involve multiple gene mutations.

“Our aim is to develop animal models that more closely mimic human AD and a preclinical testing pipeline through which novel therapies can be tested to greatly accelerate the process by which therapies are successfully moved forward to human AD clinical trials,” Howell says.

Bruce Lamb, Ph.D., executive director of the Stark Neurosciences Research Institute at the IU School of Medicine, noted that in the past decade researchers have identified many genetic variants that appear to be linked to Alzheimer's disease but whose roles are unknown.

"I would argue that those results indicate that we do not, even today, have a very good understanding of the biology of late-onset Alzheimer's disease," said Dr. Lamb, Roberts Family Professor of Alzheimer's Disease Research.

“The goal of this partnership is to create animal models that will, on a national level, accelerate the development of effective therapies for Alzheimer’s disease" said Jay L. Hess, M.D., Ph.D., M.H.S.A., dean of the IU School of Medicine and vice president for university clinical affairs.

The Alzheimer’s Disease Precision Models Center will build on the unique expertise of both institutions. IU’s strengths in neurodegenerative research include 25 years as home to the NIA-supported Indiana Alzheimer’s Disease Center, expertise in clinical drug testing and a leadership role in the national Alzheimer's Disease Neuroimaging Initiative.

JAX, which has the NIA-supported Nathan A. Shock Center of Excellence in the Basic Biology of Aging, has more than eight decades of expertise in mammalian genetics and disease modeling, as well as a special role in providing mouse and data resources to the international biomedical research community.

Recently JAX broke ground on a Center for Biometric Analysis, a world-class imaging suite that will enable high-throughput analysis and assessment of the new AD mouse models developed in the new Alzheimer’s center.

The NIA will provide $5 million per year in funding for five years, split between IU and JAX. The JAX Director’s Innovation Fund provided an additional $280,000 to support preliminary studies that contributed to the application.