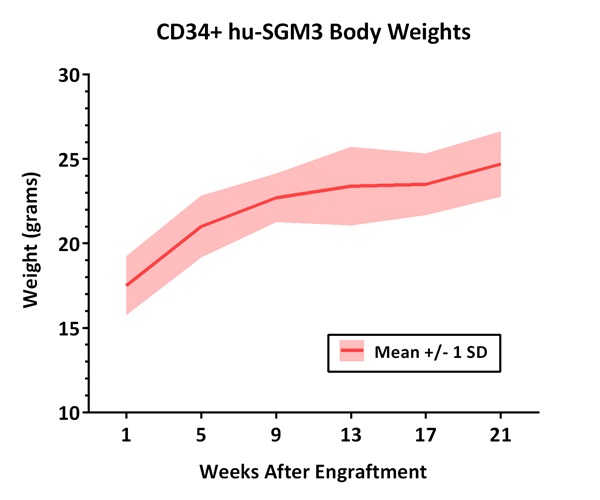 Similar to other immunodeficient strains, maintaining NSG-SGM3 mice in high health status (specific pathogen-free) vivaria promotes overall colony health. The fertility of hu-CD34+ NSG-SGM3 mice has not been tested. The engrafted human immune system is not heritable and would not be transmitted by breeding. A small percentage of hu-CD34+ NSG-SGM3 may develop macrophage activation syndrome (MAS). Please see our FAQ below for more details.

Q) What are the clinical signs of MAS in hu-SGM3 mice?

A) Mice with MAS typically present clinically as pale, lethargic, hunched, and in poor body condition. In rare cases, clinical disease may manifest as acute neurological signs, attributed to lymphohystiocytic accumulation within the central nervous system (brain and/or spinal cord).

Q) What factors contribute to the development of MAS?

A) Data collected to date show that MAS occurs in hu-CD34+ NSG-SGM3 due to the expression of human cytokines which promote myeloid cell engraftment and differentiation.
CD34+ donor. The incidence is stem cell donor specific, with approximately 25% of the donors showing increased incidence typically at 15-16 weeks post engraftment and precluding the use of these mice for studies.  In most cases, only a portion of the mice from the same donor will be affected.
Environment.  It is possible that progression to clinical disease may be exacerbated by exposure to environmental stressors such as suboptimal housing conditions or health status of the facility in which mice are housed.

Q) Is MAS the same as graft-versus-host disease (GvHD)?

A) This condition is histopathologically, and often clinically, distinct from post-transplantation GvHD, which is characterized by predominant T-cell infiltrates, with damage to the epithelia of the skin, lung, liver, and gastrointestinal tract.

Q) Does MAS develop in other CD34-humanized models like hu-NSGTM?

A) MAS has not been documented in CD34-humanized models involving NSGTM or other related strains. Histiocytosis has been described in some hu-NSGTM mice, although it does not always involve hemophagocytosis and it is not associated with clinical signs of MAS.

Q) How can the effects of MAS be minimized in a study?

A) The frequency of MAS varies among CD34+ cell donors for reasons that remain unclear. Consequently, selecting multiple CD34+ donors reduces the risk of loss if one donor becomes affected.  The use of younger mice may be helpful because age is a factor in the development of MAS.

Q) How can a suspected case of MAS be confirmed?

A) If this phenotype is suspected, a veterinarian should be consulted to rule out other conditions specific to immunocompromised mice. Histopathology is the optimal mechanism for confirming MAS, but the facility veterinarian may recommend additional assessments.

Q) Where can I learn more about MAS in hu-SGM3?