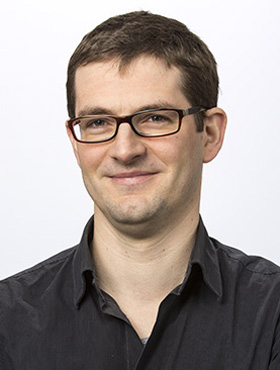 At the forefront of the hearing process, specialized sensory cells in the cochlear half of the inner ear transform sound into cellular signals. These ‘hair cells’ owe their name to the bundle of giant microvilli, or stereocilia, protruding at their apical membrane. Sound-induced deflection of the bundle affects the open state of cation channels located at stereocilia tips, depolarizing the cell and triggering the release of neurotransmitters at the basal end. Motion detection ability is direction-sensitive, as electric currents are only modulated by bundle deflections along the medio-lateral axis in the epithelial plane. Polarized morphogenesis of the stereocilia bundle within the plane is thus crucial for hearing. Early planar polarization is observed at two levels: 1) asymmetry of the cytoskeleton in each hair cell exemplified by the typical V-shaped or semicircular edge of the stereocilia bundle, and 2) "planar cell polarity" (PCP) reflected in the strikingly uniform orientation of bundles across neighboring cells. While coordinated bundle orientation in the sensory epithelium is known to require core PCP protein signaling, the mechanisms generating asymmetry in single cells or linking different levels of polarity remain unclear.

Prospective hair cells initially have an apical membrane covered with microvilli and are indistinguishable from epithelial neighbors. We focused on a seldom-studied portion of the apical membrane that becomes uniquely devoid of protrusions during development, before a subset of microvilli grow into stereocilia. This 'bare zone' hosts the polarized localization of two scaffolding proteins, mammalian Inscuteable (mInsc) and LGN (or Gpsm2), and the G protein subunit Gai. These proteins are collectively required for generating and expanding the bare zone, and act in part by restraining the polarity kinase aPKC to a complementary domain of the apical membrane. The interface between lateral mInsc, LGN and Gai and medial aPKC defines the stereocilia bundle edge, and generally influences the asymmetric distribution of the cytoskeleton in the epithelial plane.

During hair cell differentiation, the earliest morphological evidence of planar polarity is the translation of the primary cilium, or kinocilium, from a central to an eccentric position at the apex. Existing evidence suggests that core PCP signaling is not required for the eccentric move itself, but orients the translation in response to tissue-level cues to ensure a lateral placement. We showed that during normal hair cell differentiation, kinocilia that underwent translation become progressively less eccentric with the appearance of the bare zone and bundle. We also reported aberrant positioning of the kinocilium at this stage when mInsc, LGN and Gai function is impaired. Accordingly, we proposed a new model where the early translation bringing the kinocilium in very close proximity to the apical junction is followed by a relocalization towards the cell center triggered by the expansion of the intervening bare zone.

How do hair cells integrate multiple levels of polarity during development ?

One of our research interests is to understand how intrinsic polarity and tissue-level polarity (PCP) are interconnected. By relocalizing the kinocilium in reference with the forming edge of the stereocilia bundle, mInsc/LGN/Gai are good candidates to couple these two levels of planar polarity. Interestingly, inactivating Gai, but not mInsc/LGN, impairs the lateral orientation of eccentric kinocilia in addition to disrupting bundle asymmetry in each cell. Therefore, Gai proteins might relay a core PCP signal, and the well-characterized binding between Gai and LGN could be a central aspect of the coupling mechanism.

At the cell intrinsic level, one research direction is to address how prospective hair cells break the planar symmetry characteristic of most epithelial cells. One goal is to identify the molecular machinery driving the eccentric translation of the primary cilium, and examine its interaction with mInsc/LGN/Gai defining the bundle edge. Further down the differentiation process, we are also testing the hypothesis that planar polarity could directly influence other important instances of cytoskeletal asymmetry. One of them is the staircase-like architecture of the mature hair bundle, where establishment of stereocilia rows of decreasing heights is important for direction-sensitivity to sound stimuli.

In addition to broadening our understanding of cell polarity and its role in the sensory development of the inner ear, this work has important implications for human health. Most known proteins involved in forming the mechanosensory hair bundle have been identified by mapping loci associated with hereditary hearing loss. Proteins regulating cytoskeleton polarity appear to be equally relevant to hearing, as mutations in the LGN (or Gpsm2) gene were recently reported to cause non-syndromic hearing loss in unrelated families. Diagnosing and potentially correcting hereditary hearing defects requires raising mouse models to study the localization, temporal requirement and exact function of the affected proteins.

In contrast to lower vertebrates, mammalian hair cells cannot regenerate and are prone to damage during life following disease or injury. Perhaps the most promising therapeutic approach to treat hair cell loss is to force neighboring non-sensory cells to adopt a hair cell development program de novo. Despite remarkable progress, one challenge ahead is to ensure that newly generated hair cells undergo complete morphogenesis. Clarifying how polarization of the cytoskeleton during development transforms microvilli into an asymmetric bundle of stereocilia tuned for sound perception will certainly aid hair cell regeneration strategies in adults.

Sound perception relies on the planar polarization of the mechanosensory hair cell apex, which develops a V-shaped stereocilia bundle pointing toward an eccentric kinocilium. It remains unknown how intrinsically asymmetric bundles arise and are concomitantly oriented in the tissue. We report here that mInsc, LGN, and Gαi proteins, which classically regulate mitotic spindle orientation, are polarized in a lateral microvilli-free region, or "bare zone," at the apical hair cell surface. By creating and extending the bare zone, these proteins trigger a relocalization of the eccentric kinocilium midway toward the cell center. aPKC is restrained medially by mInsc/LGN/Gαi, resulting in compartmentalization of the apical surface that imparts the V-shaped distribution of stereocilia and brings the asymmetric bundle in register with the relocalized kinocilium. Gαi is additionally required for lateral orientation of cochlear hair cells, providing a possible mechanism to couple the emergence of asymmetric stereocilia bundles with planar cell polarity.
Copyright © 2013 Elsevier Inc. All rights reserved.
View full list of publications

I am interested in using genetic tools and mouse models to study novel knock-outs and rare genetic conditions with the...

Dissecting the regulation of G-protein signaling in inner ear development

Investigating inner ear development, focusing on the role of cytoskeleton polarization in sensory function and hearing loss, with a goal to...

A research team led by Basile Tarchini has found two new proteins that are essential to the correct elongation of stereocilia, tiny...

My research focuses on the development of the inner ear, and the hair cells responsible for hearing.

Grant funding will support Basile Tarchini’s studies into how defects in the architecture of sensory cells perceiving sounds...

A new paper in PNAS offers new insights into the proteins that influence our ability to perceive sound direction and...

Work by a team including JAX Assistant Professor Basile Tarchini, Ph.D., is shedding light on the mechanism that directs the...

Basile Tarchini, Ph.D., is working to understand the basic mechanisms underlying hair cell development, with the goal of...

I analyze whole exome, whole genome, and long read sequences, in combination with other sequencing technologies to help identify causative...

By harnessing the most advanced data-mining tools, JAX Professor Carol Bult is leading the hunt for suspect genes that...