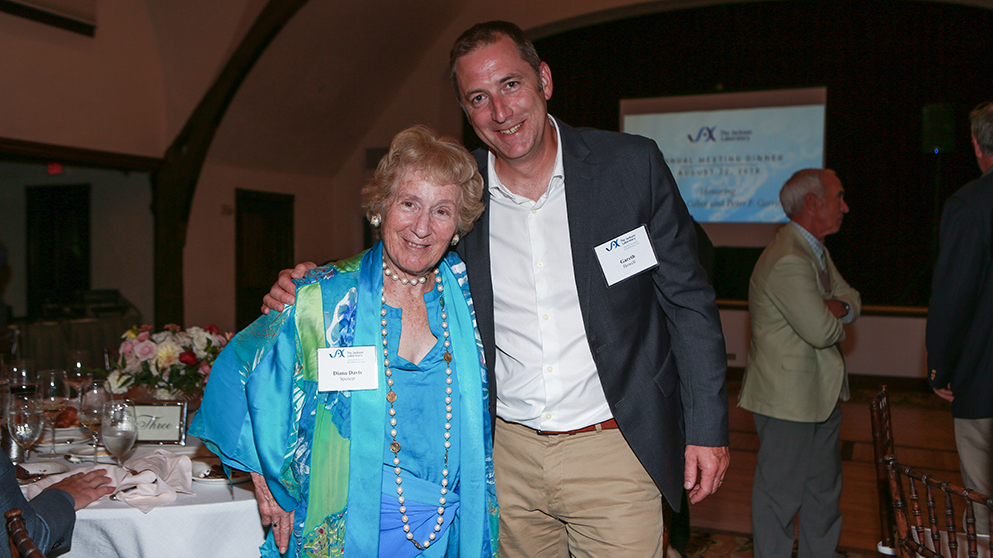 The Diana Davis Spencer Foundation has pledged $4 million to further support vision research at The Jackson Laboratory (JAX). The gift will fund the nonprofit biomedical research institution’s scientific research and training activities in the field of neurodegenerative diseases of the eye, including graduate and postdoctoral fellowship training and research projects in glaucoma, age-related macular degeneration (AMD) and ocular signs of Alzheimer’s disease.

The World Health Organization estimates that approximately 39 million people worldwide are blind, and approximately 285 million are visually impaired. While trauma and infection can cause impairment, most human eye diseases in developed countries are chronic disorders involving retinal neurodegeneration (loss to nerve cells found in a structure in the back of the eye, called the retina), with a genetic component. Such disorders have no curative treatment, partly because when diagnosed, the neurodegeneration has progressed to an irreversible stage.

“We are enthusiastic and hopeful for the future of ocular disease research, and are honored to fund the dedicated researchers at JAX as they explore the eye as a biomarker for dementia,” said Diana Davis Spencer, executive chairman of the Foundation. “It is our priority to ensure the gift of sight for all and gain a greater understanding into the neurodegenerative diseases that rob us of sight and mind, and we believe there is no better institution to conduct this work than The Jackson Laboratory.”

“We are so grateful for to Diana Davis Spencer and her foundation for this transformative gift,” said Edison T. Liu, M.D., president and CEO of the Laboratory. “It underscores the importance of the eye as the portal to the brain.”

The Foundation has donated an initial $2 million research grant for the study of complex ocular and neurodegenerative diseases focusing on glaucoma, AMD and dementias, and is pledging another $2 million challenge grant, which will be met by an additional $2 million in philanthropy, for a total $6 million investment into vision research at the Laboratory.

The retina: window to the brain

Research faculty at the Laboratory include renowned experts exploring the biology and genetics of vision and neurodegenerative disorders that cause dementias. Nearly one-third of JAX faculty, along with their students, postdoctoral trainees and laboratory staff, conduct research on diseases of the neurological and sensory systems, including glaucoma, AMD and Alzheimer’s disease. In addition, many of these researchers are working to understand the fundamental processes of aging that greatly increase risk for these devastating diseases.

Associate professor Gareth Howell, Ph.D., who also holds the Diana Davis Spencer Foundation Chair for Glaucoma Research, is one such researcher: he applies genetics and genomics approaches to study age-related neurodegenerative diseases including Alzheimer’s disease, dementia and glaucoma. His research has shown that there are several connections between Alzheimer's disease and glaucoma. “Multiple studies are now showing similar biological processes are disrupted in glaucoma and dementias such as Alzheimer’s disease, including changes to immune-like cells and blood vessels. This suggests similar strategies can be tested to treat both common ocular and brain disorders,” he said.

Further, because of the retina’s direct interaction with the brain, the eye is an accessible platform through which to study neural development, including tracking the earliest stages of Alzheimer’s and other dementias. “One area that is gaining support is the potential for tracking changes in the eye to monitor changes in the brain. This is because the retina is essentially brain-like tissue that can be observed non-invasively,” said Howell.

Other current JAX pioneers involved in ocular research include Patsy Nishina, Ph.D., Martin Pera, Ph.D., Rob Burgess, Ph.D., Jüergen Naggert, Ph.D., Ryan Tewhey, Ph.D., and Greg Carter, Ph.D. Their expertise is being applied to improving our understanding of the genetic and environmental underpinnings as we seek earlier detection of, and interventions for, AMD and many other ophthalmic and neurological diseases.

The power of philanthropy

The Laboratory is uniquely positioned to conduct this research due to its ability to seamlessly integrate mouse and human studies in order to decipher the genetic and molecular causes of complex diseases.

“The Jackson Laboratory and the Diana Davis Spencer Foundation share a deep commitment to significantly impacting the health of future generations through the identification of the underlying causes of vision loss to identify novel therapeutic strategies,” said Howell. “We are eager to leverage this generous gift to incorporate genetic complexity into mouse model systems to discover the mechanisms of neurodegenerative diseases of the eye and how the earliest changes in brain disorders can be tracked in the retina.”

Vision research has been a significant part of JAX’s mission for decades. In the future, this gift will enable JAX to create a Center to continue this rich history and combine it with modern scientific approaches to study the root causes of common ocular diseases. Researchers will aim to build a picture of the processes that drive common ocular diseases such as glaucoma and AMD, using cutting-edge methods to understand how individual cells contribute to disease onset and progression. JAX researchers will also seek to determine the potential for monitoring the retina to identify those most at risk of dementias. Importantly, this gift enables the establishment of training opportunities that provide graduate students and postdoctoral fellows the opportunity to be mentored by world-class experts in ocular biology, genetics and genomics, disease modeling and computational biology.

“We look forward to welcoming the next generation of vision scientists to JAX and continuing this important research that we hope will impact many patients and families,” said Howell.

A Vision for the Future of SightJAX researchers are shedding light on the mechanisms of eye diseases such as glaucoma and macular degeneration, as well as Alzheimer’s and other neurodegenerative diseases – treating the eye as a window to the brain.vision-research