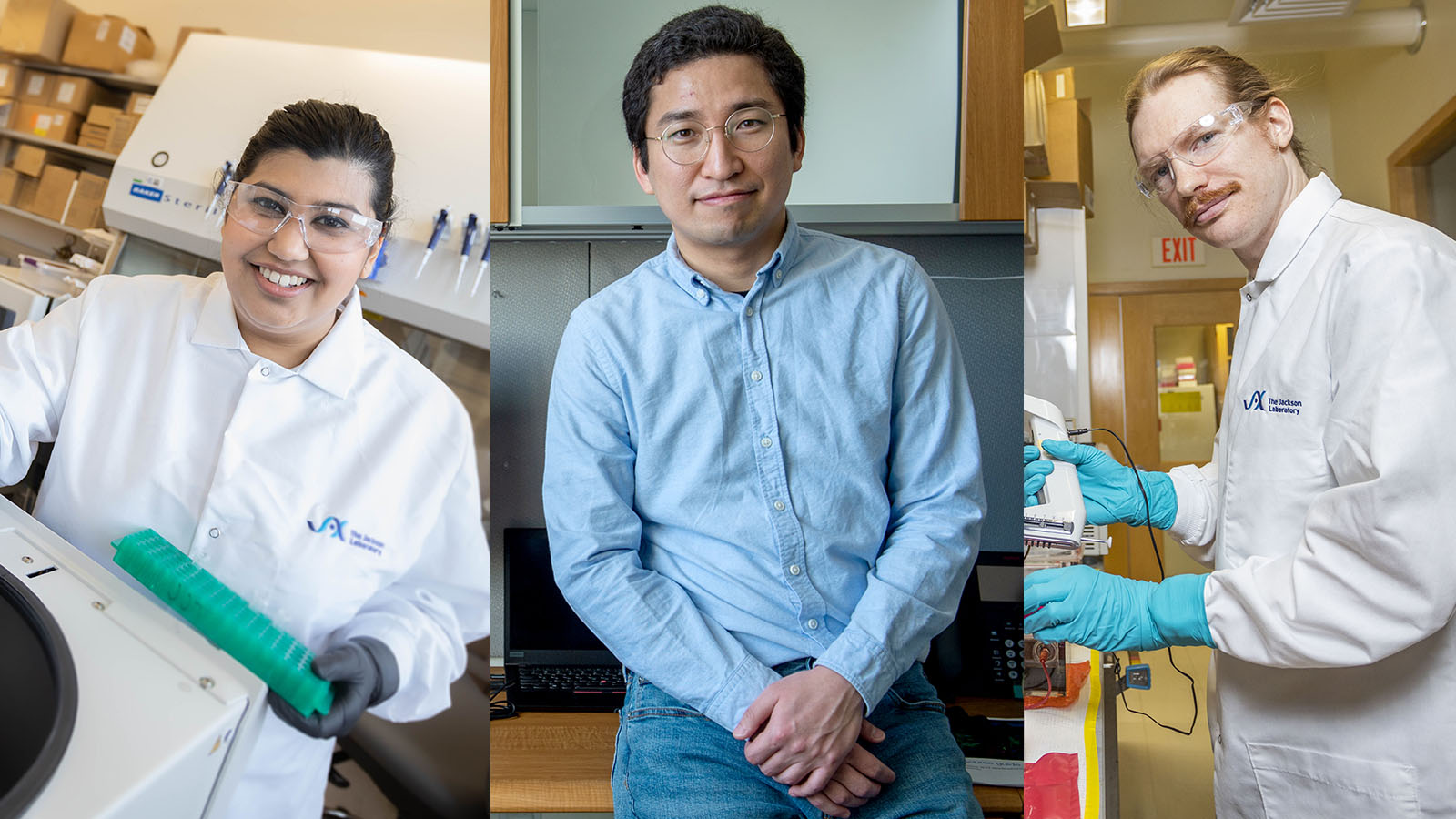 The Jackson Laboratory is proud to announce the 2022 recipients of the JAX Postdoctoral Scholar award. Eric Bogenschutz, Jayna Mistry, and Kwondo Kim represent forward-thinking research, proven leadership, and engagement with the scientific community.

The JAX Scholars program is a prestigious new tradition at JAX meant to recognize not only the strength of their research abilities, but their diversity of ideas, leadership qualities, and dedication to the scientific community.

The three recipients of the 2022 awards, Eric Bogenschutz, Jayna Mistry, and Kwondo Kim reflect the diversity of backgrounds that postdocs bring to JAX.

“We are excited to recruit postdocs with academic backgrounds in biology, bioinformatics, biomedical engineering, computer science, genetics, and neuroscience from top institutions around the world,” says  Meredith TheemanAs Director of Predoctoral & Postdoctoral Education at The Jackson Laboratory, Meredith oversees flexible, individualized training programs that endeavor to develop a diverse community of well-rounded, collaborative scientific leaders. Meredith Theeman , Program Director of Postdoc and Predoc Education. “Their work also highlights the variety of genetics-related questions and disease phenomena we investigate at the lab.”

Bogenschutz is a Postdoctoral Associate in the laboratory of Associate Professor Steve Murray, Ph.D.Dissects the genetic mechanisms of craniofacial development and dysmorphology, and develops new genetic tools and resources for the scientific community.Stephen Murray , Ph.D. His research centers on mammalian embryo development, with a specific focus on congenital diaphragmatic hernia (CDH). CDH is a rare birth defect in which a hole in the diaphragm allows core abdominal organs to enter the chest, impairing normal lung development. He recently received a NIH F32 grant associated with this research, something that JAX helped make possible.

“It was not until I met Steve that I became aware of the specific research JAX takes part in and specifically the birth defect modeling done by Murray Lab,” says Bogenschutz, who first met Murray in 2018 at the American Society for Human Genetics conference in San Diego.

Bogenschutz knew that mouse models are the only viable option to study congenital diaphragmatic hernia (CDH) genetics in vivo, so he was eager to train further in mouse genetics. He joined Murray's team in 2020 and is now able to investigate novel CDH-associated genetic variants initially identified in human patients. He also volunteers to support predoctoral students and is highly engaged with the JAX postdoc community; he was recently nominated to co-chair of the JAX Postdoctoral Association.

“I’m thrilled to have him in the lab," says Murray. "I’m certain he will have a lasting impact on my research program and the field.”

Bogenschutz hopes that his research will lead to the development of better mouse embryonic tools and platforms and result in critical insights into the genetics of CDH.

“I have always found the idea of a shared genetic plan that shapes embryonic development across animals incredibly fascinating,” says Bogenschutz, “being able to contribute to our understanding of this complex process will always excite me!”

Mistry completed her doctoral work in England at the University of East Anglia. She is studying how pre-leukemic cells interact with their microenvironment, causing alterations such as accelerated aging. These alterations can create a favorable environment for selective advantage of the preleukemic cells which can accelerate the transformation to leukemia. Her work culminated in eight primary research papers, on four of which Jayna was first author.

Mistry joined the research team in Professor Jennifer Trowbridge, Ph.D.Researches regulation of stem cells in the blood in normal development, aging and leukemia transformation.Jennifer Trowbridge’s lab in May 2021 and has been a key contributor to many projects. She is also the primary mentor for the post-baccalaureate fellow in the lab.

Mistry’s hypothesis is groundbreaking, and she has developed ex vivo and in vivo assays to test her hypothesis and develop preliminary data, which looks promising. Developing an impressive dataset that Trowbridge calls a “goldmine of opportunity,” Mistry may be in a position to test hypotheses beyond the initial targets, giving her research a wide area to expand. 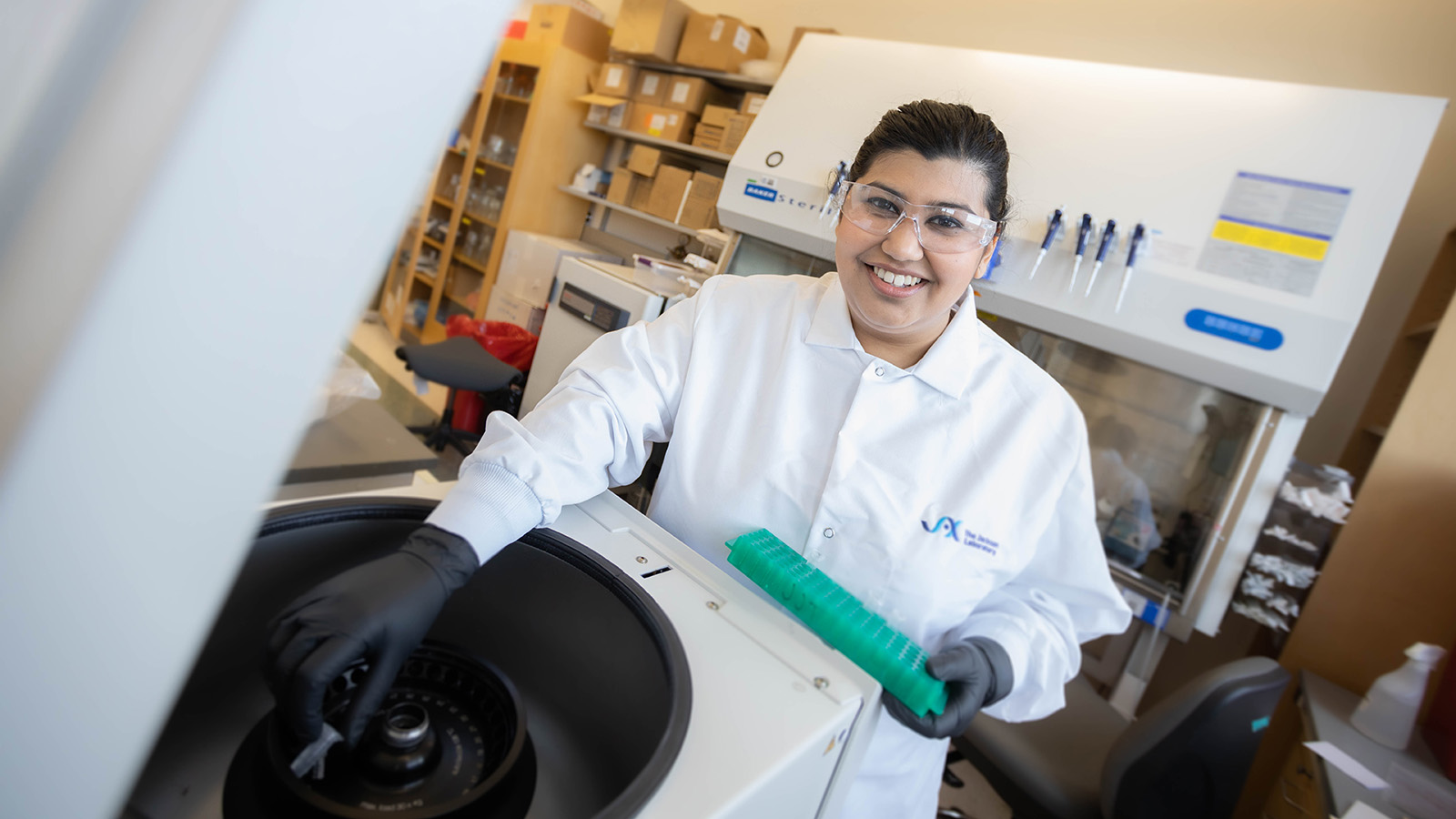 "Dr. Trowbridge is a leader in the field of aging, stem cell biology, and murine models of clonal hematopoiesis,” says Mistry, who wants to one day be a principal investigator to investigate the role of the bone marrow microenvironment in both normal and malignant hematopoiesis.

“JAX is a great place to do research,” says Mistry, “it has provided me with the opportunity to learn new skills and laboratory techniques and grow as an independent scientist. One thing I really like about JAX is the community, it is a very collaborative environment and people are eager to help.”

"Jayna is a thought leader in the lab, fearless, rigorous, independent, and a gifted public speaker," says Trowbridge. "She has excellent hands at the bench, and mentors and collaborates with other lab members in a generous, kind, and empathetic manner.”

“Our genomes are changing generation to generation, caused by diverse mechanisms, of which the simplest one is mutation. Mutation can happen in one letter of the genome or multiple letters of the genome,” Kim explains. “For the latter case, we call it structural variation. Using only genome data and computers, I’m studying the functional impact of structural variation on gene regulation and disease, and how it evolves in the human population.”

Kim is pro-actively learning new skills and concepts for his research and has put together a study group covering advanced phylogenetic analyses techniques that might be applied to the study of structural variation across the genome. Lee says Kim really stands out “because of his research productivity and his potential as an independent researcher.”

This productivity can be shown in Kim’s first-authored paper in Nature Genetics, published in 2020. For this paper, Kim made his own scripts for most of the data analyses and created the computational methods to enhance to quality of the analyses. Described as “passionate, tenacious, and flexible” Kim has been universally praised as a researcher who is a pleasure to work with, so much so that his old professors have voiced their desire for future collaboration.

Kim’s hope is to better understand the significance of structural variation in the evolutionary context, and he believes this will be impactful for human health as well as evolutionary studies.

“The research environment at JAX, to collaborate with colleagues with diverse backgrounds and validate my computational analyses anytime was appealing to me,” says Kim.