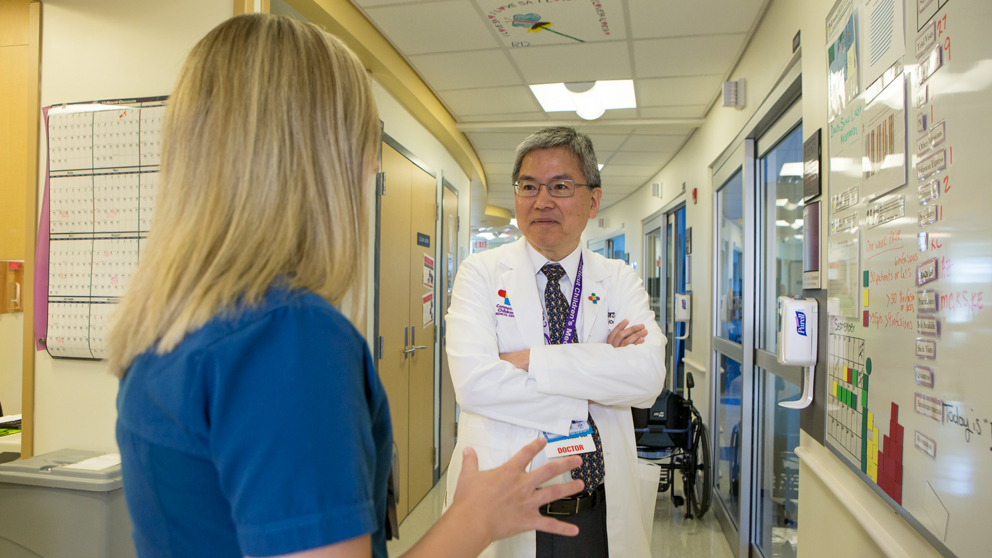 Doctors who treat rare pediatric cancers face an awful truth: many of their patients will die far too young. At JAX, Ching Lau, M.D., is working to find effective therapies and test them against patients’ own tumors in specially made patient derived xenotype (PDX) mice. The quiet but forceful research physician and the specialized mice form an unlikely team, but they are leaders in the fight to improve therapies and provide a high quality of life for patients and their families.

The tragedy of childhood cancers is overwhelming.

Clinicians who face it head on work relentlessly to change outcomes, doing everything they can to extend lives. Sadly, with current clinical tools, they cannot change the reality that many of their patients will die far, far too young. And even those who are saved in childhood may have so much therapy-associated toxicity that their bodies succumb to complications in early adulthood.

Changing those sad realities requires better research tools and new ways of thinking. The Jackson Laboratory (JAX) has both. JAX Professor Ching Lau, M.D., Ph.D.Dr. Lau specializes in pediatric brain and bone tumor research. His clinical interests include neuro-oncology, solid tumors, and osteosarcoma.Ching Lau, M.D., Ph.D., who is also head of Hematology and Oncology at Connecticut Children’s Medical Center and the University of Connecticut School of Medicine, is on a mission to improve pediatric cancer outcomes. Lau combines advanced research with clinical practice, bridging the gaps between the two fields. On the research side, he is working with a powerful preclinical research platform at JAX, known as patient derived xenograft (PDX) mouse models. The combination provides exciting opportunities for progress and new hope for patients.

Now we can use the latest genomic technologies and the new PDX models to make the preclinical research much more efficient.

PDX mice are engineered to accept human tissues, so they can be engrafted with human patient tumors. The tumors grow in an in vivo environment, within the mouse, which can be further engineered to emulate many aspects of tumor microenvironments in humans. PDX mice can be used for experiments that simply can’t be done using cancer cell lines in culture or in human patients.

With the PDX platform, Lau has unprecedented capability to find drugs that actually work for pediatric cancers. But despite the new tools and urgency of his work, he knows all too well that improving cancer therapy is a complex, difficult task that doesn’t reward haste.

“There are no easy solutions,” Lau says. “We need to be systematic. Let’s look at the genetic changes in patient’s tumors, including those for whom treatment has failed. Let’s create models—a large number of PDX mouse models—to address the unmet clinical needs of these patients. It’s an old-school way of thinking, but now we can use the latest genomic technologies and the new PDX models to make the preclinical research much more efficient.”

Given the plight of young patients, you’d think that there would be a focus on therapy development for pediatric cancers. After all, adult cancers have seen encouraging progress in drug development. In 2018 alone, 18 new drugs, new indications for approved drugs, or new combination therapies were approved by the FDA. But since 1978, a total of only seven new drugs for pediatric cancers have been approved.

Why? For one thing, many kinds of pediatric cancer are exceedingly rare. Some have only 60 or 70 cases diagnosed in the United States each year, and fewer than 1,000 globally. For such cancers, international collaborations are absolutely necessary to obtain enough samples to do meaningful research. With different countries having different regulations and all the administrative hurdles involved, developing the collaborations to do such work is extremely difficult even before the hard work of the actual research begins.

“It can be thought about at several levels,” says Lau. “You have to identify targets, obtain enough samples to reach statistical significance, generate mice from all these sources, and develop the systems to test drugs. Finally, once a target and a drug are validated in the mice, you must consider if you can actually bring together an international clinical trial. It takes a lot of effort. But if there’s a patient need, then we have to figure out a way, we have to put in the effort.”

Such an effort is daunting, but if anyone can do it, Lau may be the one. “Ching is the model of a leader,” says Charles Keller, M.D. “He’s kind and generous, but he also has the ability to bring groups together to tackle big problems.” Keller met Lau in residency in Texas, and the two have been friends and collaborators since. Keller now leads the Children’s Cancer Therapy Development Institute in Oregon, whose mission is to make childhood cancer universally survivable. He’s had some very encouraging research results using PDX mice to identify a treatment for rhabdomyosarcoma, a rare pediatric cancer, and he sees Lau and JAX as crucial to advancing the field.

“Ching is brilliant and thinks on a global scale,” says Keller. “I believe in his approach. And JAX as a non-profit institution has pioneered the effort to build PDXs for even very rare childhood cancers, something that few other companies and organizations have been able or willing to do.”

From tragedy, hope and closureDoctors who treat rare pediatric cancers face an awful truth: many of their patients will die far too young. from-tragedy-hope-and-closure

The importance of preclinical research

Using immunocompromised mice for tissue engraftment is not a new concept. Indeed, they were first used in the 1980s, and more recently they have been widely adopted for cancer research around the country. Lau still collaborates with former colleagues at the Texas Children’s Hospital and Baylor College of Medicine, where he had previously developed large PDX panels for his research. But over the past decade, JAX has been at the forefront of efforts to develop more models and improve their usefulness.

JAX has worked with clinical cancer centers and individual surgeons around the country to obtain a large number of well-characterized patient samples, representing many different kinds of cancers. Data from the wide array of samples is vital to guiding future therapy development, and JAX has developed PDX Finder, a global catalog for PDX models and their associated data. Also, JAX PDX mice can now be engineered to not only accept human tissues but to simulate a human immune response as well, which differs in important ways from that of a mouse.

“We use PDX models to test small molecule (drug) treatments in pediatric cancers, and it’s a very powerful platform for that,” says Jim Keck, senior director for innovation and product development at JAX. Keck worked with Keller on the rhabdomyosarcoma research, and he appreciates the profound benefits of such work. But, he says, in a way, it’s just scratching the surface of what the PDX platform can do. “You can have two tumors that look similar in every way you can analyze, yet they react differently to the same therapy. Why is that? With PDX, we have the ability to really delve into this area to improve how we characterize tumors and develop therapies.”

JAX is doing more than just acquiring its own data, however. Information from a wide array of PDX samples is vital to guiding future therapy development, but it has been very difficult to obtain. Led by Associate Professor Jeffrey Chuang, Ph.D.Computational studies of cancer image and sequence data to improve treatment outcomesJeffrey Chuang, Ph.D., JAX is working to consolidate PDX data from across research institutions, which has previously lacked standardization and accessibility. The PDX Data Commons and Coordination Center is a National Cancer Institute-funded initiative that provides innovative computational approaches to organize the data analysis of PDX studies from across the country. JAX Professor Carol Bult, Ph.D.Bridges the digital biology divide, by integrating computation and informatics with biomedical research.Carol Bult, Ph.D., has also led the development of PDXFinder, an online global catalog for PDX models and their associated data.

Specialized PDX mice can provide crucial insight for cancer researchers. Cancers are known to be highly heterogeneous, meaning they can differ in important ways between individual patients. But if enough PDX models are developed from different cancer patients, they can mimic the diversity of tumors in the patient population, including the different ways they respond to therapies. Using a panel of such mice for drug testing can provide the confidence needed to accelerate the pace of the next step: a clinical trial.

“If a drug tests well across a whole panel of mice, if the drug is really that effective for a particular target in the different tumors, then, in theory, we don’t have to run a big trial,” says Lau. “We can focus on the patients with that therapeutic target and run an effective study with a lower number of patients. The work we do in the preclinical research is vital—the time spent at that step can provide what we need to help patients in the clinic.”

Lau and colleagues recently developed a computational method to identify approved drugs that might work for cancers with genomics data but no therapeutic targets. In a process known as systems biology-based drug repositioning, the researchers were able to analyze data for highly complex and heterogeneous medulloblastoma (the most common malignant pediatric brain cancer) tumor samples and identify eight possible drugs for them, including five previously approved to treat heart failure. One of the heart drugs, digoxin, showed survival benefits when tested in PDX mouse models for medulloblastoma, and the results of their study were published recently in Science Translational Medicine. The method can be applied to other cancers as well, but it depends on effective PDX models for its preclinical testing.

And beyond that? Keck is interested in driving progress in cancer immunotherapy, perhaps the most talked about new area of cancer medicine. Unfortunately, immunotherapy hasn’t been effective for pediatric tumors. Yet.

“Pediatric tumors don’t respond to immunotherapy as well as tumors from adults,” says Keck. “We don’t know why, though we have some clues based on how the immune system changes as children grow to adulthood. This is a very exciting area with a lot of potential, but there’s a lot still to learn and many mechanisms to explore. We can study these questions at the molecular level using our PDX platform. We hope that what we learn will give us the insight we need to expand immunotherapy to pediatric cancer patients.”

Immunotherapies also have the potential to kill cancer cells with far fewer side effects than current treatment regimens, an important issue for pediatric patients. It’s something that weighs heavily on Lau’s mind as he seeks better therapies of all kinds.

“We’re having more long-term survivors now, which is wonderful, but we’re also realizing the price some patients pay,” he says. “Some children are susceptible to permanent hearing loss or nerve damage and occasionally to radiation necrosis, in which the brain is heavily damaged by radiation therapy for brain cancer. So there’s still a long way to go as we try to balance survival with quality of life, and we’re having to rethink our strategies for how best to treat these tumors. And to do that, we will turn to mouse models first.”

In the struggle against pediatric cancer, one may not think that a quiet, methodical physician-scientist and a panel of mice would be among its most formidable combatants. But together they’re gaining important insights into cancer’s weaknesses and building new hope for patients.