The (current) imprecision of precision medicine 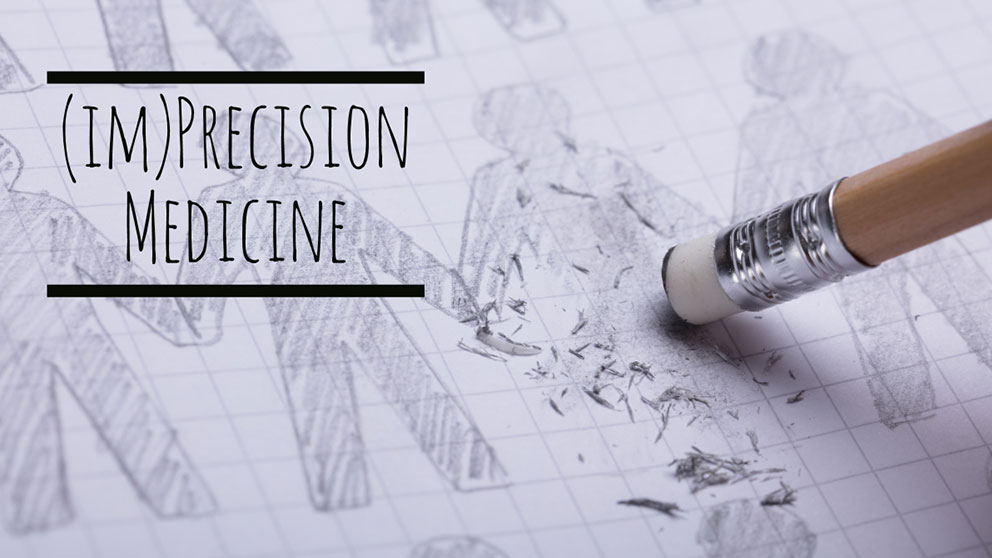 By now, anyone with interest in healthcare has seen at least a few articles about precision or personalized medicine*. While its advent in the clinic has been somewhat slower than one might have hoped, as is the case with so many things in medicine, it’s generally accepted now that it will change medicine as we know it in the relatively near future. There are already notable successes in specific areas — the diagnosis of early childhood rare diseases, for example, often accompanied by important treatment insight, and oncology (cancer) and pharmacogenomics (right drug at the right dose at the right time) are also seeing important progress. In addition, large precision medicine initiatives such as the U.K.’s 100k Genome Project and the U.S.’s new All of Us program are making news on a regular basis.

But a lot of work and expense must go into implementing such significant change. It requires acquiring, analyzing and applying patient data that is more detailed, accurate and comprehensive than ever before. It requires overcoming built-in barriers within the healthcare system, such as the current electronic health systems (EHRs) and patient privacy laws, which make it very difficult to pool sufficient patient data. And it requires a considerable amount of physician and patient education to overcome confusion about what the different kinds of tests and personalized data can and cannot tell people about their health. Here, therefore, are a few insights into what’s true, what’s possible, what’s useful, and what’s not any of the above, as well as what to watch out for in the months and years ahead.

*These terms have been co-opted to mean a confusing number of things, but here they are defined as using a patient’s individual data — genomic, biomarker, and biometric, as well as behavioral, environmental, etc. — to inform and improve medical care for him or her.

Genetic insights. Or not.

There is a lot of confusion around genetics. If you send spit to 23AndMe (or any number of genetic testing places these days), how does that differ from a genome or exome sequence from a clinical lab? What information and insight can we get from our gene variants and/or from our genomic sequence? How much is your health and wellbeing determined by one’s genome sequence? Is sequencing someone who’s apparently healthy have any benefit or is it just a waste of money? And so on.

First, spit. There are important differences between the direct-to-consumer (DTC) kind of genetic tests and clinical exome and genome sequencing. Briefly, the DTC tests usually assess single DNA bases that vary between individuals. They can provide results for quite a lot of them, even upwards of a million bases, but compared to the size of the full genome — about 3.2 billion bases — it’s a very small sampling indeed. As the market heats up, a dizzying variety of DTC tests have emerged, with too many based on little or at best shaky data. An example are those that purport to assess athletic talent and/or the right fitness regimen for a fee, but unfortunately don’t yield useful insight. Even the few that have received FDA approval come with serious limitations, and there have been several examples of multiple tests yielding different results for the same person and inaccurate variant calls in disease genes.

Clinical sequencing is done in a certified lab, and in addition to specific disease genes it can cover all exomes (the protein-coding regions of the genome, adding up to about 1.5% of the total sequence) and the full genome itself. Modern sequencing is very accurate, so clinical sequencing results can be analyzed with high confidence. The problem is, there is still relatively little understanding of what most genetic variants actually mean in a medical context. These so-called variants of uncertain significance (VUSs) still vastly outnumber those for which we can confidently predict a clinical consequence — such as those known to cause a genetic disease — underscoring how much work remains to be done in the genomics field.

A common term for our genetic code is “blueprint of life.” Sequencing it and learning every part of the code, therefore, was supposed to provide a full picture of who we are and predict the health challenges we might face. It hasn’t really worked out that way. It’s just too complicated.

Many genetic alterations, such as structural variants, change the number or orientation of functioning genes, not the sequence itself. There are healthy people walking around with disruptive mutations in genes that, according to our current biological knowledge, should be harmful. Even for well-studied “disease-causing” genes, many people with mutations in them have no signs of the expected disease. The exact reasons in each case are somewhat unclear, but given that humans have significant genetic differences between individuals and also significant differences in environments and behaviors, it’s reasonable to surmise that most gene variations are not deterministic. That is, they bestow relative disease susceptibility or resistance, not a certainty that the disease will or will not manifest.

At the same time, certain variants and mutations are strongly associated with disease (BRCA for cancer, mutations in specific genes for many rare genetic diseases). As more human genome sequences are completed and pooled, clinical sequencing is providing additional medical insights every day. For example, it is helping researchers better understand, bit by bit, the complexities of cancer cells and why certain cancers are so resistant to therapy and/or so likely to recur. Obviously, the potential benefits of such knowledge are enormous, and the pursuit of them largely propels precision medicine efforts around the globe.

While sequencing for rare disease diagnosis and cancer therapy guidance is now widely accepted, many have advocated against large-scale sequencing of healthy individuals, at least not yet. This is understandable in the current context, given the costs involved and lack of predictive insight. Many who have their genomes sequenced do so out of curiosity and/or for a great writing topic, not for medical insight.

But there’s one area of the United States where large numbers of people of all kinds are being sequenced: rural Pennsylvania. That’s where the Geisinger Health System is based. Geisinger is somewhat unique, in that it serves as both insurer and provider for its customers. Therefore, the more it can help its patient population stay healthy and lower the cost of care, the better it will do on the insurance side. This provides it with opportunities to experiment with what it provides in its clinics. And experiment it has, particularly with genetic sequencing, through a program it calls MyCode.

MyCode offers exome sequencing (all coding regions of the genome, about 1.5% of the total sequence) to all its customers, and interestingly, a large number of people have signed on. The numbers keep going up, but there are now approaching 200,000 people enrolled. That’s a lot of exomes. And with clinical data accumulated over years for the patients, and those of family for most as well, the program provides a real-world look at what might be possible with numbers this large and various forms of data this integrated, including risks and benefits.

The preliminary results are highly intriguing. Analysis of the first 50,000+ exomes sequenced indicate that roughly 3.5% of the participants may harbor a disease-causing genetic variant about which they were unaware, even though the list of such variants is deliberately small, due to the uncertainty associated with most variants. There have been several specific examples of cancer caught early, familial hypercholesterolemia identified and managed, and so on. Even if nothing manifests, monitoring protocols are put in place. And the return of results is managed with medical care and genetic counseling support to help each patient understand the ramifications of the data.

The Geisinger model is limited, but it provides an intriguing indication of what precision medicine may become if carefully coordinated and implemented on a large scale. The take-home lessons may change as more data are compiled, of course, but as of now, even with all the imprecision still surrounding precision medicine, the message is that there may be more benefits to wide-spread sequencing of healthy people than originally anticipated.