Your family could benefit from cardiovascular genetic testing 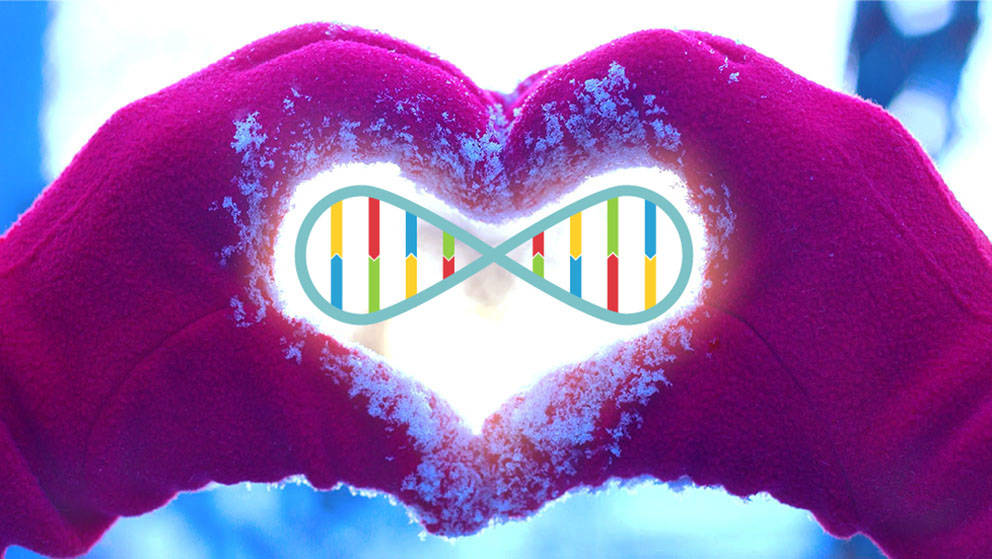 Seventy-year-old Peggy Agar has known since she was in her 40s that she and her 12 siblings might be at risk for familial cardiomyopathy, a genetic form of heart disease.

“Given our family history, our family knew we had to be vigilant to keep our hearts as strong as possible,” says Agar, who lives in Bloomfield, Conn.

But now thanks to the power of genetic testing at UConn Health’s Pat and Jim Calhoun Cardiology Center, Agar and her family can determine which family members may be at risk.

Through a routine blood sample, Agar’s gene sequences were analyzed by Dr. Travis Hinson, a cardiovascular physician-scientist who is a new faculty member with a joint appointment at UConn Health and The Jackson Laboratory for Genomic Medicine.

Hinson’s advanced genetic analysis revealed that Agar carries a gene mutation that causes dilated cardiomyopathy, a disease of the heart muscle that potentially leads to an enlarged, weakened heart and ultimately heart failure. He identified that Agar carries a mutation in the largest gene in the body called titin (TTN) that leads to dilated cardiomyopathy in about 1 in 5 patients with a positive family history. In 2015, his laboratory published these findings in the journal Science, where he studied miniature beating human heart tissues engineered from stem cells from patients with conditions similar to Agar’s.

Hinson says knowing their genetic predisposition allows patients and families to understand why heart disease may continue to be prevalent generation after generation in their family.

“Now our family can better safeguard ourselves and younger generations at an early age to take extra precautions when it comes to our heart health,” she says. “Because of the way this myopathy develops in our family, we have learned that it is very important when we seek medical care that the physicians we see are aware of this family history.”

Another positive aspect of the testing is that family members who are found not to have the gene no longer need to worry about passing the gene on to their children.

With appropriate treatment, cardiac problems don’t necessarily have to significantly impact your quality of life.

Agar has received comprehensive treatment from a team of physicians at UConn Health’s Calhoun Cardiology Center, including cardiologist Dr. Jason Ryan and electrophysiologist Dr. Christopher Pickett. Since she was first diagnosed with cardiomyopathy in 2009, she has been treated for its complications. These include atrial fibrillation, the most common form of arrhythmia, and ventricular tachycardia, life-threatening and chaotic heart beats that can cause premature or sudden death. To protect her heart against dangerous arrhythmias, Agar takes daily medication; has received cardioversions (which convert an arrhythmia to a normal rhythm) and an ablation procedure (the destruction of tiny parts of heart tissue with radio frequency waves that are triggering arrhythmia); and has an implantable cardio-defibrillator.

As a result of the personalized team approach among the cardiologists who care for her at the Calhoun Cardiology Center, Agar’s heart function has been nearly normalized. She is grateful to the entire team.

“I’ve been fortunate,” she says. “UConn’s cardiac health team and their staff have been very supportive. They are truly experts in their field and treat me in a very professional and personal manner. They welcome questions and listen to my concerns. They convey the feeling that they truly care about my well-being.”

Cardiomyopathy is the most common cause of heart failure. While it can be a genetic condition, it can also be caused by a heart attack or unhealthy lifestyle.

Agar advises others who may have a recurring theme of heart trouble in their family to seek care and not ignore it. “With appropriate treatment,” she says, “cardiac problems don’t necessarily have to significantly impact your quality of life. Remember that you are in charge of your own health. Pay attention to the advice of your health care professionals and do those things that are necessary for good health.”

Precision Medicine for Your PracticeHow can genetics be used in clinic with my patients? Can genetic information really improve outcomes? Genetic testing is constantly changing. How can I keep up?