A niche new way to stay a stem cell

All quiescent on the fresh native myofiber, but…

Stem cells typically lose the capacity to differentiate when cultured in vitro. Their potency appears to depend on preserving the quiescent state, which has been difficult to accomplish with traditional culture methods. In the body, stem cells reside in specialized microenvironments, or niches, with unique chemical and physical properties. Quiescent stem cells isolated from their native environment and then plated become activated to divide and differentiate. A Stanford University research group led by Dr. Thomas A. Rando sought to create an enhanced culture system for studying the biology of quiescence. Their strategy involved modeling physical components of the niche within a three-dimensional scaffold of engineered artificial fibers and developing a defined medium to go with it. Their study, published last month (May 2016)  in Nature Biotechnology, describes a significantly-improved system for sustaining stem cell quiescence in vitro that not only may facilitate advances in stem cell therapies for muscle disorders, but also inform efforts to maintain quiescence in stem cells isolated from other tissues (Quarta, et al., 2016).

Optimizing media and physical characteristics of an artificial microscaffold

The Rando group used microfluidic chips to perform combinatorial quantitative (Q)-RT-PCR array analysis of RNA isolated from either single, freshly isolated, quiescent muscle stem cells (MuSCs) or MuSCs that had been induced to proliferate in vivo by an intramuscular injection of a cardiotoxin.  Principal component analysis revealed unique transcriptional signatures for the two cell populations, and the genes enriched in the quiescent cells were identified.  Next, they used another (Q)-RT-PCR array analysis to screen for molecules selected from the literature that when added to MuSC culture media promoted expression of the genes in quiescent cell transcriptional signature. Combinations were tested until the transcriptional signature could be maintained for at least two days in culture, thus defining a “quiescence medium.”

MuSCs associate with native muscle fibers in vivo, and the Rando team found that culturing the cells on native fibers in vitro preserved their quiescence better.   From this observation, the team hypothesized that growing MuSCs on a physically similar, artificial scaffold made from extracellular matrix proteins found in the endogenous muscle niche might prolong the quiescent state in vitro. They tested substrates with different elasticities based on the physiological ranges reported in native muscle and found that the stem cells tended to remain quiescent in matrices with the greatest elasticity.

The researchers then tested substrates that varied in stiffness and that were made from the extracellular matrix protein collagen I, which has adjustable mechanical properties. They found that there was likely an optimal substrate elasticity above which the stem cells would activate and differentiate and below which they would undergo apoptosis. They used this data to design a microfluidic chip on to which artificial fibers of extruded collagen I were deposited and molded to have a shape and geometry similar to native fibers (See Figure below, panel A).  The collagen fibers were then coated with recombinant integrin α4β1 and recombinant laminin, which the Rando team had identified as key muscle fiber membrane proteins that interact with MuSCs. Mouse MuSCs grown on the “functionalized” engineered fibers maintained reversible quiescence in vitro with activation kinetics similar to freshly isolated MuSCs plated in the quiescence medium.

Having optimized their stem cell culture system, the Stanford researchers next compared engraftment of freshly isolated stem cells in association with a native myofiber to stem cells cultured in quiescence medium with or without the engineered fibers. Pax7tm1(cre/Esr1*)Cklr mice were crossed to Gt(ROSA)26Sortm1.1(CMV-luc,-ALPP)Cklr mice, both pro­vided by Charles Keller at Oregon Health and Science University, to create mice with luciferase-tagged MuSCs (Pax7 cre-luc mice). Stem cells isolated from Pax7 cre-luc mice, either fresh or grown under the two culture conditions, were transplanted into cardiotoxin-injured tibialis anterior (TA) muscles of immune-deficient, C57BL/6-nude (B6.Cg-Foxn1nu/J (Stock# 000819) mice, and engraftment was followed using non-invasive luciferase imaging , as shown in Panel B of the Figure below. Muscle stems cells associated with the engineered fibers showed proliferation and differentiation potency comparable to the fresh stem cells and significantly enhanced over the cells grown in the absence of a fiber (See Figure, Panel C). 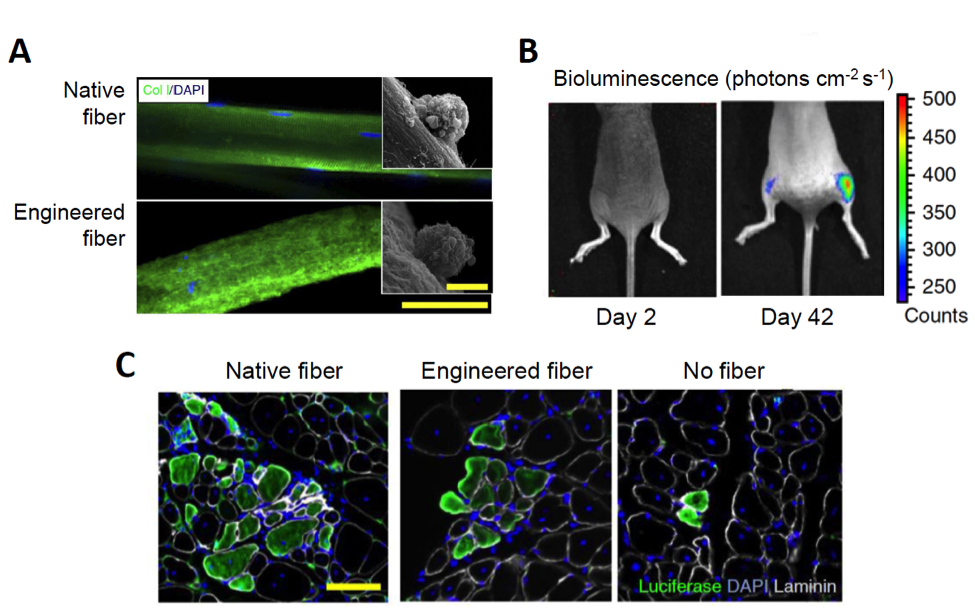 Figure. Growing MuSCs on artificial muscle fibers in vitro enhances differentiation potency in vivo.  A. Immunostaining of a murine myofiber (top) and an engineered myofiber produced from monomers of collagen I (bottom). Scale bar, 50 μm. Inset images show scanning electron microscopy of MuSCs growing on the respective fibers. Scale bar, 5 μm. B.  A time-course of bioluminescence of mouse hosts that had received 50 luciferase-labelled MuSCs transplanted in each tibialis anterior muscle. The left leg (left side of image) received MuSCs not cultured with a fiber; the right leg received MuSCs grown on the artificial fiber. C. Luciferase expression in tibialis anterior muscles 40 days after transplantation as shown by fluorescence immunohistochemistry. Scale bar, 100 μm. (Adapted from Quarta et al., 2016).

Self-renewal potential was assessed by re-injuring the engrafted muscle 40 days after the initial transplantation in order to induce re-activation and proliferation of the transplanted cells. Both muscle that had been engrafted with fresh stem cells that had been grown in association with the native fiber and cells grown in the artificial niche demonstrated increased bioluminescence after the second injury, while muscles engrafted with the cells grown without a native or engineered fiber showed almost no increase. The same experiment was repeated using stem cells isolated from B6.129X1-Gt(ROSA)26Sortm1(EYFP)Cos/J (Stock# 006148) mice crossed to the Pax7 cre line, to label the donor MuSCs with yellow fluorescent protein (YFP). In this experiment, MuSCs were isolated ten days after the second injury and were quantified by FACs. Only muscles transplanted with stems cells grown in culture with native or engineered fibers showed the presence of donor-derived MuSCs; no donor cells were found in muscles that had been engrafted with stem cells grown in niche-absent cultures.

Lastly, the Rando group carried out experiments with human MuSCs isolated by FACS from surgical samples and cultured in the quiescence medium either with or without an engineered fiber that had been modified to incorporate human extracellular matrix proteins. They showed that freshly isolated human MuSCs also retained reversible quiescence when grown in the artificial niche for up to 3.5 days. They then replicated the mouse transplant experiments by first virally introducing a luciferase gene into the human stem cells that had been maintained in either the optimized or standard culture conditions and then transplanting them one day later into injured TA muscles of immunodeficient mice. Thirty days later, the engrafted human stem cells grown in the artificial niche produced a luciferase signal an order of magnitude higher than the cells grown under traditional culture conditions.

Stem cell quiescence has been difficult to study with traditional culture methods. The Rando group has defined a biomimetic culture system that significantly improves engraftment and self-renewal potential of both mouse and human muscle stem cells. The system may accelerate efforts to develop stem cell therapies for muscle disorders, such as genetic dystrophies and myopathies, as well as muscle loss that can occur with traumatic injury. Moreover, the approach that the Stanford team took to optimize their muscle stem cell culture matrix and media also may work for stem cells derived from other tissues.  If so, these methods could enhance efforts to develop stem cell therapies for a wide variety of disorders, including stroke, central nervous system degenerative diseases, genetic erythrocyte or leukocyte disorders, and even some cancers.

In a paper published in the Proceedings of the National Academy of Sciences, researchers show that JAX Mighty Mice stayed relatively mighty during their time…

A Jackson Laboratory mission to study muscle and bone loss on the International Space Station also launches a STEM project for students here on Earth.