Coordinated, proper hair cell orientation is vital for both hearing and motion detection, because each cell only detects motion in one direction. Researchers have observed that motion detection within the inner ear and in the lateral lines on fish is dependent on different subsets of hair cells being “flipped” 180 degrees. That is, one subset is oriented one way and another faces the opposite direction in a mirror-image arrangement. But how is that achieved? 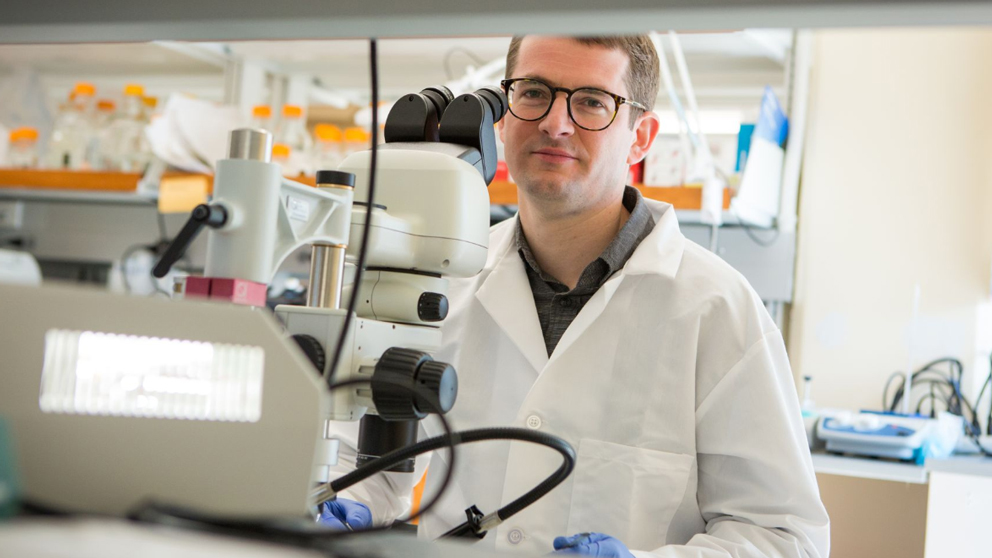 Most of us take hearing for granted, but the  Tuning in to the inner earBasile Tarchini, Ph.D., is working to understand the basic mechanisms underlying hair cell development, with the goal of restoring hearing following injury.mechanics of how we hear are quite extraordinary. Sound waves in the air become fluid waves inside our ears that are sensed by hair cells that fire electrical impulses along nerves to our brain, which then interprets them. Did the waves come from a barking dog, a familiar song, screeching car brakes? Detecting the differences can be important.

Jackson Laboratory (JAX) Associate Professor Basile Tarchini, Ph.D.Investigating inner ear development, focusing on the role of cytoskeleton polarization in sensory function and hearing loss, with a goal to inform therapies for sensory cell regeneration.Basile Tarchini, Ph.D., studies how hair cells in the ear are precisely arranged and spatially oriented to detect nuanced differences in sound waves. His previous research has shown, at the molecular level, how the specialized structures on the hair cells that detect motions, known as stereocilia, develop into stepwise formations in the exact orientation needed for hearing. Now, in “EMX2-GPR156-Gai reverses hair cell orientation in mechanosensory epithelia,” published in Nature Communications, he and his research team reveal a new mechanism that determines how a sub-population of hair cells can reverse their orientations at the organ level.

Coordinated, proper hair cell orientation is vital, because each cell only detects motion in one direction. In addition to the exacting organization in the auditory epithelium needed for hearing, researchers have observed that motion detection within the otolith organs in the inner ear is dependent on different subsets of hair cells being “flipped” 180 degrees. That is, one subset is oriented one way and another faces the opposite direction in a mirror-image arrangement, a configuration also present in the lateral lines on fish where hair cells detect water movements. But how is that achieved?

Tarchini and his team began their investigation with the family of guanine nucleotide-binding proteins of the inhibitory alpha class (collectively Gai) previously shown to play a role in proper stereocilia development. Gai is also needed to regulate hair cell orientation, but the mechanism had remained unknown. The researchers theorized that Gai may function downstream of a particular kind of cell membrane receptor—G protein coupled receptor (GPCR)—but had to determine which one.  The Tarchini LabInvestigates the molecular mechanisms shaping hair cell architecture in the inner earThe Tarchini lab discovered that mice lacking GPR156, a GPCR with no previously known function, lack the necessary mirror-image arrangement of hair cells in the inner ear, indicating that GPR156 plays a central role in reversing one population.

“GPR156 is an ‘orphan’ receptor—we don’t know what binds to it,” says Tarchini. “GPCRs are of high interest because they are the targets of many drugs used in medicine. In fact, a drug company in the early 2000s thought GPR156 might be a receptor for the neurotransmitter GABA, because it’s similar to known GABA receptors, but their study didn’t show a response to GABA, and GPR156 actual function remained unknown. Our paper identifies an important, novel role for this receptor in cell polarity.”

The study shows that there are three components necessary for hair cell reversal and multi-directional sensing: the transcription factor EMX2, GPR156 and Gai. Mice and fish lacking any of the three have hair cells that are uniformly oriented, providing motion detection in only one direction. When Emx2 is expressed in hair cells, it initiates a complex cascade in which GPR156 becomes spatially restricted (or, “polarized”) in the hair cells. GPR156 then activates Gai to rotate the cell 180 degrees. What is remarkable is that the process appears to be the same in both mouse ears and fish lateral lines.

“Surprisingly, auditory hair cells also apparently undergo a flip despite the fact that they normally don’t show a mirror-image organization,” says Tarchini, “so we’ve found what appears to be a hard-wired, highly conserved cellular pathway to reverse cell orientation that applies to multiple organs and animals. Moving forward we will use mouse mutants lacking GPR156, which have balance defects in addition to hearing deficits, to understand how mirror-image hair cell organization specifically contributes to vestibular—inner ear—function, the ability to detect head movements and gravity.”