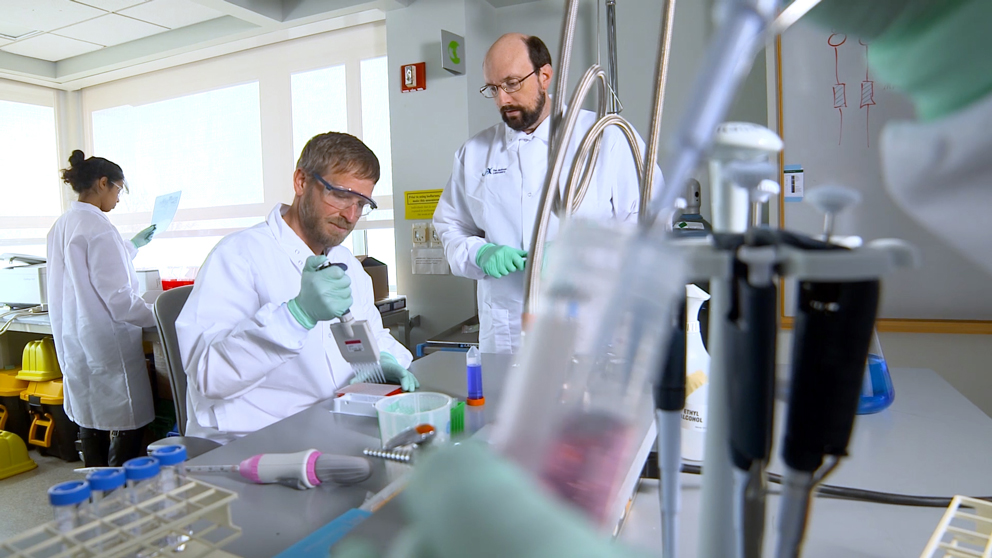 Some of the basic processes of life—DNA replication, gene transcription to messenger RNA (mRNA), protein synthesis at ribosomes—are essential for proper biological function, but they can be surprisingly error prone. In turn, organisms have evolved intricate, highly effective error-correction systems to fix problems as they arise. Indeed, these biological quality control systems are so important that defects in their performance can lead to dysfunction and disease.

It’s long been recognized that neurons, including those in the brain and the motor neurons that innervate our muscles, are highly sensitive to protein dysfunction and accumulation. Perhaps the best-known examples are the beta-amyloid plaques and tau tangles associated with Alzheimer’s disease, but defective protein quality control contributes to a wide range of neurodegenerative processes. In a paper published in Nature Communications, a team led by JAX Associate Professor Greg Cox, Ph.D.Studies the genetics of degenerative muscle diseases using mouse models for SMA, ALS, muscular dystrophy and more.Greg Cox, Ph.D., and graduate student Paige Martin presents how defects in a particular pathway, ribosome-associated quality control (RQC), lead to motor neuron degeneration and neuromuscular disease.

Translation of mRNA to protein at ribosomes can stall for multiple reasons, including lesions on mRNAs or the lack of “charged” transfer RNAs needed to supply amino acids to build the protein. Without correction, stalling can cause significant problems.

“When ribosomes stall, they can get stuck and start bumping into each other on the mRNA, like a traffic jam on a freeway,” says Cox. “A lot of energy goes into making ribosomes, and the cell needs them to work and produce proteins. The RQC pathway is therefore a crucial quality control function that has similar systems throughout nature.”

Prior work in yeast by collaborator Claudio Joazeiro, Ph.D., of The Scripps Research Institute and Heidelberg University had identified a protein, LTN1, that prepares incomplete peptides at the ribosome for degradation. The new study, “NEMF mutations that impair ribosome-associated quality control are associated with neuromuscular disease,” investigates a different part of the RQC system, known as NEMF in mammals or Rqc2 in yeast. It was thought that defects in NEMF might also impair LTN1 function, with similar consequences.

The team worked with two mouse models with N-ethyl N-nitrosourea (ENU)-induced mutations in the Nemf gene, as well as mice specifically engineered with CRISPR to lack NEMF protein.

“The ENU mutants were sent to me by JAX colleagues who were looking for different traits but knew I would be interested in neuromuscular defects,” says Cox. “When we found the gene, though, we didn’t know what it did. NEMF was previously known as SDCCAG1—serially defined colon cancer antigen 1—only because it was first found in cancer cells. It was through our collaboration with Claudio that we discovered its role in RQC.”

All three NEMF-mutated mouse strains exhibit relatively low body weight, impairments in motor function, and shortened lifespan. The NEMF-null mice were the most severely affected, with early deviations in growth and very short lifespans. Delving further into the molecular mechanisms involved, the researchers found that the mutations interfere with a process that adds a particular kind of amino acid “tail” to the immature peptide chains

“It’s a bizarre activity,” says Cox. “In yeast the tails are made from alanine and threonine, so they’re called CAT tails. We don’t yet fully understand their biological function in mammals, but it’s thought that the tail pushes the incomplete peptide out of the ribosome to help with degradation. It might also act as a cell distress signal so that protein translation slows down and ribosomes don’t pile up while the problem is being fixed.”

Working with human clinical data in a system called GeneMatcher, Cox and Martin identified nine patients from seven unrelated families around the world with NEMF variants that are likely to be pathogenic. The patients display intellectual disabilities and/or motor neuron disease traits of varying degrees of severity and progression, although symptoms began to manifest at between one and two years of age for all but one of the patients.

Defects in RQC is only one of many dysfunctions that leads to neuromuscular disease. Moving forward, Cox hopes to expand his inquiries and collaborations to assemble the many independent pieces into coherent pathways and common themes that can yield targets for effective therapies.

“We want figure out why motor neurons are so susceptible to degeneration,” he says. “All the cells in our bodies express NEMF, so why are neurons the only ones severely affected by these mutations? We need to connect genes, proteins and function within the cell, as well as the consequences of dysfunction in the whole system.”