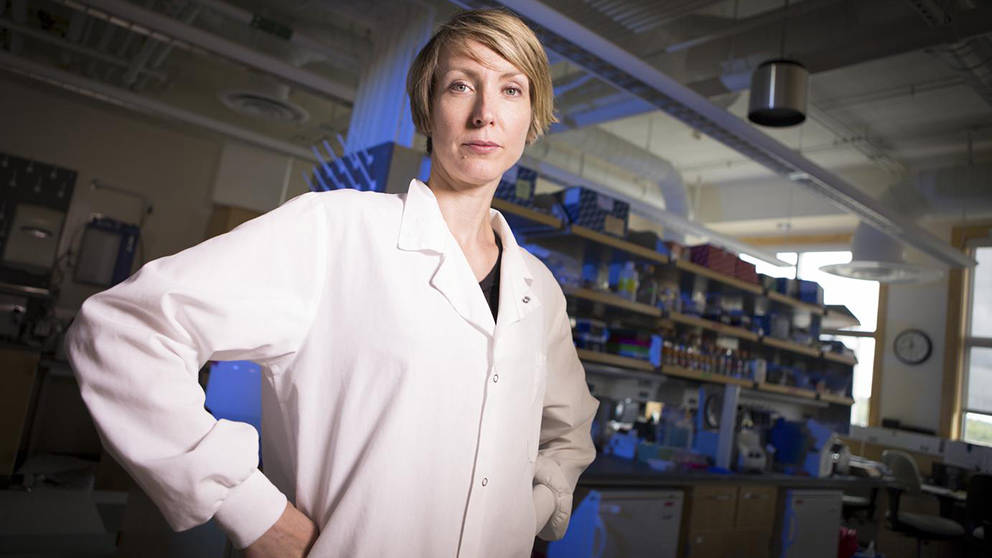 As we age, we grow more likely to develop cancer. Jennifer Trowbridge wants to know why, specifically, older people are more likely to get acute myeloid leukemia (AML).

“The link between cancer susceptibility and aging is very well established,” Trowbridge says. “And in the blood system we grow more susceptible to particular types of blood tumors. We’re looking at changes in the stem cells that are responsible for building blood cells but develop cancer cells instead.”

The average age of onset of AML is 67, with slightly more men than women getting the disease. Chemotherapy is effective in about two-thirds of patients, but older patients don’t respond as well. As with all cancers, the earlier AML is detected, the better the prospective outcome, but today there is no screening test to find AML before symptoms occur, and the symptoms themselves — which include weight loss, fatigue, fever and night sweats — could point to any number of other conditions or diseases.

We’re looking at changes in the stem cells that are responsible for building blood cells but develop cancer cells instead.

The Canadian-born Jackson Laboratory associate professor has figured out a way to profile blood tumor cells that offers a powerful new prognostic tool, and is now exploring strategies for targeting AML before it even starts.

Joining JAX for her first faculty position in 2012, following her postdoc at Dana-Farber Cancer Institute and Children’s Hospital in Boston, Trowbridge has already published research in top journals and has captured the attention of several prominent funding organizations. She has earned a New Scholar Award in Aging from The Lawrence Ellison Foundation, a National Cancer Institute Provocative Questions Initiative award, a Maine Cancer Foundation grant and a newly announced V Scholar award from The V Foundation for Cancer Research.

Trowbridge’s postdoc mentor was Stuart Orkin, M.D., David G. Nathan Distinguished Professor of Pediatrics and Howard Hughes Medical Institute investigator at Harvard Medical School, who is also on the external advisory board of the JAX Cancer Center. “Jen has the uncanny ability to focus on the critical issues and then design her experiments to address them clearly,” Orkin says. “Always upbeat and enthusiastic, Jen has always been a terrifically positive person. These traits make for a strong foundation, and have allowed her to transition to her independence smoothly and rapidly, becoming an important faculty member at JAX.”

Despite all of her precocious success, Trowbridge didn’t start out planning to be a research scientist. Though she enjoyed math and science as a kid, by her senior year at the University of Western Ontario she was on a path to become a genetic counselor. But one lecture on signaling pathways in stem cell biology by a new faculty member sparked a passion for exploring genetic mechanisms.

“The thing I liked about genetic counseling,” Trowbridge says, “was the idea of interacting directly with people, and being able to feel like I was making a difference in their lives. But this professor was addressing genetic diseases directly, and showed me a different path to helping people.”

Fired up to go to graduate school in immunology and stem cell biology, but with only basic genetics and biochemistry courses under her belt, Trowbridge emailed the lecturing professor, Mick Bhatia, to ask whether he would take her on as a grad student. Bhatia declined but Trowbridge persisted, asking one of her professors to “please talk to him and tell him that I’m smart and I have good hands in the lab and I’ll work really hard, and that he should let me be in his lab.”

Bhatia, who is now Canada Research Chair in human stem cell biology at McMaster University, agreed to be Trowbridge’s mentor. “Having had many graduate students before,” Bhatia says, “I suggested directions where techniques and preliminary data were available, so she could continue on a pre-developed track. This, however, was not a regular graduate student.

“A few months after her arrival, Jen would walk into my office and sit on the carpeted floor, where she insisted she was more comfortable. There would start discussions about the conceptual framework of experimentation, how controls for the variables could be designed and what interpretations from the experiments (that I later learned she was already doing) could be drawn out. These starting discussions were clearly the end of my contributions as a supervisor, and I quickly realized I had a stem cell biologist peer.”

Bhatia adds, “It’s a delight to watch her achieve her goals, although I too often look at my empty carpet floor and miss Dr. Trowbridge.”

Trowbridge would, in fact, have made a first-rate genetic counselor. She has a serene, calm demeanor and listens thoughtfully, ignoring the frequent “pink” sounds of incoming emails on her computer. The people in her lab describe her as caring and supportive. She’s also a family woman who — with her husband Mike Kiers, a nurse at the local hospital and, like Trowbridge, tall and athletic — has two young sons and is expecting a daughter in the spring. 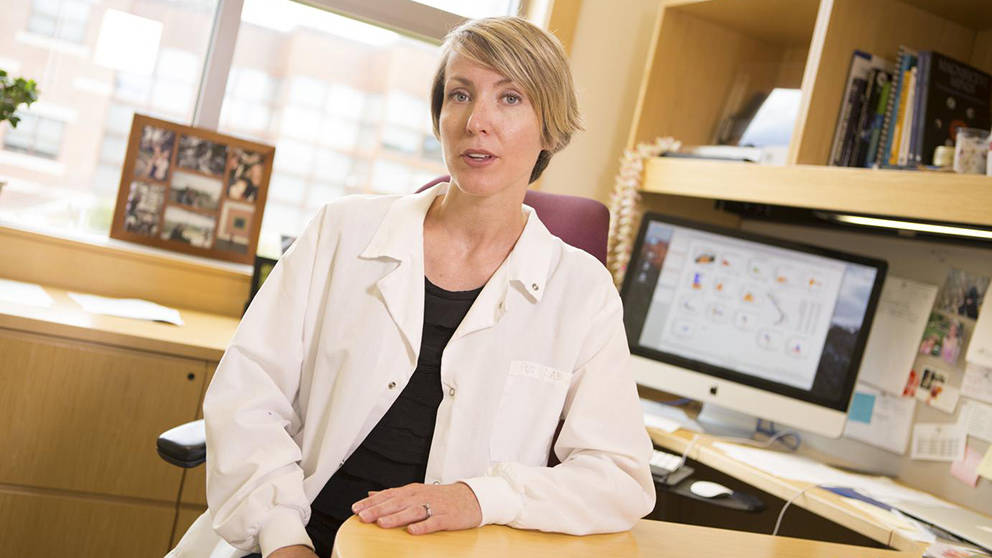 Like most principal investigators, Trowbridge has to spend most of her time at her computer, writing grant proposals and drafting research papers. This morning she has carved out time in her lab to meet with her small staff for a progress check on the quest to understand what goes wrong in AML.

All blood cells start from a common origin, hematopoietic stem cells (HSCs). HSCs in turn produce more specific progenitor cell types, each of which are responsible for producing various kinds of blood cells: red, white (including myeloid cells) and platelets.

Over the years, the stem cell compartment in the bone marrow expands, but that’s not good news: Some of the stem cells it cranks out don’t function properly and instead produce more of the myeloid cell types, which increases the chance of these cells becoming cancerous.

This approach is kind of another dimension. It's an incredibly precise tool for looking at the big picture of a cancer.

Data from AML patients show that the stage of a progenitor cell when it becomes transformed to leukemia has an impact on its clinical progression, with earlier-stage cell of origin cancers being more aggressive. But how can you triage the different kinds of cells to determine the cells of origin?

In what could be described as a conceptual discovery, Trowbridge found a framework to sort out and evaluate tumor cells: their open chromatin profiles.

Chromatin is the material in the cell’s nucleus that condenses to form chromosomes during cell division. Just as every species of tree produces leaves of a certain shape, every type of cell has a characteristic chromatin profile: a distinctive combination of closed (tightly wound and relatively inactive) and open (looser and more active) chromatin.

“We realized we could analyze open chromatin in bulk tumor cells,” Trowbridge says, “to determine what kind of cell the tumor had developed from. That cell-type specificity of chromatin structure provides a major clue for diagnosis and treatment.”

Working with a mouse model of AML, the Trowbridge lab began with five distinct, normal cell types found in bone marrow: long-term HSCs, short-term HSCs, multipotent progenitors, common myeloid progenitors and granulocyte macrophage progenitors. The AML that developed from these different cells of origin had varying levels of aggressiveness when engrafted in mice, with the stem cell-derived lines being the most aggressive.

To profile the open chromatin in these distinct AML samples, and compare them to open chromatin patterns in normal cells, Trowbridge collaborated with Duygu Ucar, Ph.D., a JAX assistant professor who develops computational models to study gene regulation including chromatin structure. Together they identified open chromatin signatures and gene expression patterns in AML samples that enabled them to distinguish the more aggressive, stem-cell-derived AML.

“This approach is kind of another dimension,” Trowbridge says. “It's an incredibly precise tool for looking at the big picture of a cancer. It reveals what's happening in terms of how the cancer cells are behaving, where they've come from, what they've been exposed to and, potentially, what's going to be effective to treat them.”

Ucar describes Trowbridge as “a dream collaborator” for a computational scientist. “It’s a great pleasure to work with her. She generates top-quality data and asks very smart research questions.”

Back in her office, Trowbridge reflects on the struggles inherent in being a principal investigator in today’s complex research environment, which she describes as finding a balance between positivity and realism.

“I’ve learned that it's okay to have to lean on somebody else, to ask somebody for help, to collaborate with somebody because you can't get this particular technique to work and they're an expert in it. Working with Duygu is a perfect example of this.”

By the same token, she says, “The hardest lesson that I have had to learn is to know when to cut a project, because it's not going as well as you had hoped and you're just sinking a lot of resources and time into it. Ultimately it does better justice to the process and to science to be able to make those difficult decisions.”

Exploring the science of agingJAX computational scientist Duygu Ucar bridges the worlds of biology and computer science to unlock the secrets of aging and age-related disease.