Genomics researcher Brent Graveley is a 'CONNduit' to JAX 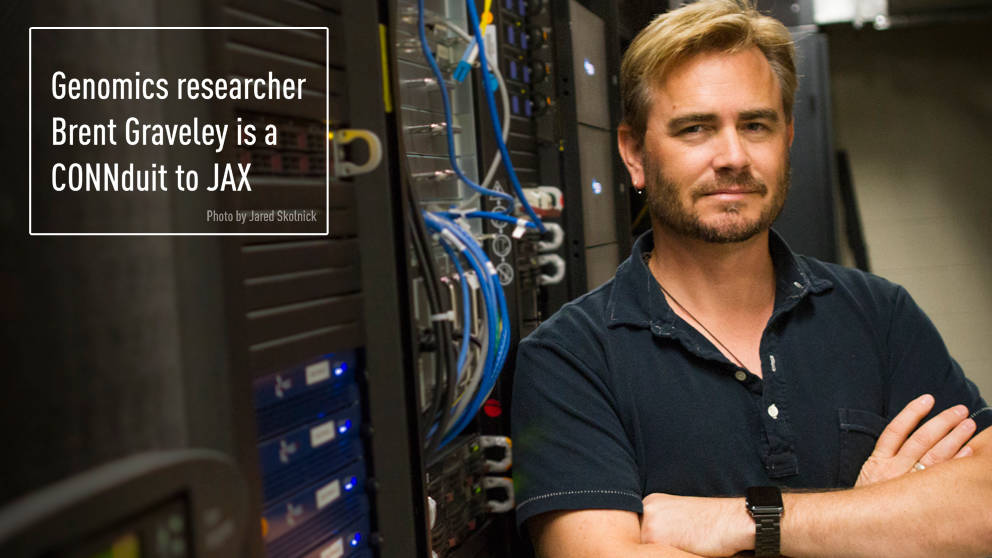 Brent Graveley, Ph.D., has been a professor at UConn Health for 17 years, but you wouldn’t know it by his looks or demeanor. He has a congenial air and laid-back personality that belies his amazing contributions to the field of genomics; he’s the kind of guy you’d want to get a beer with after work, not a starched-shirt lecturer. And it is that laid-back attitude that contributes to his ability collaborate with so many faculty of The Jackson Laboratory (JAX) and others across the globe.

Before JAX arrived (in Connecticut) I was really the only person on the Farmington campus doing genomics.

Finding a suitable collaborator isn’t always easy, but Graveley is taking full advantage of the partnership between JAX and UConn to answer complex questions in genomics.

“Before JAX arrived I was really the only person on the Farmington campus doing genomics. So when JAX got here, it was like having collaborators dropped into my lap, all doing work similar to my own.”

Prior to 2015, The Jackson Laboratory for Genomic Medicine shared space alongside Graveley in the UConn Cell and Genome Sciences building, and he quickly got to work on collaborative projects with Yijun Ruan, Ph.D. and Jeff Chuang, Ph.D., two of the first faculty to join JAX (you can read more about the Chuang-Graveley project here). Using Ruan’s recently refined ChIA-PET technique, they worked on identifying the three dimensional (3D) organization of DNA in the nucleus of Drosophila (fruit fly) cells.

Drosophila is one of the model systems used in the Graveley lab to study genomics, although they also study RNA regulation in humans (in collaboration with JAX faculty Jeff Chuang, Ed Liu and others) and in bacteria. The goal of one project is uncover why a particular Drosophila gene, called Dscam, is spliced into 38,000 isoforms and the functions of all those isoforms. For scale, the Drosophila genome only has about 15,000 genes total, so the ability to make 38,000 different transcripts from a single gene significantly increases the amount of information embedded in the Drosophila genome.

The Dscam gene is predominately expressed in neurons. What the gene seems to do—depending on which isoforms are expressed—is to give each neuron a very unique identity from all the other neurons in the Drosophila brain. It also informs how the neurons connect to each other, but the mechanisms that define individuality and connectivity are not well understood.

To figure this out, Graveley is teaming up with Paul Robson, Ph.D., director of the Center for Single Cell Genomics (a joint venture between JAX and UConn). Using Robson’s Drop-seq system for single cell RNA sequencing, Graveley hopes to find out how many Dscam isoforms are expressed in a single neuron at a given time and how this contributes to neuronal individuality in the fly brain. Importantly, this work has potential implications for human health. Dscam stands for Down Syndrome Cell Adhesion Molecule so named because overexpression of the protein in fetal brain contributes to Down syndrome. Therefore, insight into how Dscam directs the wiring in the fly brain may contribute to our understanding of the wiring in the human brain.

When asked what makes him so successful in collaborating with JAX faculty, he answered, “I’m naturally curious about many different types of science. I like working with other people and I’m pretty easy going. I’m more interested in getting the science done and finding the answers, than getting the most possible credit and advancing my own career.” 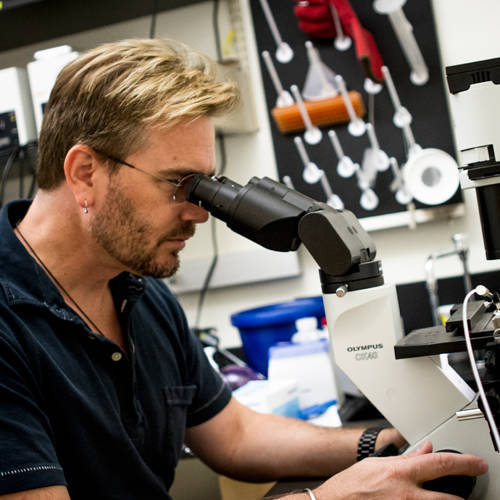 Graveley has also had a hand in shaping the recruitment of new faculty to JAX. He co-chairs a faculty committee that oversees joint hires, and has spent many hours interviewing and recruiting JAX-UConn joint faculty, hoping to find new colleagues. The new recruit he is most excited about potentially working with is Olga Anczuków-Camarda, Ph.D., who recently joined JAX as an assistant professor.

“She works on alternative splicing in cancer and I’ve been aware of her work for several years," Graveley says. "More than possibly any other faculty at JAX, our work is very complementary and would be an easy fit for collaboration.”

When asked what makes for good collaborative science, he said, “What works best is when you have complementary and slightly overlapping expertise so you can speak the same language in some respects, but then build off each others expertise in new and exciting ways.”

A good example of this in practice is Graveley’s collaboration with Zhengqing Ouyang, Ph.D., assistant professor at JAX. Ouyang is an expert in mathematical modeling of RNA secondary structure. The goal of their project together is to understand how human genomic variation contributes to changes in RNA structure, and how these changes affect how proteins bind to the RNA. Ouyang will develop computational models to predict RNA structures from sequenced human RNA, and Graveley will then validate those models in his own lab using molecular biology techniques. Graveley’s findings in the lab can then inform more precise computer modeling strategies by Ouyang, and back and forth until unified theories emerge.

“You each offer up some expertise to the question you are trying to answer and you net something bigger than the sum of your individual contributions.”