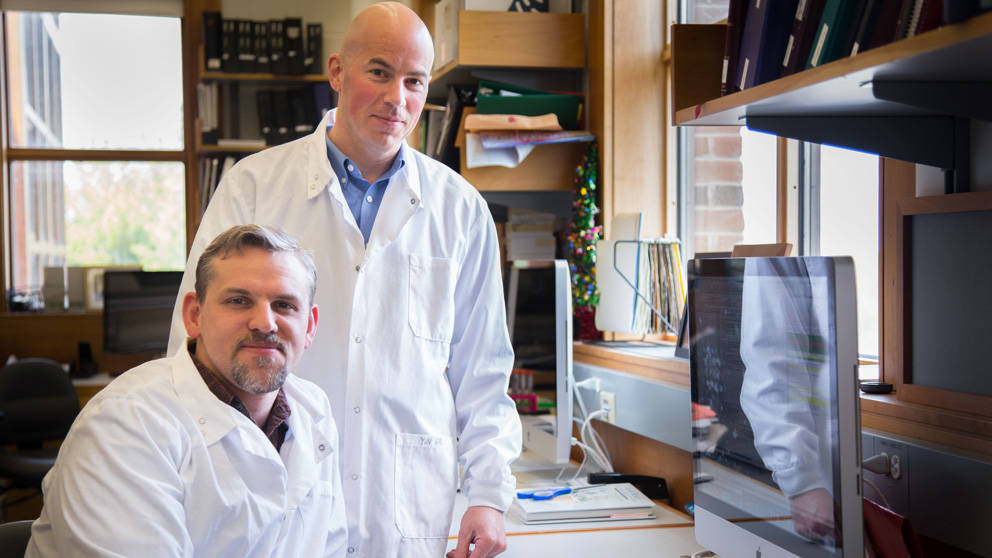 It’s not rocket science — George Sutphin’s exploration of the processes underlying how and why we age is far more complicated.

George Sutphin, Ph.D., matriculated at the University of Washington to study engineering. Aerospace engineering to be exact, a solid choice in the Seattle, Wash., area, longtime home of the aerospace behemoth Boeing. But as he studied high-temperature plasma dynamics and vortex tubes for onboard liquid oxygen collection during space launch, a thought planted by his father grew ever more persistent.

While his father was not a scientist, he had a strong interest in biomedical research. He was particularly intrigued by aging research and the reports of the time about how growth hormone therapy might lengthen life span. In fact, as Sutphin was growing up, his father suggested he study genetics because of its power and potential to affect people’s lives.

“I entered the graduate program in aerospace engineering at Washington, but I kept finding myself drawn to aging research,” says Sutphin, now a postdoctoral associate at The Jackson Laboratory (JAX). “I got really interested, to the point that sometimes I was spending more time reading up on aging than on engineering. Something clicked, and I decided to change course.”

It was a significant change, but Sutphin has never looked back. Fortunately for him, the University of Washington had an aging research program that was at least the equal of its aerospace engineering offerings. It had been selected as a Nathan Shock Center of Excellence in the Basic Biology of Aging by the National Institute on Aging, one of only five Shock Centers in the country at the time. Sutphin just happened to be in one of the best places in the world to make the leap.

After his transition, Sutphin did his predoctoral research in the lab of Matt Kaeberlein, Ph.D., who studies aging in a range of organisms, from yeast and worms to our closer relatives, mice and dogs. The idea, explains Sutphin, is to find processes that affect aging across the evolutionary spectrum, all the way up to humans.

“C. elegans (a species of small roundworm often used in research) usually lives about three weeks, but changes as simple as raising or lowering the temperature can bring that down to two weeks or up to a month,” says Sutphin. “With mice living three years, preliminary work can be carried out much more rapidly and inexpensively in the worms.”

The effect of temperature is actually being further investigated—what genetic pathways associated with life span are affected and why?—but as Sutphin began to wrap up his graduate work, he thought about ways to take his work a step closer to humans. As it happened, Kaeberlein had been talking with JAX Professor Gary Churchill, Ph.D., about work at JAX’s own Shock Center and suggested that Sutphin investigate postdoc options there. Churchill introduced him to fellow Shock Center director and JAX Assistant Professor Ron Korstanje, Ph.D., and Sutphin knew he’d found the place for his postdoc.

“I wanted to do mouse work eventually, and there’s no place better than JAX for that,” he says. “What’s more, while I came to JAX on a regular postdoc grant, the Shock Center had added a JAX Scholar position when the center was renewed. I applied for the position based on my multi-species approach to aging and got it. Things have worked out very well here.”

The JAX Scholar program is a prestigious award for the very best postdocs, so Sutphin’s work had to be of the highest caliber for him to be considered for the designation. And now he and Korstanje are leveraging his expertise with C. elegans in combination with mouse and human data to chase down some of the most intriguing genetic mechanisms associated with life span effects.

One of his current projects began with a paper produced by the CHARGE (Cohorts for Heart and Aging Research in Genomic Epidemiology) Consortium, which combined data from 13 large longitudinal human studies (e.g., the Framingham Heart study) to identify genes with age-associated changes in expression. The tour-de-force analysis found 1,500 candidate genes whose expression changes with age, of which Korstanje and Sutphin chose 125 to study further. Leveraging C. elegans for a relatively quick screen, they knocked down the equivalent genes and found that 30-50% of them had a significant effect on worm life span.

“The next step is to closely investigate the top four or five genes that extend life and health span more than 20%,” says Sutphin. “What are their roles? With what other pathways do they interact? We can do an in-depth characterization in worms, then move to mice, either knocking out the genes entirely or using CRISPR to engineer variants.”

In fact, there are two mouse studies underway and more to follow, promising interesting results for many years ahead. One early area of interest is in the major tryptophan metabolism pathway known as the kynurenine pathway. While tryptophan is most widely recognized (and blamed) for inducing post-Thanksgiving dinner comas, its biological function is of fundamental importance. As an amino acid, typtophan is one of the basic building blocks used to make proteins. Tryptophan processed through the kynurenine pathway meets a different fate, transforming gradually into nicotinamide adenine dinucleotide (NAD), a key player in many aspects of metabolism, or into one of several molecules active in the brain that have been linked to Alzheimer’s and Huntington’s disease in humans. Sutphin and Korstanje have identified three genes in the pathway that can alter life span, but each works through a slightly different mechanism. Fully understanding the effect of the pathway on health span and longevity is an exciting prospect that may yield insight into the basic biology of aging in addition to potential interventions to help lengthen health span in humans.

“We’re just scratching the surface of what’s happening in aging,” says Sutphin, who is perfectly positioned to make the kind of contributions his father envisioned years ago. “It is a rich field for discovery.”