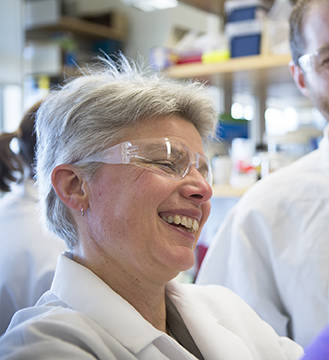 Since joining the JAX faculty in 1999, Bult has been a principal investigator in the Mouse Genome Informatics consortium, building the genetic and genomic databases that the world's scientific community depends on. Bult is deputy director of the Laboratory’s National Cancer Institute-designated Cancer Center, and scientific director of the PDX/Cancer Avatar program, leading the study of human tumors and their response to treatment on the platform of special, immune-deficient mice.

The endowed chair will provide Bult with additional resources and support for her research program as she continues to bridge the digital biology divide by integrating computational biology and informatics with fundamental genetics research.

Knowlton is the retired chairman of Knowlton Brothers, Inc., an investment guidance firm. Over the course of his distinguished career, Knowlton has been a partner of White, Weld & Co; Assistant Secretary of the Treasury for International Affairs; chairman and CEO of Harper & Row Publishers, Inc.; founding director of Harvard's Center for Business and Government; and chairman and CEO of Knowlton Brothers, Inc., a partnership managing hedge funds specializing in publicly traded biotechnology and high-tech companies. He has served on numerous corporate and nonprofit boards and is the author of five books.

Knowlton’s affiliation with JAX, which began in 1960, includes service on the JAX Corporation board and as a member and as chair of the Board of Governing Trustees from 1995 to 1997. In earlier years his father, Hugh Knowlton, had also served as a JAX trustee. His daughter Samantha Knowlton, M.D., served on the Corporation board, and his granddaughter Adeline is a 2011 alumna of the JAX Summer Student Program.

“The Knowlton family has been an important part of JAX history, and we were founded as a cancer research institution,” says JAX Vice President for Development and Communications Kristen Rozansky. “So it’s fitting that the Knowlton Family Chair will support one of our leading cancer researchers. Win Knowlton’s generous endowment affirms the importance of philanthropy in JAX’s history as well as in our promising future.”

Bult is the fourth JAX professor to be named to an endowed faculty position. Gary Churchill, Ph.D., is the Karl Gunnar Johansson Chair; and George Weinstock, Ph.D., is the Evnin Family Chair.

The Jackson Laboratory is an independent, nonprofit biomedical research institution. It employs 1,700 staff, and its mission is to discover precise genomic solutions for disease and empower the global biomedical community in the shared quest to improve human health.