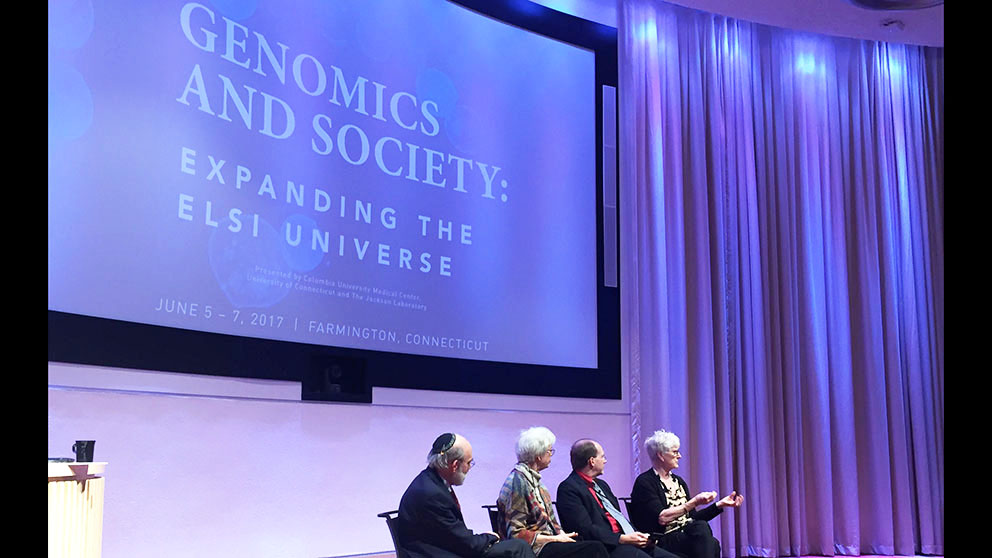 Over the past decade, genomics research has gained so much power, for want of a better word, that its progress has transcended science. We can obtain DNA from an unwashed glass or a fetus still in utero. With accurate human genome sequencing, we can obtain an individual’s full genetic data set, which can be used for both good (disease prediction/prevention) and bad (discrimination, privacy violation). We can edit those genomes, with myriad implications. And all of these capabilities are constantly being improved so we can do them better, cheaper, faster. The potential payoffs are clear, but so are some of the potential risks.

So how can we reconcile the rapid research progress with its ethical, legal and social implications (known by the acronym ELSI) in the larger world? That was the focus of a group of world-leading ELSI experts who gathered at The Jackson Laboratory for Genomic Medicine and the University of Connecticut Health Center in Farmington, Conn., to discuss current and future challenges. It was only the fourth convening of the ELSI Congress since 2002, and with headlines proclaiming the prospect for everything from designer babies to insurance discrimination, the stakes have never been higher.

The Congress revealed a field that is grappling with quickly changing parameters and few clear answers. So what is the ethical landscape at this time? And what are the primary challenges moving forward?

The keynote address and a plenary address immediately following concerned the All of Us program, which has emerged from the Precision Medicine Initiative (PMI) announced by President Obama in early 2015. The PMI launch was a huge moment for the precision (nee personalized) medicine field, as this new medical paradigm, much of it based on genomics, was suddenly thrust into the broad national consciousness. Not surprisingly, it has also served as an ELSI lightning rod and testing ground as it seeks to make real many previously theoretical scenarios.

Of particular note is a key component of the PMI: the development of a 1,000,000-person cohort, recruiting and engaging people willing to donate samples and clinical data to accelerate the implementation of precision medicine. A lot has changed over the past 30 months, in Washington, D.C., and elsewhere, but the cohort project, under the auspices of the All of Us program, received a recent boost — to the tune of $1.4 billion — from the 21st Century Cures Act. It is moving forward with early pilot programs already launched.

And so on. The name “All of Us” indicates a concerted effort to recruit as diverse a participant pool as possible. Genomics cohorts are still largely European, and it’s vital to accumulate data from all ethnicities, as important differences have been observed between them that can affect clinical responses. Many of these questions remain to be answered, and even the very small pilot effort — about 20 participants at one site thus far — has brought difficulties to light that will need to fully resolved before expanding the program 50,000-fold.

A significant issue associated with genome sequencing remains secondary findings. That is, sequencing provides a huge amount of data, and often the analysis reveals more than was tested for. So what do you do if a child is sequenced to diagnose a rare disease and an adult-onset disease risk (i.e., a highly pathogenic BRCA1/2 variant) is found? Or someone has either one or two copies of ApoE4, which confers a higher risk of Alzheimer’s disease, about which nothing can currently be done? Or a variant that previously had uncertain significance is later classified differently after more research? There have now been quite of few studies on these issues, and the definitive answer is... it depends.

There are some people who want to know pretty much everything about themselves, considering knowledge desirable even if it may come with bad news or future uncertainty. Some people want most of their data, but if there’s something bad about which nothing can be done — ApoE4, for example — they’d prefer to remain blissfully unaware. Others just want results related to a particular diagnostic — presumably in cases where that’s the targeted goal for the sequencing — and no more. It’s truly a case-by-case scenario, depending a lot on both the individual and the context in which they are being sequenced. It puts a premium on both genetic counseling to make sure people know the issues involved and on making the informed consent process as informational and transparent as possible.

A relevant scenario discussed at the Congress is when secondary findings emerge when sequencing children for rare and/or Mendelian disease diagnostics. For older children, the anecdotal data indicated a wish to know by many. The ability to plan and monitor a potential emerging condition was generally seen as an advantage, somewhat allaying fears of inducing undue anxiety. Of course, for younger children it’s all up to the parents, and it can be a very difficult judgment call. Such a situation brings home the reality that health data can generate ethical quandaries, depending on the context.

Better medicine for all

So far, precision medicine has carried a high price tag. Individualizing therapies can improve patient outcomes, but it comes at a cost. Also, its delivery has been largely confined to major academic medical centers so far, not the community medical facilities that provide care for roughly 80% of all U.S. patients. So how can we work to make better medicine available for all, not just a select few?

The question is particularly poignant at a time when federal healthcare policy is being hotly debated. The volatility of the situation also makes it difficult to come up with clear answers. It does seem likely that increasing patient financial burden will slow the progress of precision medicine, however, as delivery of even established and simple therapies will become more difficult. Regardless, it will be important to follow the progress of All of Us, which will provide a good test case for identifying specific barriers to access and, one hopes, begin to address them.

The promise and potential of genomics research and precision medicine is vast, but there are also many possible ethical pitfalls along the way. Identifying them, discussing and rigorously studying possible harms, and integrating the insight gained is vital. It may be that the ELSI field will always be working hard to stay current with the advancements in science and technology, but the implications of progress carry risks as well as rewards. As the Congress demonstrated, clarity can be elusive even after thoughtful study and discussion by experts, but in time and with continued effort, we stand to gain substantially from better healthcare delivered within a safe and ethical framework.

What causes stiffness factor in induced pluripotent stem cells and what are the functional implications of cell stiffness?

Five must-reads if you study aging in mice

A call to action: Women in the biosciences

It’s a never-ending struggle to get all of your mice to do the same thing at the same time. What can you do…