A call to action: women in the biosciences

As a woman in the biosciences, I am always interested in hearing about the experiences, successes and failures women face as they advance in their careers.

Last week I was fortunate to attend the Bioscience Career Forum at The Jackson Laboratory for Genomic Medicine in Farmington, Conn., entitled “Women in Bioscience.”

The highlight for me was Ellen Matloff’s address. She managed to strikingly convey women’s frustrations at the scientific establishment’s treatment of women, yet also provide tangible ways we can act to invoke change. 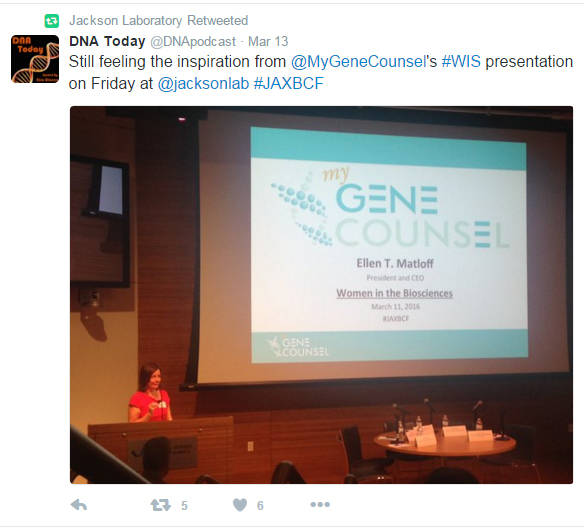 As President and CEO of her own company, My Gene Counsel, and founder and former director of the Cancer Genetic Counseling Program at Yale School of Medicine, she has her own personal experiences and a dedicated interest in promoting women in science.

The past year has sparked both curiosity and outrage on this topic. The conversation gained momentum following Nobel Lauerate Tim Hunt’s controversial comments at the World Conference of Science Journalists in Seoul, South Korea last summer. Hunt said about the troubles of having women in the lab:

Hunt’s comments led to an explosion of Twitter posts from female scientists with the hashtag #distractinglysexy. Matloff hit on Hunt’s comments as well, and asked, “What messages are we sending to many girls and boys about careers in the biosciences?”

This raises a valid point: If we want to improve the representation of women and minorities in the sciences, we must include men in the conversation as well.

There are actions we can take to support women and promote their careers in science, and Matloff suggested multiple modes of action for teachers, employers, and students interested in science.

First of all, and I personally think this point is crucial, we must limit gender biased messaging. Stop enforcing stereotypical roles at young ages, and encourage curiosity and foster intellectual development in boys and girls. She described a situation at her daughters’ school in which the girls were provided a “father-daughter dance” event, while the boys were offered a “night at the science museum.”

The message implied by the distinction between these two events could not be more obvious.

Matloff also stressed that we must “elect leaders who value equality and demonstrate respect for women, ethnic, and religious minorities.” For employers, it is important to offer equal opportunities to men and women, not only on the pay scale, but also in terms of travel, promotions, and leadership positions.

Matloff focused on the importance of mentors, male and female, in encouraging and supporting women in the biosciences. She emphasized that women must be willing to reach out to potential mentors, and not  “limit yourself by gender, geography, or fear.”

Her mentors when she was establishing the Cancer Genetic Counseling Program at Yale were men, and she accurately noted that, “Men are essential to supporting women in the biosciences.”

We need to keep this conversation going for the good of the scientific community.

I can attest to this statement as well, as my Principal Investigator during graduate school, Klaus Kaestner, Ph.D., has been a great help in navigating my career in biological research. Although men can be excellent career mentors, it is also essential for women to have female mentors from whom they can learn and ask advice.

Matloff spoke about the importance of finding a female mentor that is the “right fit,” someone that will support and take an interest in guiding your career path.  When Matloff was founding My Gene Counsel, she attempted to find a female peer in Connecticut with experience as a CEO to be her mentor. Two years later, she still hasn’t found one, highlighting the overwhelming need for women in leadership roles in the biosciences.

Matloff asserts that everyone, men and women, “should care about this topic because in order to draw the best people into science, we need women.”

I couldn’t agree more. We need to keep this conversation going for the good of the scientific community.

Inclusion of women and minorities can only improve science, as with more diversity comes more creative ideas and effective solutions. But more importantly, no one should feel discouraged from pursuing a career in the biosciences simply because they don’t fit a pre-determined model.

“Just stay the course and be true to yourself,” says JAX Professor Elissa Chesler, who, as a pre-teenager, had toys like chemistry sets and model rockets that she “absolutely loved to play with.”

Chesler remembers being on the playground one day when a girl told her it wasn’t cool to be playing with model rockets at her age.

“I said, ‘You know what? It’s OK to play with model rockets and telescopes,’” Chesler said. “And I still do today.”