Editor's note: This editorial was originally published June 3, 2016 in the Ellsworth American. 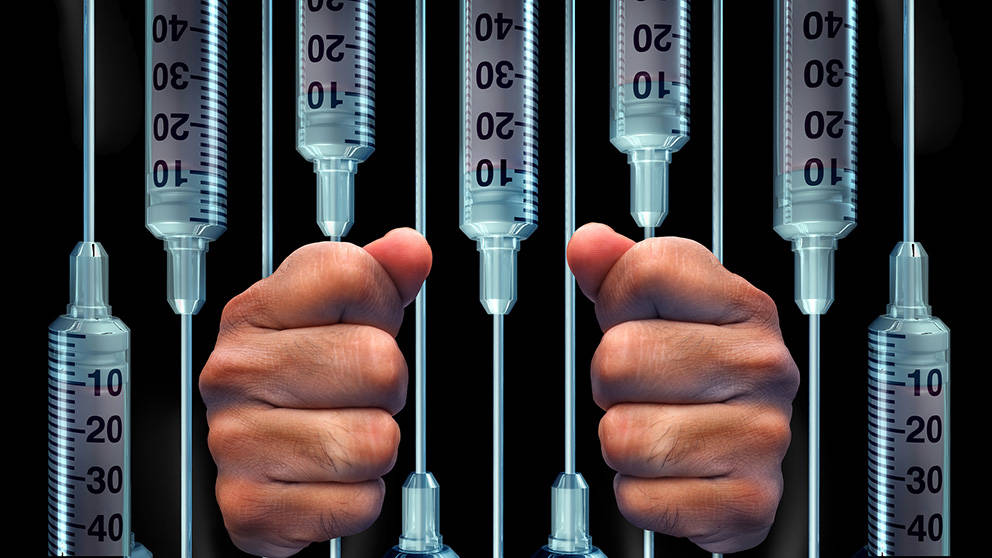 It may seem surprising that an experienced drug user is at a higher risk of overdose than a novice, but statistics show that former opioid users who have recently been released from prison or those who have already detoxed are more likely to overdose than new drug users. In order to understand this phenomenon, we must understand the neuroscience behind opioid action and the various aspects of drug abuse.

Opioids such as heroin, morphine, codeine, hydrocodone (Vicodin), oxycodone (OxyContin, Percocet) act through a distinct family of receptors in the brain, which are aptly called opioid receptors. Whether a prescription medication or an illicit street drug, the mechanisms of action are similar. There are three members of opioid receptors (mu, delta and kappa). These are related, yet distinct binding sites for the opiates, without which the drug could not mediate its effects. Of these three receptors, the mu-opioid receptor is the key receptor for the analgesic (pain-relieving) and rewarding properties of opioids.

Once opiates enter the body, they are circulated in the bloodstream and cross the blood-brain barrier. In the brain, the opiate is quickly metabolized into the active compound, morphine, which can bind the muopioid receptor.

The mu-opioid receptors are found in key regions of the central nervous system that control pain perception, emotional responses, reward and breathing. These receptors also exist in regions outside the central nervous system such as the skin and gut. The activation of opioid receptors leads to a complicated set of molecular events that ultimately change the activity of individual neurons and circuits. The consequence of receptor activation varies depending on the region of the brain in which they are located.

Opioid receptor activation in brain regions that are responsible for pain perception, skin and spinal cord leads to pain relief. This is the reason doctors prescribe opioids. Activation of receptors in the reward regions leads to increases in dopamine release, and is perceived as pleasurable. This pleasurable or rewarding effect is the reason why opioids are abused. Receptor activation in the brain stem slows down breathing and decreases blood pressure. This is the primary reason for overdose deaths.

Physical dependence and tolerance are both due to drug-induced changes in the brain (neuro-adaptations). The brain is adapting to the drug by changing the receptor’s signaling strength through several mechanisms. Physical dependence and tolerance are distinct properties of drug use that occur concurrently and should not be confused as being the same.

Tolerance leads to decrease in drug potency with repeated use. A patient who starts taking opioids for pain management will typically need to increase the dose over time to get the same effect. The same is true for the rewarding properties of opioids; increased levels of the drug must be used in order to get the same high. Typically a chronic opioid user has developed high levels of tolerance. He or she consumes the drug in such high amounts that it would kill an opioid-naïve person. Importantly, chronic opioid users can also develop tolerance to the life-threatening effects such as suppression of breathing.

Physical dependence occurs after chronic opioid use. It manifests itself in the form of readily observed withdrawal symptoms when the drug is not available. For opioids, withdrawal symptoms include nausea diarrhea, vomiting, muscle aches, and can last from days to weeks depending on the type and duration of opioid use.

Both tolerance and physical dependence are temporary, lasting only weeks to months after the drug is withdrawn. Tolerance may be easier to understand in the context of alcohol. Most of us cannot consume the same amount of alcohol as our glory days in college; we have lost tolerance for the drug. The same is true for physical dependence on opioids; once a person is detoxified, the withdrawal symptoms fade. However, a person who is no longer physically dependent can still be addicted.

Addiction occurs in a small percentage of opioid users and can manifest itself long after drug use has stopped, when tolerance is no longer present and physical dependence has subsided. It is thought to have distinct molecular mechanisms leading to long lasting functional changes in the regions of the brain that control reward, emotion and cognition. It has a strong genetic component, and adolescents are at higher risk because of their developing brain. Addiction is a chronic illness that can last a lifetime. Philip Seymour Hoffman was reported to have relapsed to opioid abuse after 23 years of abstinence.

Addicts meet certain criteria in the Diagnostic and Statistical Manual of Mental Disorders (DSM5). These include compulsive drug taking, obsessive thinking about the drug and escalation of drug use. Simply put, addicts take drugs despite negative consequences. Coming back to the original question — why are people who re-initiate opiate use after quitting at higher risk of overdose? It is because they have lost their tolerance for the drug but are still addicts. Addicts will relapse (re-initiate drug use); this is one of the characteristics of addiction. But if the person consumes the same dose of the drug as when he or she last used opiates chronically, a time when that person had high levels of tolerance, there is a serious risk of overdose. This is because they have lost their tolerance to the respiratory suppressant effects of opiates.

Tolerance and physical dependence are temporary, but addiction is a chronic disease. Thanks to modern neuroscience and genetic methods, we have a very sophisticated and elegant understanding of opioid action. We now have a responsibility to help addicts find the treatment and prevent overdose.

Addiction is a chronic illness, with genetic, environmental and social aspects that are similar in scope to illnesses…