CAR T Cell Therapy, Are We There Yet? 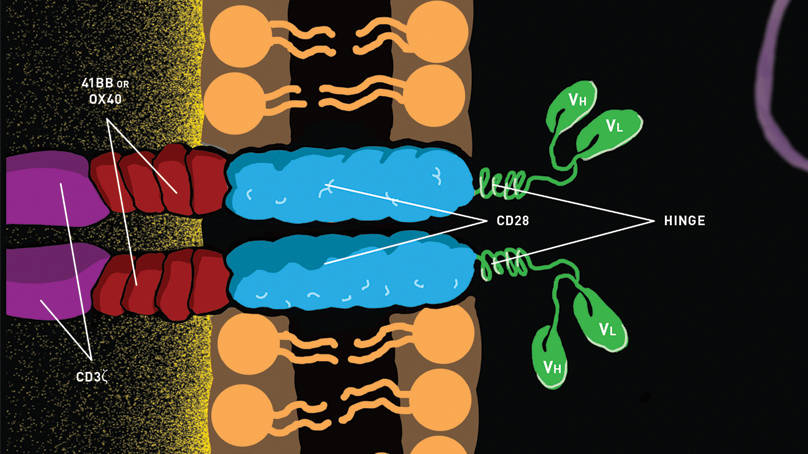 Cancers have cooked up ways to suppress, coerce, and evade the immune system. For instance, cancers can shut off anti-tumor T-cells, thereby promoting their survival. In response, researchers and physicians are exploring immunotherapeutic approaches that are designed to strengthen the immune system’s anti-tumor arsenal. One emerging treatment strategy that is demonstrating considerable promise is Chimeric Antigen Receptor (CAR) T-cell therapy. CAR T-cells are powerful tools that target and destroy cancer cells. The CAR itself is a marriage between an antibody and the signaling portion of a T-cell receptor. T-cells removed from a patient, engineered to express a tumor-specific CAR, and infused back into the patient are now able to effectively kill those cancer cells.

This form of personalized medicine has many advantages:

Achievements using CARs to mediate regression of leukemias and lymphomas

The U.S. Food and Drug Administration designated immunotherapy as a breakthrough therapy in 2014 based on previous successes and the promise to improve survival outcomes in cancer patients. CAR T-cell therapy currently benefits leukemia and lymphoma patients, with response rates as high as 70-90% in some cases. For this therapy to succeed, CAR T-cells, first, must be able to distinguish diseased cells from healthy cells and, second, must be able to physically interact with their intended target cells.  For leukemia and lymphoma, the cell surface marker CD19 distinguishes the tumor cells, allowing the design of a matching, specific CAR. Additionally, CAR T-cells are introduced into the patient’s blood, which allows direct access to both leukemia cells and lymphoid tissues. Together, these key features of blood-based malignancies have made them attractive and effective targets for CAR T-cell therapy.

CAR T-cell combination therapies are also being tested. A recent chronic lymphocytic leukemia (CLL) study indicated that adding a novel kinase inhibitor to a CAR T cell therapy improved CAR T-cell expansion in humans and improved tumor clearance and survival in mice. In the clinic, Juno Therapeutics and MedImmune are collaborating to treat non-Hodgkin lymphoma. They plan to use both CAR T-cell therapy and T-cell checkpoint inhibitor blockade, another form of immunotherapy that promotes the immune system’s anti-tumor responses. Combining CAR T-cell therapy with other novel therapies has the potential to dramatically improve patient outcomes by attacking the multiple avenues that a cancer uses to survive.

Although CAR T-cell therapy has strong efficacy in improving outcomes in patients with blood-based malignancies, its successes are not without limits. Two related and significant side effects of using enhanced antitumor T-cells, especially in treating leukemia, are cytokine release syndrome (CRS) and tumor lysis syndrome (TLS). CRS is the quick and massive release of proinflammatory cytokines into the bloodstream; TLS is the quick and massive release of the contents of dying cells into the bloodstream. Together CRS and TLS pose serious health complications. Clinical studies at the National Cancer Institute have indicated that treatment with low dose standard chemotherapy before CAR T-cell therapy reduces toxicity, potentially because the prior, smaller reduction in tumor burden reduces the likelihood of subsequent CRS and TLS.

Based on CAR T cells’ therapeutic success in treating blood malignancies, further refinements to CAR therapeutic approaches are underway that may benefit patients with solid tumors as well. With a few notable exceptions (melanoma and renal cell carcinoma), solid tumors are challenging to treat with CAR T-cell therapy. First, identifying unique surface markers that distinguish solid tumor cells from normal tissues has been difficult. Second, a solid tumor’s structure, the matrix that surrounds it, and its highly immunosuppressive nature, do not permit CAR T-cells to contact their target cells effectively. Despite these limitations, solid tumor studies in mice are bolstering creative problem solving in the CAR therapy development arena.

CAR T-cell therapy certainly has come a long way from its origins in transplant research, where it was learned that T-cells were the responsible parties for graft rejection. Combining an antibody’s ability to specifically recognize a tumor with a T-cell’s power to eliminate it culminates in a clever technology that is sure to drive further innovations in cancer treatment.