The earliest stages of development are fleeting, but the biology of what happens right after a mammalian egg is fertilized is startling. Think about it: one cell divides into two, starting a process that creates a mature organism. These cells possess what is needed to produce tissues that allow us to think, see, run, filter blood … everything. Then they divide again and again. These cells are called pluripotent stem cells, and they give rise to all the cells in the body. And JAX researchers are probing the mysteries of these earliest stages of life. 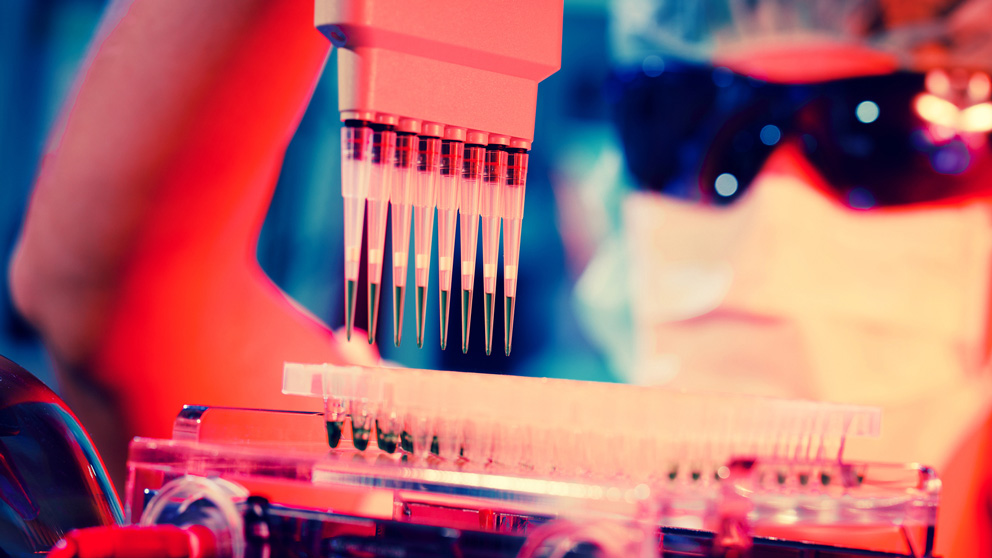 Soon after a sperm fertilizes an egg the cell divides into two. They divide into four cells, which continue to divide and divide and divide. Eventually, in mammals such as mice (and ourselves), they acquire familiar characteristics of skin cells, neurons, contractile muscle cells, liver cells, and so on and so on. The ultimate result is a highly complex, mature organism composed of trillions of cells, each with a specialized function.

But everything starts with two, four, eight cells. These amazing cells from the earliest stages of development are biological marvels and the focus of intense research inquiry. Known as pluripotent stem cells, they possess the ability to divide and differentiate into all the specialized cells and tissues we need. At The Jackson Laboratory (JAX), pluripotent stem cells are also important tools for studying development, manipulating mouse genetics, and more.

The process of development, it turns out, is one of exquisite timing, an orchestrated dance of gene activation and repression that sends certain cells down certain maturation paths. All cells within an organism have essentially the same genome sequence, after all (well, almost, but that’s a different story), so what makes a skin cell different from a liver cell comes down entirely to which genes, out of thousands, are expressed and when. It’s a long path, and it needs to proceed without a hitch to produce a functional organism.

You would think, given the demands of such a complicated process, that it would be similar if not identical between members of the same species. The developmental landscape of one mouse, for example, would be the same as that of another, even if their individual genetics differed slightly. But that’s not the case, and a team at JAX has taken an in-depth look at the biology underlying the differences.

It’s long been recognized that it’s easier to culture and maintain pluripotency in stem cells from some strains of mice than from other strains. Researchers figured out that inhibiting certain signaling pathways would allow them to work with the more reticent cells, but why are they different? To find out, the large JAX team, led by Associate Professor Laura Reinholdt, Ph.D., Assistant Professor Chris Baker, Ph.D., Assistant Professor Steve Munger, Ph.D., Professor Gary Churchill, Ph.D., and Research Scientist Dan Skelly, Ph.D., closely investigated the gene expression patterns, genomic landscapes and phenotypes (traits) of a large number of pluripotent stem cells with differing background genetics.

“It’s something we’ve wanted to do for years,” says Reinholdt. “We knew that genetically diverse pluripotent stem cells reacted differently to culture media conditions, and we had to make adjustments as a workaround. But that didn’t get at why they were different, and we’ve been wondering about the underlying genetics that might play a role.”

In two recent papers in Cell Stem Cell, they confirm that different genetic backgrounds do in fact play a significant role in creating variable pluripotency traits. They also found thousands of specific sites within the genome that affect gene expression associated with pluripotency, including 10 hotspots that coordinate genetic regulation throughout the genome. Focusing on one of the hotspots, the team found a single variant that mediates a cascade of molecular events affecting pluripotency.

“The studies are among the first to focus on genetic variation and how it affects embryonic stem cell function,” says Skelly. “And working with mice allowed us to validate the effects of a single variant, which has yet to be done in human cells.”

The papers further highlight the power of mouse models, as the work is very challenging to do in human cells, for various reasons. Human induced pluripotent stems cells (iPSCs), which are made by reprogramming mature cells back to a pluripotent state, do provide some opportunities in this area. They cannot yet be used to see the effects of specific genetic variants as can be done in mouse stem cells, however.

The findings also underscore the importance of the non-coding, regulatory regions of the genome, which comprise more than 98% of the full genome sequence.

“There’s a lot of interest in understanding how regulatory variation affects genome function,” says Baker. “The variant we focused on is regulatory in nature, and the paper shows that it affects transcription factor binding, function and gene expression.”

Moving forward, the researchers are following the regulatory chain out to the protein level, which adds yet another layer of regulation. Ultimately, they seek to identify how the early differences and genetic variation impact cell fate choice. How do the cellular differentiation processes differ between strains, as the stem cells ultimately commit to certain mature cell lineages? And do the genetic variants affect gene expression in general or just at specific stages?

It’s true that mouse pluripotent stem cells differ from human, requiring different culture media to establish a steady pluripotent state. Nevertheless, in-depth explorations of cells from diverse mouse strains may reveal conserved rules governing the genetic programming and protein functions involved with development and differentiation, with the potential to impact human iPSC research. Knowing how to tweak differentiation protocols for different genetic variants and how the cells enter particular pathways that result in mature cells and tissues is crucial for understanding iPSC function. And, down the road, that understanding has important implications for iPSCs fulfilling their promise for regenerative medicine and other clinical applications.