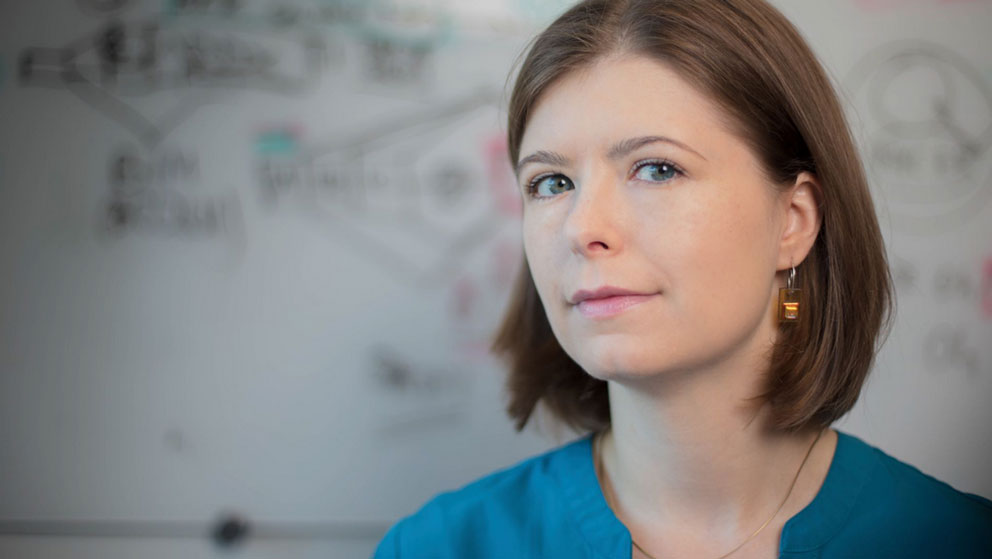 Five-year, $2.1 million federal grant to Olga Anczuków of JAX will reveal role of splicing-factor defects in cardiac or neurological disorders, cancer and more.

A wide variety of human diseases may result from defects in splicing factors, which control the version of a given gene that is expressed. A Jackson Laboratory (JAX) research team led by  Olga Anczuków-Camarda, Ph.D.Investigates how alternative RNA splicing contributes to cancer with the goal of identifying novel clinical biomarkers and targets for precision medicine.Assistant Professor Olga Anczuków, Ph.D., is uncovering how splicing factors are regulated, with the goal of developing molecules to correct splicing-factor defects.

In the highly simplified, so-called central dogma of biology, the genetic instructions written in DNA are copied (transcribed) into messenger RNA (mRNA), forming individual “machines” that each build one or more proteins—large, complex molecules that play critical roles in the body. But there are additional mechanisms that greatly increase the potential variety of proteins.

Following transcription, a process called alternative RNA splicing enables the creation of different spliced mRNA versions that, in turn, can produce proteins with different functions. “Splicing is like the editing process in filmmaking,” Anczuków says. “Just as inserting or deleting a scene in a movie can change the movie’s meaning, RNA splicing can deliver a very different genetic message.”

Where the silver screen meets the genomeWhether joining together pieces of film or our genes, splicing controls how information is conveyed. It could also be the key to new cancer treatments. where-the-silver-screen-meets-the-genome

Not all splices improve the final product, be it movie or protein. Errors in the splicing process have been implicated in many diseases, such as neurological disorders, cardiac myopathies, diabetes, lupus and cancer.

Splicing factors are RNA-binding proteins that regulate splicing, and manipulating splicing-factor levels could lead to therapeutic approaches for diseases with splicing-factor defects, says Anczuków. A family of splicing factors known as serine/arginine-rich (SR) proteins have been implicated in a wide range of human pathologies, she notes.

The National Institute of General Medical Sciences has awarded Anczuków a five-year grant totaling $ 2,126,262. “This grant leverages our lab’s expertise in developing tools and models to study splicing dysregulation in diseases,” she says. “We will focus on post-transcriptional regulation as an important modulator of SR protein expression, and a potentially actionable pathway for tool and therapeutics development.”

The Anczukow LabInvestigates how alternative RNA splicing contributes to cancer with the goal of identifying novel clinical biomarkers and targets for precision medicine.Anczuków and her lab will focus on regions in SR protein genes called poison-exons.

“We hypothesize that poison-exons play a critical role in maintaining a tight regulation of splicing-factor levels, which is necessary for normal cell functions,” she says.