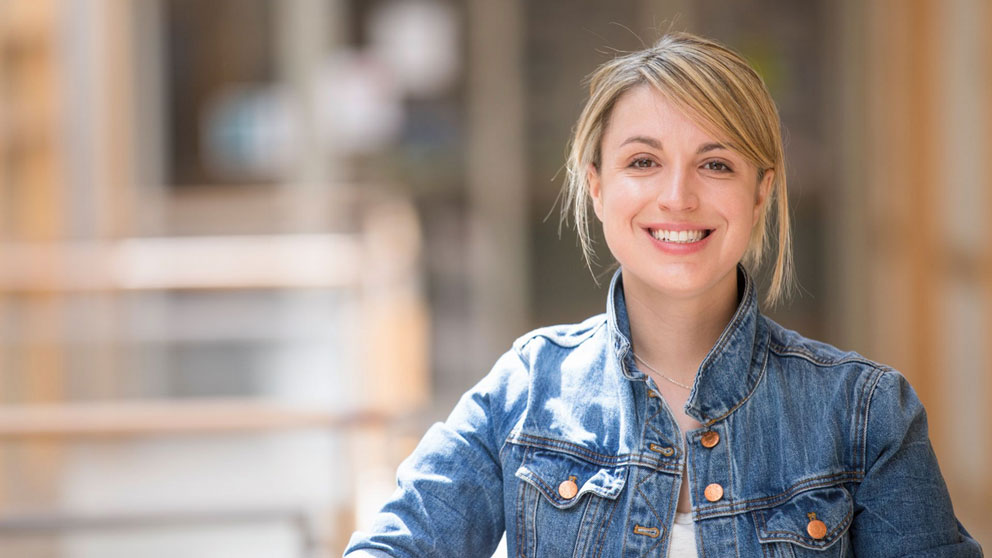 That’s how recent JAX alumna Kathryn Morelli, Ph.D., described the situation that faced the family of  A cure for CarolineJAX Professor Robert Burgess and collaborators are developing personalized gene therapy for a Texas child suffering from a neuromuscular disease.Caroline . Caroline has an incurable disease called Charcot-Marie-Tooth, or CMT. She is six years old. Four years ago, Morelli and a large team of collaborators took on the challenge of creating a cure for Caroline. And now they might have it.

CMT affects muscles, though indirectly, through effects on the nerves that control them. As the disease progresses, muscles deteriorate, and patients become weaker and weaker. A major obstacle to curing CMT is that there can be no single cure. Each CMT patient’s symptoms are caused by different fundamental processes going wrong — and those differences are underscored by distinct mutations that give rise to the disease. So while one patient might be helped by a therapy affecting the rate at which proteins are made, that same therapy would be useless in another patient, who instead might be helped by a therapy that eliminates toxic proteins that result from their genetic alternation. CMT is a surprisingly prevalent disease, affecting about 1 in 2,500 people, but because of the variation in its underlying causes, it has to be thought of as a rare disease — with any single patient requiring their own unique therapy. How do you find a cure for a disease that affects very few or even just one person?

Cooperative Ph.D. TrainingJAX offers Ph.D. students an exceptional opportunity to gain expertise in mammalian genetics and genomics in partnership with our degree-granting partner universities U Conn, Tufts, and U Maine.phd-programs

The path to CMT

Morelli joined the lab of JAX Rob Burgess, Ph.D.Studies the molecular mechanisms of synapse formation, development and maintenance in peripheral neuromuscular junctions and retina.Professor Robert Burgess, Ph.D. , in order to solve this problem. After her undergraduate studies at University of Vermont and a couple years at Harvard Medical School’s BWH Regenerative Medicine Center, Morelli joined the Graduate School of Biomedical Science and Engineering Ph.D. program at University of Maine, a  Cooperative Ph.D. TrainingJAX offers Ph.D. students an exceptional opportunity to gain expertise in mammalian genetics and genomics in partnership with our degree-granting partner universities U Conn, Tufts, and U Maine.cooperative partner with JAX in training early-career scientists. Burgess presented Morelli with some possible projects for her Ph.D. thesis, and she was attracted to the CMT challenge.

“It was a very difficult project,” she recognized. “Although high-risk, it was compelling. We could at least try to cure a really rare disease.”

Morelli realized her interest in science and biology early on, the only subjects she liked in grade school. In high school, as a potential first-generation college student, Morelli had help from a guidance counselor, Mary Hoyt, who helped her see a path forward in science – and helped her navigate the financials of college. Morelli worked as a Federal Work-Study student while completing her degree, which taught her to be organized and disciplined, skills that would be essential to her gene therapy research. Morelli benefited scientifically from working her way through college, as she was employed as a research assistant for Rae Nishi, Ph.D., a specialist in neurodevelopment. Nishi became Morelli’s first scientific mentor.

“She was a wonderful mentor," Morelli says. "She gave me my first real, independent research study even though I was just an undergraduate.”

When Morelli began her Ph.D. research, doctors in Houston had just discovered a mutation that was likely causing CMT in Caroline in a gene already known to be involved in CMT in other patients. That gene is called GARS. But the risk was that Caroline’s form of CMT is much stronger than that of most CMT patients. CMT patients usually don’t have symptoms until late adolescence or adulthood and can usually live reasonable lives with the disease, Caroline started to show symptoms at the age of 13 months — and the disease threatens her life.

The plan was to generate a mouse whose Gars gene carries the same mutation as Caroline’s Gars gene and find out if the mouse shows CMT-like symptoms. If Morelli could design a mouse that mimicked Caroline’s disease, she could test if a gene therapy targeted against the mutant gene could cure the CMT symptoms in the mouse.

And if it worked for a mouse, maybe it could work for Caroline.

Morelli and JAX’s used cutting-edge gene editing – CRISPR – to recreate Caroline’s mutant Gars gene in a mouse. But would the mouse have CMT symptoms? In mice, CMT phenotypes don’t appear until about two weeks of age. So when Morelli’s mutant Gars mice were born, an anxious two weeks began.

“We thought it was the causative mutation but we didn’t know,” said Morelli. “People were waiting for the answer. The family was waiting. I just wanted to give them a clear answer right away, so that they could move on to other strategies if necessary. But finally, I could tell them, ‘I think this might help you.’”

It takes a team

The mouse carrying Caroline’s mutant Gars gene showed CMT-like symptoms. Morelli’s collaborators, the lab of Scott Harper, Ph.D., at Nationwide Children’s Hospital, designed a gene therapy that should destroy the mutant Gars. The big experiment Morelli undertook next was to treat mice carrying mutant Gars with the Harper lab’s gene therapy and see if CMT progression could be arrested – or even reversed. The experiment is challenging, requiring an all-day procedure to deliver the gene therapy, and it has to be repeated, in many individual mice, to make sure effects are real and not simply chance.

Although, even before starting her experiment, Morelli sought out advice from a whole team of gene therapy pioneers including Steven Gray, Ph.D. and his postdoctoral associate Alejandra Rozenberg, DVM, at the University of North Carolina as well as Lindsay Wallace, Nettie Pyne, and Allison Fowler from Harper’s lab at Nationwide.

“It was like getting advice from a group of superheroes," Morelli says. "I can’t thank them enough.”

With a plan in place, she then spent several months treating the mutant mice and measuring their symptoms, day after day. “I had a very structured lifestyle for those six months but I was determined to figure out if this therapy could help.”

As Morelli continued to analyze the promising effects of the gene therapy on the mice carrying Caroline’s mutant Gars gene, she saw more signs that CMT symptoms were improved.

“The mice gained weight. They were stronger and more active,” she described. “For a little girl who’s 6 years old and 20 pounds, gaining another 20 pounds would be a big deal.” Based on Morelli’s encouraging findings, her collaborators are now investigating the safety of the gene therapy. “Efficacy is just one thing,” said Morelli, “but it needs to be safe.”

A neglected population? Not by us.​With leading scientists, international networking, precision animal models, and next-generation genetics and genomics technologies, The Jackson Laboratory is investing in the futures of people suffering from rare diseases.rare-disease-research

Meanwhile, Morelli is moving on to a postdoctoral research position at University of California, San Diego, working with Gene Yeo, Ph.D. She returns to a childhood interest in understanding how the brain works.

“Learning disabilities run in my family,” she explained, “and there are really no good medications for these disorders.” She’s interested in addressing autism, too, and is intrigued by complex genetic disorders – those in which multiple mutations synergize. But Morelli will continue to follow what happens with Caroline’s CMT gene therapy.

“I didn’t know all of this was going to happen,” Morelli said, looking back over her Ph.D. research. “I’ve worked with a lot of people. I’ve really learned a lot about interdisciplinary research, about collaborations and working in teams. It felt really good to hand over my results to Dr. Jerry Mendell.”

Mendell is a world leader in gene therapy for neuromuscular diseases. Caroline has visited him at his clinic at Nationwide. Now, Mendell and the team at Nationwide are working with the Burgess lab to determine the feasibility of treating Caroline and to seek FDA approval for this experimental treatment.

Does Morelli think Caroline might one day be able to receive the gene therapy?

Learn more about the questions being asked and the challenges being taken on by JAX Researchers. Sign up to become a rare disease research insider.