How can we develop therapies for Alzheimer’s disease? 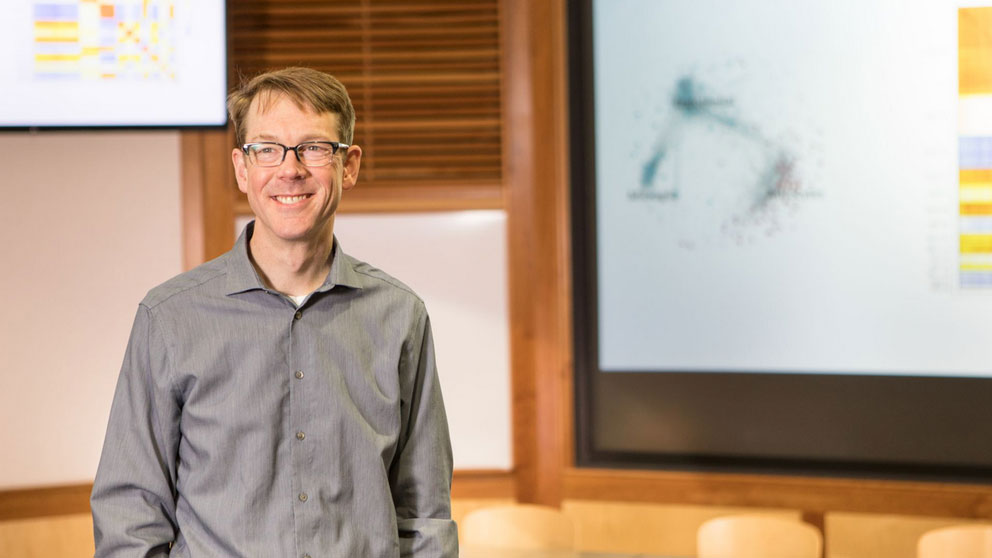 Associate Professor Greg Carter, Ph.D., is working to understand the fundamental biology of Alzheimer's disease and model its complexity, using big data to create a complete picture of the disease. Photo by Tiffany Laufer.

Alzheimer’s disease is still poorly understood despite its huge costs and burden. Associate Professor Greg Carter, Ph.D., is working at the intersection between patient and mouse research to develop accurate disease models and develop effective therapies.

Think about all the variables associated with a disease that affects older people, such as late-onset Alzheimer’s disease.

You have baseline genetics that help determine who’s susceptible and who’s less so. There’s environment, which usually changes many times over the course of a lifetime. And there are behaviors, such as diet and exercise. Over time — in this case, decades — it all adds up to neurodegeneration and disease. Or it doesn’t.

Now think about assembling enough of the information to effectively model all of it experimentally. That’s what Carter is trying to do.

Carter originally came to JAX in 2010 to tackle one of biology’s most challenging tasks: modeling complex traits and complex human diseases in an experimental organism, in this case mice. As a computational biologist, he can work in any disease area, and he has research interests in cancer and autoimmune diseases such as lupus. But as his program has grown and evolved, it has formed an intersection of sorts, in which information from human clinical research is integrated with research using mice to push biomedical research forward. And his primary focus is now Alzheimer’s disease.

The goal is to develop effective therapeutics and bring them back to the patients to prevent or cure the disease.

Carter’s approach has grown from his background in particle physics, his original field of study. It applies computational expertise and mathematical precision to see through the messiness of biology and find the important patterns and signals. It was a somewhat unusual perspective in biology not long ago, but it is becoming more and more essential as the field explodes with data that yield insights only grudgingly.

“When you collide two gold nuclei in a particle accelerator, they’ll break into 5,000 different particles,” he says, alluding to his physics past. “I would try to reconstruct what really happened by tracking back to the moment of the collision. In biology, there are multiple levels of data, such as genetic, proteomic, metabalomic and many, many more, all interacting to produce the state of the organism. So how do they combine to produce that outcome, which might involve a disease like Alzheimer’s? And how can we construct a model that not only includes all these data but also predicts what will happen if we add another variable?”

Alzheimer’s disease is a progressive, fatal neurodegenerative disease. Its burden is already massive — the direct costs of caring for those with it and other dementias totaled an estimated $259 billion in 2017 alone — and will rise steeply as the population ages. Efforts to cure, slow or prevent it have usually focused on reducing buildups of beta-amyloid plaques or tau protein tangles in the brain, its physiological hallmarks. Unfortunately, so far nothing has succeeded in affecting disease progression.

Progress is being made, however. Researchers are using advanced brain imaging techniques to visualize changes down to the molecular level. They’re investigating gene expression, looking for processes and pathways that are dysregulated in those with Alzheimer’s compared to those of their healthy peers. And they’re characterizing the molecular composition of blood, again seeking telltale differences between the healthy and disease states. The research has yielded tantalizing clues, but no clear diagnostic markers. Yet.

An important part of the change vanguard is the , a collaborative effort between JAX and Indiana University (IU). The Center uses patient data to guide the development of better tools to research the disease. Carter is a co-principal investigator of the Center along with JAX Associate Professor Gareth Howell, Ph.D.Applies genetics and genomics approaches to study age-related neurodegeneration associated with Alzheimer’s disease, dementia and glaucoma.Gareth Howell , Ph.D., Bruce Lamb, Ph.D., the Roberts Family Chair in Alzheimer’s Disease Research at IU, and Paul Territo, Ph.D., Associate Professor at IU. Another collaborating organization, Sage Bionetworks, gathers and opens access to the human patient data so critical to the Center’s research progress.

The scope of  How does 'big data' define you?Embrace the complexity of a trillion-line Excel file.the data the Center works with is massive . Take genome sequencing, for example. Differences in single bases (called SNPs) between genomes used to be identified using chips, which would yield about 15,000 SNPs. Now whole genome sequences yield more than 3 billion bases and roughly 15 million SNPs. Per genome. Multiply that by thousands of patients and you begin to see the problem. That’s just the start, and that’s where Carter comes in.

“There are multiple data types we need to integrate,” he says. “The genome sequences, RNA seq [which measures the extent to which each gene is expressed], proteomics [the amount of each protein present], metabolomics, genotype/phenotype [measurable traits] relationships, and more. All the data sets have different formats and different structures. But only by combining them can you see the whole picture and begin to figure out their measurable effects on the patient.”

The signals from the human data so far are providing intriguing avenues for the researchers to pursue. Immune function, in the form of neuroinflammation, has been recognized as a possible disease contributor for a while, and the inflammatory response to a high sugar, high fat “Western” diet suggests a way that it too can increase risk. Or perhaps the inflammation obstructs amyloid clearance, leading to a destructive buildup. Vascular health and dysfunction of the vital blood-brain barrier is also implicated in poor outcomes. Another strong genetic risk association is variation in serotonin signaling, which may lead to dysfunction in synaptic pruning, impairing neuron health. And there’s data suggesting that metabolic issues such as insulin resistance, a hallmark of type 2 diabetes, can also increase risk. 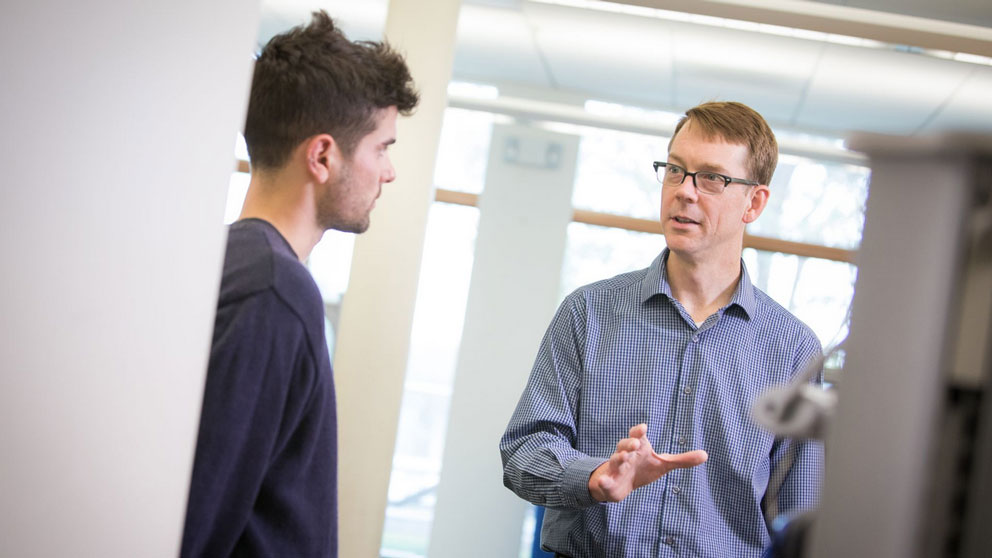 The Center’s goal is to bring the human data to bear on developing better Alzheimer’s research tools, namely mice. Historically, late-onset Alzheimer’s disease has been very difficult to model in mice, in part because of the time frames involved, in part because the disease wasn’t understood well enough in humans to model it accurately. With new research capabilities and human data in hand and growing all the time, however, the Center is able to generate an entirely different kind of Alzheimer’s mouse model.

With the advanced technologies now available in sequencing and genetic engineering (e.g., CRISPR), the mice can now carry the same genetic changes as humans, down to the single-base level. They can have the same biological pathways disrupted as patients, down to the molecular level. They can carry any combination of these perturbations to see if two or more are needed for disease to manifest. And they can mimic behavior patterns such as diet and exercise and can be monitored around the clock for changes in motion and response.

“Alzheimer’s disease is exceptionally complex, and it’s becoming clear that humans develop different sub-types, so the question is how to define it in the mice,” says Carter. “What biological disruptions or combinations of disruptions can we model? What are the effects of targeting these pathways? With the mice we can introduce sub-pathologies, track how they affect the mice in exhaustive detail, and pick it all apart. They provide a very powerful system for understanding the fundamental biology and pathology underlying the disease.”

In addition to developing the mice, the Center will make its data and at least 40 new mouse models available to the Alzheimer’s research community. Research groups around the globe will therefore benefit from its work and Carter’s ability to translate what happens in human patients to what will happen in the mice. Of course, the work that the Center and their research colleagues do has but one ultimate goal.

“With the mice, we can target the most important mechanisms to see what is going wrong,” says Carter. “Once we find accurate biomarkers, we can test what happens when we intervene very early and stop disease progression before any symptoms. The goal is to develop effective therapeutics and bring them back to the patients to prevent or cure the disease.”