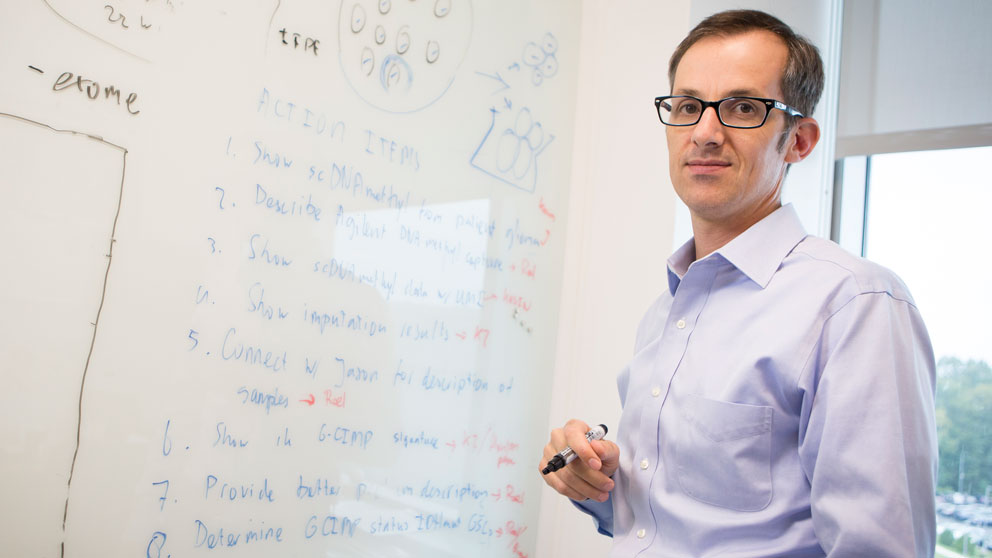 Roel Verhaak in his office at The Jackson Laboratory for Genomic Medicine in Connecticut. Photo by Tiffany Laufer.

Forging his own path

Roel Verhaak, Ph.D.Brain tumors, sequencing, computational biology.Roel Verhaak, Ph.D., is not beholden to the status quo. After all, his field, computational biology, didn’t exist, at least not formally, when he began his post-secondary studies. He quickly adopts new research methods and new ways to communicate results. And he now researches cancer with a focus on glioblastoma, a brain cancer that currently remains almost untreatable.

But while he’s quick to forge his own path, Verhaak doesn’t seek out the shiny and new for its own sake. Instead, he seeks better ways to accomplish his goals.

“Roel has a lot of enthusiasm for new technology and computational approaches, but he’s also quite pragmatic,” says Matthew Meyerson, Ph.D., Verhaak’s postdoctoral mentor at the Dana-Farber Cancer Center in Boston. “He is always looking for the solution to a problem, and he has the ability to apply the right tools and methods to find it.”

To improve those numbers, far more needs to be learned about the entire molecular landscape of glioblastoma, including the mechanisms that drive disease progression. Previous methods looked at cancer cells en masse, which could provide accurate data about what the “average” cell — and its genetic mutations — looked like. But researchers now know that individual cancer cells can differ quite a bit, even within the same tumor. And while there can be hundreds, even thousands of DNA mutations in these cells, some of them are much more important than others.

Not surprisingly, Verhaak is working at the very limits of research capability to learn far more about these dangerous cells than was previously possible. Since his arrival at The Jackson Laboratory (JAX) last October, Verhaak has taken full advantage of the advanced facilities and technologies available. Of particular importance is the  What is single cell genomics?Recent advances in the techniques for isolating single cells, together with methods for amplifying their genetic material, now make it possible to explore the genomes of single cells. single cell sequencing and analysis facility, which provides the ability to sequence multiple cells in tumors over time. Advanced cell engineering methods also allow for precise genetic manipulation to induce or remove specific mutations.

“The great level of detail is a game changer,” says Verhaak. “The behavior of single cells can be observed over time, including in response to treatments. These techniques are having a dramatic impact on cancer research.”

Verhaak’s recent paper in the journal  Glioblastoma ‘ecosystem’ redefined for more effective immunotherapy trialsA JAX-led research team detects gene expression patterns distinct from those of the surrounding immune cells, and characterizes the effects of chemotherapy and radiation treatments.Cancer Cell illustrates the progress being made. It provides detailed analyses of both the glioblastoma cells and their microenvironments, the tissues and cells (including immune cells) that surround the tumor in the body. The “ecosystems” in which the tumors reside affect how they respond to therapies, and developing an accurate picture of them is vital for improving treatments. The work will provide understanding of how an individual patient’s normal as well as cancer cells differ from those of other patients, providing another step toward more targeted, effective treatments.

Verhaak grew up in the Netherlands, and his interest in the natural world forms part of his earliest memories. As he grew up, he felt drawn to applied science and began his post-secondary work at Radboud University in 1996 with a biomedical research focus. When he got to college, however, a new phenomenon, the Internet, quickly caught his attention.

Cancer is universal, it touches so many people. We all have family members, friends or neighbors who have been diagnosed with it.

“When I went to college, many of my friends were in computer science,” he says. “They were already always connected with each other online and doing some pretty cool stuff. I liked online gaming, and their enthusiasm drew me in. Soon I started to write command line code and program myself.”

Verhaak didn’t abandon his original plans, but instead incorporated computational expertise. He graduated with a biomedical sciences degree and computer science minor in 2000, intending to pursue applied clinical research. But when he entered the lab of a medical informatics professor to begin working on his graduate degree, it did not go well.

“I was working with electronic health records, and after a year and a half I realized it wasn’t going anywhere for me,” says Verhaak, “so I left and got a job at a bioinformatics company.” During what Verhaak calls a “gap year” — if working as a software engineer qualifies as such — he decided to take a step back from research in the nuts and bolts clinical world, but not research as a whole.

Returning to graduate school in the department of hematology at the Erasmus University Medical Center in Rotterdam, Verhaak turned his focus to cancer research, namely studying gene expression in acute myeloid leukemia. For him, cancer represented both a connection to the real world and an opportunity.

“Cancer is universal, it touches so many people. We all have family members, friends or neighbors who have been diagnosed with it. And as a computational biologist, it’s a big field and a major research effort, so there were an abundance of positions in cancer labs.”

Upon successful completion of his doctoral work, Verhaak headed overseas for his postdoctoral training, landing a position in Meyerson’s lab in Boston. For Verhaak, it was a major transition, with both challenges and significant positive growth.

“At first it was difficult,” he says. “It was a new country, a new city, and at times I felt isolated. But after a while I met a lot of people who were there by themselves as well, and it became almost like a second college experience, with a great group of friends. Then I met my wife, Allison, who was also at Dana-Farber, and, well, I’ve been happy in the U.S. ever since.”

After completing his postdoctoral research, Verhaak launched his career as an independent investigator at M.D. Anderson Cancer Center in Houston, Texas, achieving rapid success. The chair of his department, John Weinstein, M.D., Ph.D., lauded him as a “leader in cancer genomics at M.D. Anderson” and a “rising star,” and Verhaak’s admiration for M.D. Anderson remains strong in return. Nonetheless, he began to wish for a faster-paced, more agile research environment than can be found at a major clinical center. He and his family also wanted to return to New England, where much of his wife’s family lives. JAX provided the perfect opportunity.

“My laboratory is ideally situated to take advantage of the excellent technology and research service infrastructure at JAX,” says Verhaak. “It’s a really good environment for research. Also, the faculty is fantastic, and I have wonderful colleagues here.”

A hallmark of Verhaak’s research has been his effectiveness in working with other researchers and sharing results. He has been at the vanguard of using new tools to quickly communicate and disseminate his results. Fittingly, he was an early adopter of social media. “Science is about communication,” he says. “I like Twitter because it’s immediate, and it levels the playing field. Meetings can be dominated by big names, but Twitter lets you interact quickly and informally with people at all levels.”

Verhaak also regularly posts preprints of his papers on bioRxiv, a preprint server launched to help biomedical researchers share results more quickly. Support from high-level researchers such as Verhaak has helped assuage early concerns about sharing preprints, such as being denied publication in a prestigious journal or having someone come along and “scoop” findings before they can be officially published. The situation is still evolving, but bioRxiv is now growing quickly.

Some researchers are known to be secretive, keeping their data and findings strictly to themselves until a paper is published. Verhaak is the opposite, and he has flourished in part because of his openness, retaining a perspective adopted early in his career. “When he arrived in my lab, I was encouraging people to contribute to The Cancer Genome Atlas (TCGA),” says Meyerson. “I wasn’t very persuasive. TCGA was a large collaborative project, and people were worried about getting lost in the crowd and not getting proper credit. But Roel was wide open to contributing and collaborating and letting the chips fall where they may. He is a great collaborator, and his TCGA work opened up a lot of opportunities for him, opportunities that his colleagues just didn’t see as clearly.”

For all that he has accomplished, Verhaak is still in the early stages of his career. His glioblastoma work has already provided important insight into the genomics of the disease, and he retains a strong drive to translate his research to clinical care. And moving forward, improving the lives of glioblastoma patients will be a family affair.

“Allison is in the final year of doctoral studies in clinical psychology,” says Verhaak. “She’s researching how glioblastoma affects cognitive function. So we’re looking at the same thing in a way: how does the cancer grow and what are the effects?”

The effects are severe and the stakes are high, and one can understand if shop talk is avoided over the dinner table. But that’s the status quo. Without a doubt, if the Verhaaks have their way, it will not last.