How do you mend a broken heart?

Sit quietly and hear it beating. Run uphill, spill coffee on your boss or meet your crush for dinner and feel it pounding in your chest. But chances are, at some point in your life, your heart may fail you.

According to the U.S. Centers for Disease Control and Prevention, nearly half of all Americans have at least one of the three key risk factors for heart disease: high blood pressure, high cholesterol and smoking. Heart disease is the leading cause of death in the world, and more than 600,000 Americans die from heart disease every year, more than from all forms of cancer combined. Men and women, of all races and ethnicities, are at risk.

Imagine if we could turn some kind of a switch so that our heart could regenerate as well as that of a salamander or a fish.

The first decade of the 21st century showed an encouraging decline in U.S. heart disease, thanks to preventive treatments such as statins and aspirin therapy as well as smoking cessation. However, according to a recent report in JAMA Cardiology, that decline is now showing an “alarming” diminishment, likely due to the increasing prevalence of adult obesity and type 2 diabetes.

“The human heart, although we are desperately dependent upon it, is one of the most vulnerable organs,” says Nadia Rosenthal, Ph.D., F.Med.Sci. The Jackson Laboratory professor and scientific director is searching for ways to repair the damage inflicted by heart disease, by harnessing regenerative powers that humans lack but that abound in the animal kingdom. “Imagine if we could turn some kind of a switch so that our heart could regenerate as well as that of a salamander or a fish."

While a single “switch,” she concedes, probably doesn't exist, there’s evidence that accessing these regenerative powers is possible. “That's the hypothesis with which my lab works on a daily basis: To find out what it would take to change our fate as humans who cannot heal their hearts into humans who can recover from a heart attack and do not progress to heart failure and other complications.”

There may be no one on Earth better qualified to accomplish this goal. Rosenthal is an international giant in three fields: regenerative medicine (she founded the Australian Regenerative Medicine Institute at Monash University in Melbourne), heart research (she was director of science at the Harefield Heart Science Centre of Imperial College, London, and holds a chair in cardiovascular science there) and modeling human disease in the mouse (she headed the mouse biology unit at the Rome location of the European Molecular Biology Laboratory).

And when Rosenthal joined The Jackson Laboratory in 2015, she brought a talented team of researchers, each exploring different avenues of heart disease and regenerative medicine.

Of mice and men — and salamanders

The formal name of a heart attack is “myocardial infarction,” which translates, scarily, as “death of heart muscle tissue.” In coronary artery disease and atherosclerosis, a waxy substance known as plaque builds up in arteries. When the flow of oxygen-rich blood to a section of heart muscle becomes blocked by plaque, the heart is starved of oxygen. The portion of heart muscle fed by the artery begins to die, and scar tissue replaces healthy heart tissue. That puts added pressure on the heart, which then fails to function correctly as a pump.

“When damage occurs to a tissue,” Rosenthal says, “immune cells immediately rush in to clean up the mess to get rid of dead cells and to launch an inflammatory response. And this is absolutely critical for the healing process. But, left unchecked, that inflammatory response turns into a pernicious cycle of fibrosis and scar formation. Scarring prevents functional tissue restoration.”

It’s well known that salamanders can regrow limbs and tails lost to injury, but they can even restore an injured heart to factory-fresh condition. The Rosenthal lab established that the immune system plays a critical role in these regenerative feats, and Research Scientist James Godwin, Ph.D., who has joint appointments at JAX and the Mount Desert Island Biological Laboratory, is pursuing the molecular mechanisms involved. “If we can learn what these more ancient organisms can do by manipulating their immune system in a very effective way to promote growth and avoid scarring,” Rosenthal says, “we will hopefully be able to tweak our own system to do a similar job someday.” 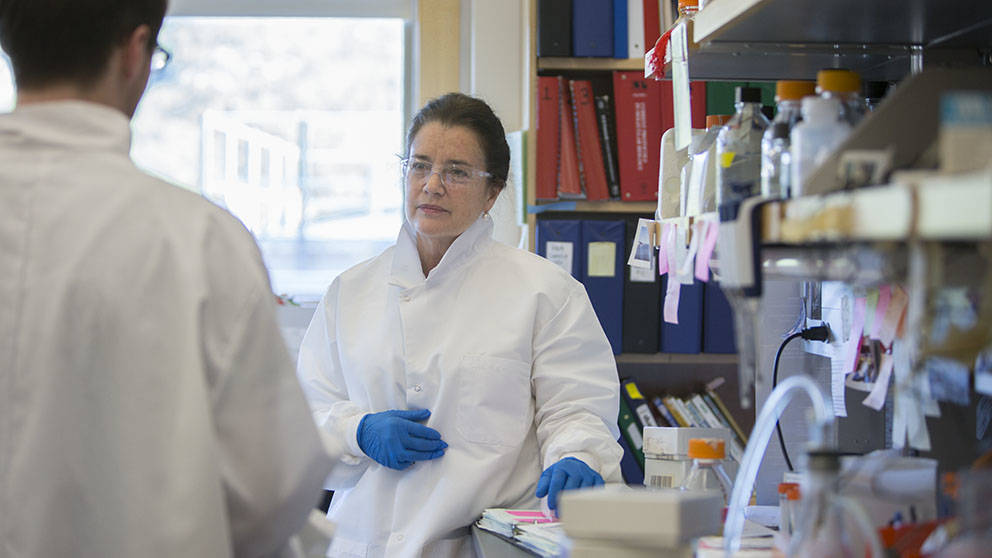 Regenerating human tissue, as promising as it sounds, carries the threat of the deadly kind of cell growth: cancer. Muneer Hasham, Ph.D., a research scientist in the Rosenthal lab, explores the unexpected relationship between the way in which the body responds to cancer and the way it responds to damage. “We’re looking at defects in pathways that allow cancer cells to grow out of control. If we can harness those pathways to stimulate growth of the right cells in the right places, we might be able to find a path towards steering damaged tissues to heal.”

In order to study the damage that heart attacks inflict on humans and other mammals, Rosenthal and her lab look to mice. “Mice can experience heart attacks, and progress to heart failure, just as acutely as humans do, depending on their genetic background. Indeed, in this way mice are just as variable as humans. We're trying to figure out whether subtle differences in their immune systems or cardiac cell makeup might be better or worse for the response to a heart attack.”

To explore that variability, Rosenthal looks at heart disease progression in a special JAX mouse population known as the Collaborative Cross (CC). “We have access to scores of mice that are related to each other, like members of a small village, but are nevertheless individuals and genetically unique. Unlike studying a human population, we can control the lifestyle factors of these mice: what they eat and how much exercise they get. And because we know the precise genetic makeup of each mouse, we can study the interplay between genes and lifestyle.”


In Farmington, Conn., cardiologist-researcher Travis Hinson, M.D., who has a joint appointment at JAX and UConn Health Center, is looking for markers of cardiovascular disease in the genomes of patients to better understand individual predisposition to cardiovascular disease. Rosenthal notes, “We can engineer Travis’ markers in mice, where we can control the genomic background as well as the environment.”

Congenital heart disease was once a high-mortality pediatric condition, but today early detection and treatment allow patients to live a normal lifespan. Another research scientist in the Rosenthal lab, Mauro Costa, Ph.D., has made the intriguing discovery that mice with mild congenital heart defects are more susceptible to diet-induced obesity.

“When you feed a Western diet to normal mice, they do gain weight,” Rosenthal explains. “But mice born with a slight congenital defect blow up like balloons on this diet. It occurred to us that there may be an unexpected correlation between the metabolic imbalance created by a Western diet, and the propensity for a human that might have an undetected cardiovascular problem, caused by a congenital defect, to become more susceptible to obesity on these diets.”

There's the possibility that within the next five years we could really make a breakthrough in the prevention and treatment of broken hearts.

Far from a simple pump, the heart is made up of many different kinds of cells. About a third of the organ is made of cardiomyocytes, heart muscle cells, which produce the contractile force that allows the heart to pump blood. Cardiomyocytes sit in a matrix of other cells, including fibroblasts, which form a sort of elastic cage holding the cardiomyocytes, immune cells and blood vessels. Scientists in the Rosenthal lab are investigating specific cell types in the cardiovascular system and their respective roles in heart disease.

Associate Research Scientist Milena Furtado, M.Sc., Ph.D., studies fibroblasts, the cells that form the scarring following a heart attack. “What Milena has discovered is that the fibroblasts in the heart of mouse and man are different than the fibroblasts in any other part of your body,” Rosenthal says. “They're clearly doing a job that is quite distinct from the fibroblasts in, let's say, your lung or your skin, to keep the heart healthy, and they are key players in the response to heart damage and disease.”

In another unexpected aspect of the cardiovascular system, Research Scientist Alexander Pinto, Ph.D., has found that the relative population of the various kinds of cells in the heart vary dramatically among mouse strains and, intriguingly, between male and female mice of the same strain. “We have no idea why that is,” Rosenthal says, “except for that fact, that, of course, females have to bear young, and that's an additional, obligatory stress on the cardiovascular system.” She believes this finding could provide insight into the differences in heart attack risks and symptoms between men and women.

Reflecting on the wide range of research programs going on in her lab, Rosenthal says, “The more we approximate the human condition, the more complex and expensive the research gets. Taking our findings to the next level will spell a new era for cardiovascular medicine. There's the possibility that within the next five years we could really make a breakthrough in the prevention and treatment of broken hearts. It takes people and it takes mice and it takes money, but most of all, it takes time.”