Answering the most important questions 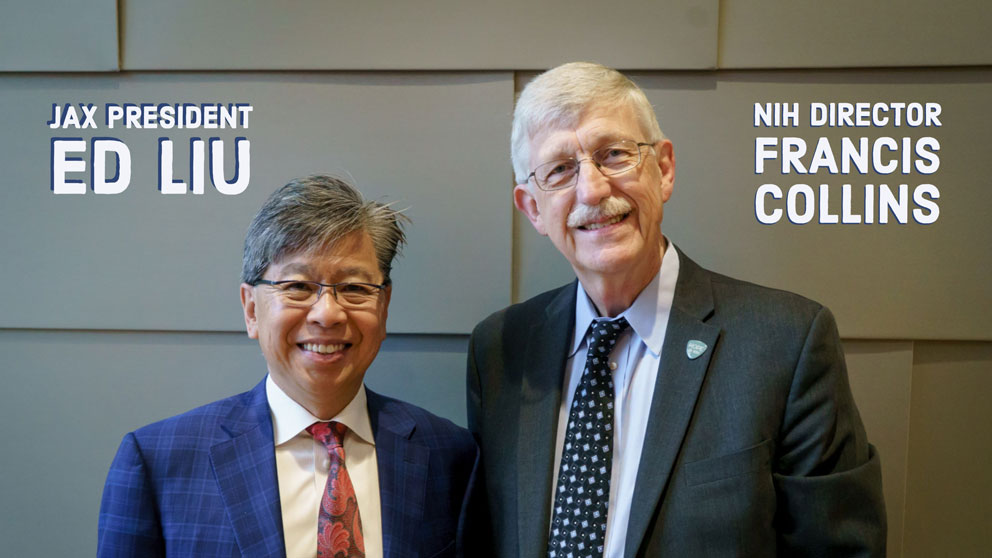 NIH Director Francis Collins at the Forum on Healthcare Innovation

The Forum on Healthcare Innovation has, in its short four-year history, attracted an impressive list of speakers and participants. Held annually at The Jackson Laboratory for Genomic Medicine in Farmington, Conn., the Forum gathers leaders from across the healthcare spectrum—healthcare delivery, biomedical research, insurance, finance, biotechnology, biopharma and more—to discuss how to translate medical innovation to patient benefit, with all that entails.

There was noticeable energy in the air at the 2017 Forum in anticipation of a talk from Francis Collins, Ph.D., director of the National Institutes of Health (NIH). The NIH shapes much of the biomedical research effort in the U.S. through policy initiatives and grant funding, and Dr. Collins therefore wields considerable influence. He has also provided stable institutional leadership since his appointment as director in 2009.

Dr. Collins opened his talk by stating that the NIH should stand for the National Institutes of Hope as well as Health. Its work supports some of the most important questions faced by humankind. How does life work? How does disease arise? When it does, how can we intervene? “This is a very exciting time,” he said, “because we now have the ability to answer questions that were previously unanswerable.”

As Dr. Collins noted, “We’ve found that it’s pretty hard to take 6 billion letters and translate them to actionable data.” Nonetheless, considerable progress is being made. One research project cited was the Human Cell Atlas, which seeks to characterize each cell in the human body, a mammoth undertaking given that we don’t know how many cells we have. (Actually, a recent calculation did come up with a number — 37.2 trillion — but the consensus is still far less precise.)

Dr. Collins also provided an update on the million-patient cohort, a key element of the Personalized Medicine Initiative launched by President Barack Obama in 2015. Renamed “All of Us,” it has already enrolled about 5,000 participants in its beta testing phase, and testing will be expanded to more than 100 locations next spring. Volunteers will provide a huge amount of data about themselves, including from their phones and wearable devices. Pooled, those data have the potential to inform healthcare, including prevention initiatives, for years to come.

Finally, Dr. Collins addressed his priorities as the NIH moves forward. Purchasing power has slid since 2004, so while he’s hoping for an increase for FY 2018, Dr. Collins noted, “We need to keep talking up. We need to work together to broadcast messages about the benefits of investment of biomedical research.”

The bulk of the funding will support the standard grant mechanisms, but some will support new high risk, high reward programs to spur particularly innovative research. Dr. Collins is also seeking to bolster the research workforce itself by launching programs to enhance diversity, retain more physician-scientists, and provide additional support for early-career principal investigators.

After Dr. Collins’ remarks, Jackson Laboratory President and CEO Edison Liu, M.D., joined his former NIH colleague onstage for a lively back-and-forth discussion. Dr. Liu revisited the early-career investigator issue first. PIs don’t receive their first funding from the NIH until they’re 42 years old on average, a discouraging statistic that underscores just how difficult it has become to launch an independent research program. Dr. Collins acknowledged that the field has lost promising scientists because of these barriers and described programs that are attempting to address them: giving first-grant PIs the opportunity to compete with other inexperienced applicants instead of established PIs for some grants, and freeing funding to improve the paylines for early stage PIs.

“We saw that the greatest productivity among NIH-funded scientists was from PIs on their first or second grant in some places,” he said. “We need to retain them. Having too much of the funding go to very senior PIs is not good for the long term.”

Also of considerable interest was a new public/private partnership, PACT, in which the NIH is working with 11 leading pharmaceutical companies to accelerate the development and implementation of cancer immunotherapies. Such partnerships can help bridge the gap between academic research and for-profit drug development, but it’s a tricky process.

“It’s been in the past four to five years that we’ve learned how it can work,” said Dr. Collins. “It’s essential that all parties have high-level buy-in, and they need to identify and work toward common goals that will benefit the collaborators.” He added that another large-scale effort to address the opioid crisis and implement non-addictive medications is underway, with 33 companies participating.

Dr. Liu veered away from the biomedical/pharmaceutical world to ask if behaviors that we already know are good for us (e.g., exercise) could be supported by insurance or through other means for disease prevention. Dr. Collins noted that at the federal level, the Centers for Medicare & Medicaid Services (CMS) will reply “show me the data.”

How do you individualize exercise and show what works best for which person? How does exercise confer its health benefits at a molecular level?

“Our medical system is a sick care system, so means of prevention like exercise don’t get the support they should,” he said. “It’s a constant struggle to get past that mindset. Maybe the ‘All of Us’ program can generate data that will help to address the problem.”

“Can you talk about your faith and your science and how you reconcile the two?” Dr. Collins described how he came to his faith later in life, while a medical student. “I wanted to wrestle with the questions I had in a different way,” he said, sounding very much the scientist, “so I started to explore the paths of faith perspectives and found it an interesting way to enlarge my horizons.”

While acknowledging that faith and science often seem at odds in the public discourse, he hasn’t found them in conflict personally. “I find it quite easy to reconcile the spiritual view and scientific view in my own life,” he concluded.