Hidden in the skin 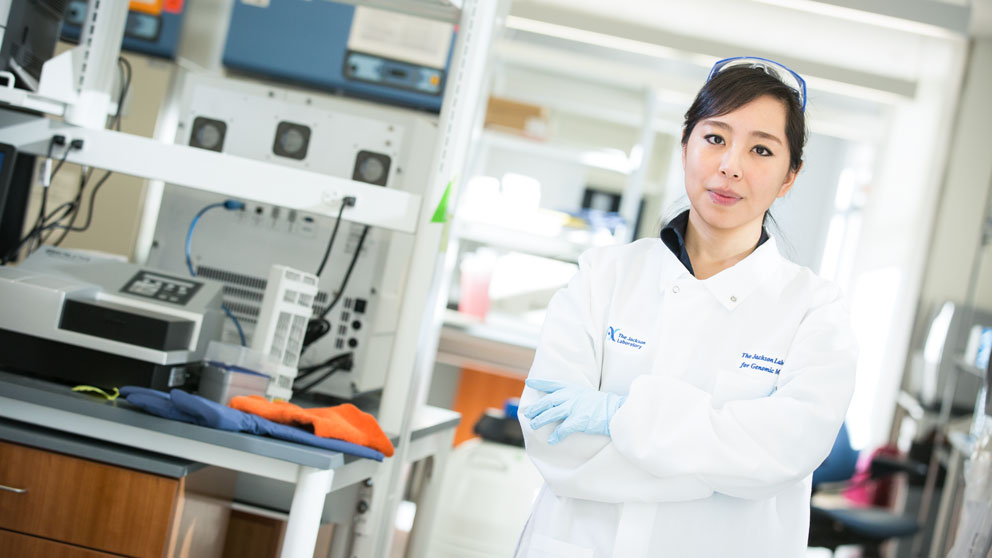 Though she started her laboratory at JAX just a few years ago, Assistant Professor Julia Oh and her team has already blazed bold new trails in microbiome research. 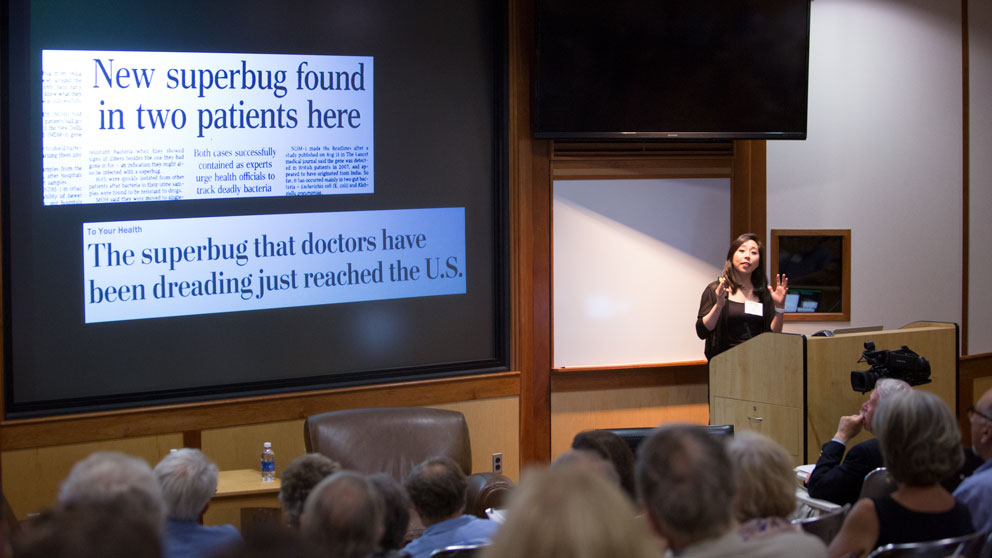 Assistant Professor Julia Oh presents on infectious disease research during the Forum for Discovery at The Jackson Laboratory in Bar Harbor, Maine. 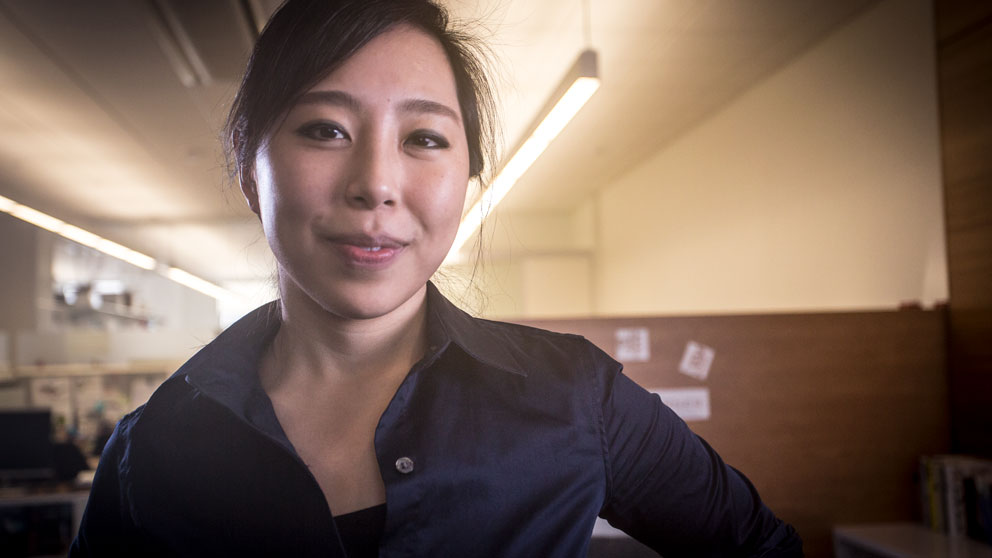 In her lab at The Jackson Laboratory, Assistant Professor Julia Oh is leveraging the tools for exploring microbial communities to their full potential in order to reveal the biology of the microbiome. 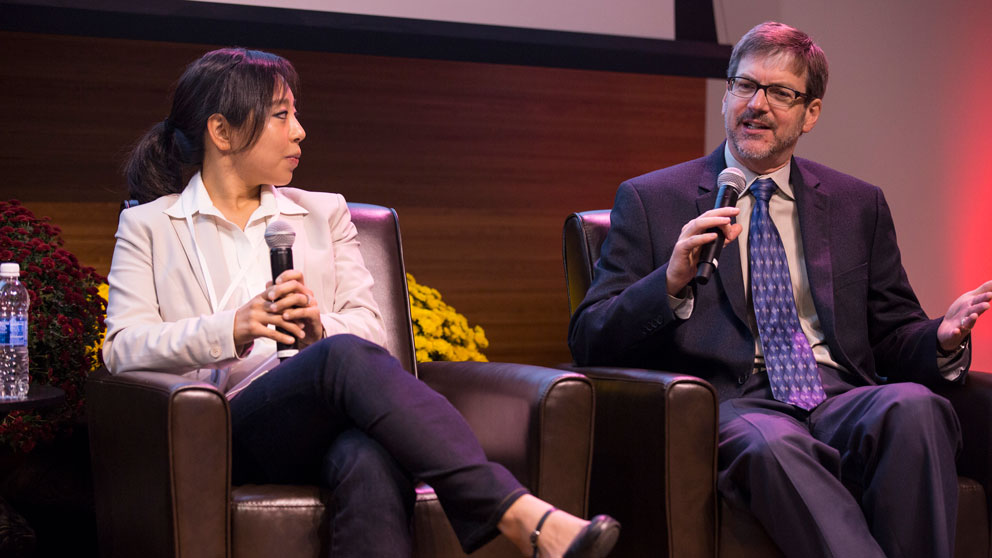 Assistant Professor Julia Oh, Ph.D., probes the depths of human skin to characterize the microbial communities that contribute to health and disease.

Did you shower this morning? Wash your hands before lunch? If so, chances are you effectively rinsed away the dirt and microbes clinging to your skin’s surface. But before you breathe a sigh of germ-free relief, consider this: even the most vigorous washing is unlikely to hinder — much less remove — the assortment of bacteria, viruses, fungi and other microscopic organisms that reside deep within your skin. This microbial menagerie, often referred to as the skin microbiome, is increasingly recognized both for its resilience as well as for its abilities to maintain health and, sometimes, incite disease.

“The skin microbiome is really remarkable,” says Oh. “It is constantly being repopulated and yet, across different body sites, we see that healthy individuals’ skin microbiomes are quite stable in composition. That’s surprising considering how exposed the skin is — to the environment and to other people.”

The application of sequencing technology to this problem was just so elegant. I was utterly captivated.

Although it is tempting to imagine it as one uniform system, the skin is actually a patchwork of many varied environments, each with distinct conditions. Facial skin is typically oily, while the forearms are dry. Feet, tucked inside socks and shoes for most of the day, are often damp and sweaty. Such differing ecologies attract and support the growth of unique microbial communities.

One of the first detailed views of these communities emerged as part of the Human Microbiome Project, a sweeping, five-year effort to catalog the microbes living throughout the human body. In June 2012, the consortium published a flurry of papers that described the results of a broad microbial census involving nearly 250 healthy volunteers. It spanned various body sites, including the skin behind the ears and along the inner crease of the elbows. Oh sees great potential in these types of studies, not only for enabling scientists to understand more about the tiny passengers that reside in skin, but also to lay the groundwork for deep, mechanistic studies that will guide the development of innovative microbial-based treatments for a variety of skin conditions, including psoriasis, eczema and cancer.

Though she started her laboratory at JAX less than two years ago, her team has already blazed bold new trails in microbiome research. Recently, Oh and her colleagues took a careful look at the dynamics of the skin microbiome. As published in Cell, they examined how the number and diversity of skin microbes change over time, both short periods (months) and long periods (years). Called a tour de force by experts in the field, the work helps illuminate the astonishing stability of the skin’s bacterial, viral and fungal inhabitants. Moreover, it suggests that the unique makeup of skin microbiomes in healthy individuals can be regulated by biological factors, such as genetics, immune health, skin physiology and skin health, as well as environmental factors like hygiene.

Oh remembers the precise moment when her interest in the microbiome emerged. She was roughly midway through her graduate work in Ronald Davis’ lab at Stanford, when a colleague presented the results of a recent research paper about the microbes in soil. “That paper just blew my mind,” she recalls. “I didn’t really think of microbes as living in complex communities. E. coli, Saccharomyces cerevisiae, those were the model organisms I worked with — and naively, how I thought they existed in the world.”

Indeed, some of the early tools for exploring microbial communities were first honed through studies of soil and seawater. Perhaps the most critical tool: genomic sequencing. “The application of sequencing technology to this problem was just so elegant. I was utterly captivated,” says Oh. With rapidly falling costs and increasing throughput, examinations of other microbial worlds soon became feasible.

Now, in her lab at JAX, Oh is leveraging these tools and many others to their full capacities in order to reveal the biology of the microbiome. One question that particularly intrigues her: How do microbes interact with and help shape the immune system? To answer it, she has launched several collaborations with fellow scientists, including Derya Unutmaz, a JAX professor and immunologist. Together, they are exploring how and when different microbes signal the immune system, and vice versa. By listening to these conversations, Oh, Unutmaz and their colleagues may uncover ways to interrupt or possibly even mimic them, with the goal of thwarting disease.

The researchers recently completed one of their first projects and are already preparing the results for publication. They also expanded their work by recruiting another key collaborator, Bruce Strober, who leads the department of dermatology at UConn Health.

“It’s a fantastic collaboration,” says Unutmaz. “Julia is one of the best collaborators I’ve ever had.”

In addition, Oh is turning her attention to another facet of the microbiome, but this time her focus is on the gut. Like the skin, the gut has many meters of surface area, each inch having an intimate interaction with its local microbiota.  The gut microbiome is well known for its role in digestion, allowing the body to extract nutrients from substances that it otherwise could not. “What hasn’t been fully appreciated is that the microbiome can also have very profound, indirect effects on how quickly our body can develop diseases like cancer, but also on how powerfully we respond to different therapeutics that act through the immune system,” explains Oh. “What we want to know is, does that also include the checkpoint inhibitors?”

Checkpoint inhibitors target the immune system’s internal safeguards (or “checkpoints”) that help prevent immune cells from running off the rails and attacking healthy tissues. Cancer cells can hijack these checkpoints, enabling tumors to grow without restraint. In the last few years, it has become clear that checkpoint inhibitors can bring about dramatic remissions in some cancer patients, but for others, the drugs are ineffective, particularly in certain forms of breast cancer. Oh and her colleagues want to figure out why, and whether or not some of the blame lies with the gut’s microbes. If true, the idea could spark new approaches to help augment or boost the effectiveness of checkpoint inhibitors and possibly other types of drugs.

Although the picture of the skin microbiome that Oh and others are painting is vivid and compelling, the view is far from complete. “Although we might think we know all the species that are present in the skin microbiome, we really don’t,” says Oh. “We have a relatively limited understanding of the skin’s biodiversity.”

This is the microbial dark matter — the microbes living in and on us that go undetected.

Oh’s recent study published in mBio helps illustrate this point. She and her colleagues harnessed a sequencing technology known as single-molecule sequencing. Unlike other methods for decoding the genomes of diverse microbial communities, this approach reads DNA as one long thread, instead of thousands of short fragments. The advantage is that previously unidentified microbes can be more readily found. “This is the microbial dark matter — the microbes living in and on us that go undetected.”

Using single-molecule sequencing to probe the skin microbiome of just one person, the researchers identified a species of bacteria that had not been previously characterized. Remarkably, the bacteria, known as Corynebacterium simulans, appear to be restricted to the skin on the foot, including the toe web, toenail, and heel. Moreover, in this particular individual, C. simulans accounted for the majority of the microbial dark matter within the foot microbiome — roughly two-thirds, all told. By developing additional computational approaches to help identify microbial dark matter, Oh and her lab believe that other types of Corynebacterium may also account for a significant portion of the undetected microbes living on the foot and other skin sites across different individuals.

She envisions many similar advances in microbiome research yet to come, stemming from innovations in technology and computational methods, as well as experimental approaches. “There are just tremendous opportunities,” Oh says. “I’m excited about the work we and others are doing.”

When good bacteria go bad… our bodies can turn against us.It is a new frontier in human health: Revealing the powers of our own microbes to fundamentally change our understanding of diseases of all kinds.