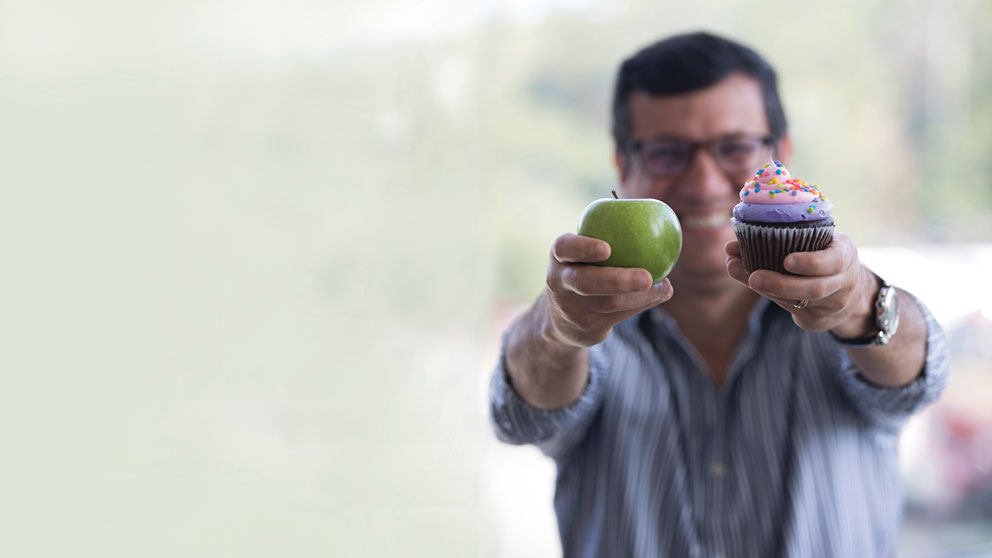 What are you having for dinner tonight?

Now, think about what you would have for dinner if your health and longevity depended on what and how much you choose to eat. Research in diseases of aging, and in aging itself, is revealing a powerful role in our diet.

In short, the so-called  Does a 'western diet' increase risk of Alzheimer's disease?JAX research provides insight into the role of the western diet in Alzheimer’s disease.Western diet,  high in fat and sugar, is contributing to the rise in obesity, type 2 diabetes, hypertension and high cholesterol among Americans. And all these conditions, in turn, exacerbate risk for the most deadly genetic diseases such as heart disease, cancer, Alzheimer’s disease and kidney disease.

“Unfortunately the curve of type 2 diabetes is going in the wrong direction, and we’re living longer as well,” says Gary Gibbons, director of the National Heart, Lung and Blood Institute. Speaking at the  Human and Mammalian Genetics and Genomics: The McKusick Short CourseThis course includes daily lectures in the mornings and evenings as well as afternoon mini-symposia, workshops, tutorials, demonstrations and a poster session. There is special emphasis on student-faculty interaction. The faculty is diverse in terms of disciplines and the students in terms of stage of career and fields of concentration. This diversity makes for an enriching experience for all. Although the course schedule is quite full, there is time set aside to enjoy the natural beauty of Mt. Desert Island and Acadia National Park.58th Annual McKusick Short Course at JAX, co-presented with Johns Hopkins University, Gibbons comments, “So we have an aging population that’s more and more obese, and has more and more hypertension.” He calls this “a conspiracy” against the hearts, brains and kidneys of aging Americans.

At the heart of the matter

The leading cause of death worldwide is coronary artery disease, a complex disorder that may involve hundreds of specific genes. Thanks to the widespread prescription of statins, drugs called PCSK9 inhibitors and aspirin therapy, as well as smoking cessation, the incidence of heart disease has declined. Yet that decline has leveled off due to — you guessed it — the increase in the diet-driven conditions of obesity and type 2 diabetes.

“Heart disease is less prevalent than it was 50 years ago,” says JAX research scientist Mauro Costa, “because we’ve been able to treat the preliminary symptoms of the disease, by reducing hypertension and cholesterol. But we are not yet able to address the  How do you mend a broken heart?JAX researchers are searching for ways to repair the damage inflicted by heart disease, by harnessing regenerative powers that humans lack but that abound in the animal kingdom. genetic causes of heart disease, and thus provide truly preventive treatments.”

Evidence is accumulating that a healthy lifestyle can counter some of the genetic risk for heart disease. Sekar Kathiresan, a physician-scientist and human geneticist with Massachusetts General Hospital, the Broad Institute and Harvard Medical School, is the lead author of a paper in the New England Journal of Medicine analyzing the results of multiple studies of lifestyle and heart health, representing 55,685 participants. He shared the findings in a talk at the McKusick Short Course, confirming that adherence to a healthy lifestyle was associated with a reduced risk of coronary artery disease within each category of genetic risk.

What is this so-called healthy lifestyle? In the NEJM study, the researchers culled factors from the strategic goals of the American Heart Association: no current smoking, body-mass index of less than 30, physical activity at least once weekly, and a healthy diet involving higher consumption of fruits, nuts, vegetables, whole grains, fish and dairy products and a reduced amount of refined grains, processed meats, unprocessed red meats and sugar-sweetened beverages.

Costa is looking at the role of diet in a specific kind of heart disease, which involves a mutation in a single gene. As the name suggests, congenital heart disease (CHD) is a genetic disorder that causes heart defects during gestation. Today, postnatal and even prenatal diagnosis and treatment are enabling many infants born with CHD to survive and live a normal life span. But this success also means that parents born with CHD are more likely to pass the condition on to their own offspring. And adults with CHD may be more susceptible to the obesity, type 2 diabetes and other factors that can trigger heart damage.

Costa studies a mouse model of CHD, one with the same genetic defect as human patients carry. Some of the CHD mice receive a normal, mostly grain  How do you make a Western diet — for a mouse?Researchers at JAX are exploring the role of diet in a myriad of diseases related to aging, including glaucoma and Alzheimer's disease.mouse food;  others receive a high-fat diet, and a third group a formulation meant to represent the nutrient profile of the so-called Western diet.

“The two organs of the body that do the most work and consume the most nutrients are the brain and the heart,” he says. “And they have different nutrient needs: The brain consumes primarily sugar, in the form of glucose, and the heart’s main fuel source is fat.” Preliminary findings in Costa’s lab indicate that CHD causes metabolic changes that make a high-fat diet an even more potent trigger for heart failure than for normal individuals.

An ideal “healthy lifestyle” may not be the same for all kinds of disease, or even for all kinds of heart disease, Costa says. “Talking about cardiovascular disease is like talking about cancer: It’s not just one disease,” he says, “and in the future doctors may be able to prescribe specific diet and exercise regimes” based on an individual’s specific genetic risk for cardiovascular disease.

Researchers are also exploring the connections between diet and Alzheimer’s disease.  Aging puts us all at risk for Alzheimer'sLeah Graham is exploring how the brain responds to lifestyle to help understand what can be done to promote healthy brain aging.Leah Graham,  a postdoctoral associate in the laboratory of Associate Professor  The Howell LabInvestigates the early stages of age-related neurodegenerative diseases.Gareth Howell  published in Nature Scientific Reports showing the results of feeding the lab-formulated Western diet to mice from a normal inbred strain as well as a mouse model of Alzheimer’s.

All the mice showed several danger signs of disease susceptibility. This included loss of neurons, increased plaques (protein clumps) and more inflammation in their brains, all symptoms of Alzheimer’s disease in human patients.

Graham is now exploring how exercise — the other side of the lifestyle equation — could counter these negative effects and protect the brains of aging mice. “If we knew what genes respond to running, and how those genes function,” she says, “we could potentially develop new therapies for people who are unable to exercise.”

Diet, and specifically restricting calories, also appears to have a strong link to aging itself. Research dating back to the 1930s has demonstrated a link between a limited-calorie diet and extended life span, in a wide variety of research models: yeast, drosophila and c. elegans (laboratory fruit flies and nematodes), rats and inbred mice.

JAX Professor  The Churchill LabInvestigating the genetics of health and disease with a systems approach.Gary Churchill is taking these studies to the next level, looking at how different individuals respond to variations in calorie intake to pinpoint the genetic and physiological variations involved.

Humans are notoriously poor at sticking to any kind of calorie-restricted diet, and it’s impossible to conduct lifelong studies of this kind in humans. Mice provide an experimental stand-in, given their relatively short life span of mice (average two years), and the ability to control every aspect of their laboratory environment, including diet.

Churchill is one of the architects of a special kind of mouse colony known as Diversity Outbred (DO). The result of carefully orchestrated cross-breeding of genetically defined inbred strains, these mice nevertheless represent the kind of random-looking genetic variation you’d find in the human population.

“Some calorie-restricted mice in the DO population live incredibly long life spans,” Churchill comments, “some reaching almost five years of age,” the equivalent of a human living about 160 years.

Churchill is now segregating DO mice into groups receiving different feeding regimes throughout their life span. Control animals are on an ad libitum (“all-you-can-eat”) diet. Some mice are fed daily but receive a reduced amount. Fasting animals are provided food ad libitum on most days but spend a period of time each week with no food access.

Along the way all the mice will receive frequent and extensive physical evaluations to collect data that can later be correlated to how long they live. And because the genomic sequence of every mouse is known, overlaying this physiological data should provide unprecedented insights into the genetic impact of calorie restriction on health and longevity.

“While it is clear that some animal models, like the inbred C57BL6/J mouse strain, benefit from caloric restriction, there is also evidence that the effects can differ depending on the genetic makeup of the animal,” Churchill notes. “The same will likely be true for people: Caloric restriction may be a good thing for one person and not for another. Until we understand these individual differences, we have to be very cautious about recommending dietary changes for people.”

Understanding how diet influences the genetic components of aging and age-related diseases could someday lead to treatments that trounce the ill effects of poor nutrition.

In the meantime, all the evidence shows that the best way to stave off the diseases of aging is to maintain that American Heart Association-recommended healthy lifestyle. So skip the fries and reach for an orange, then go for a walk.