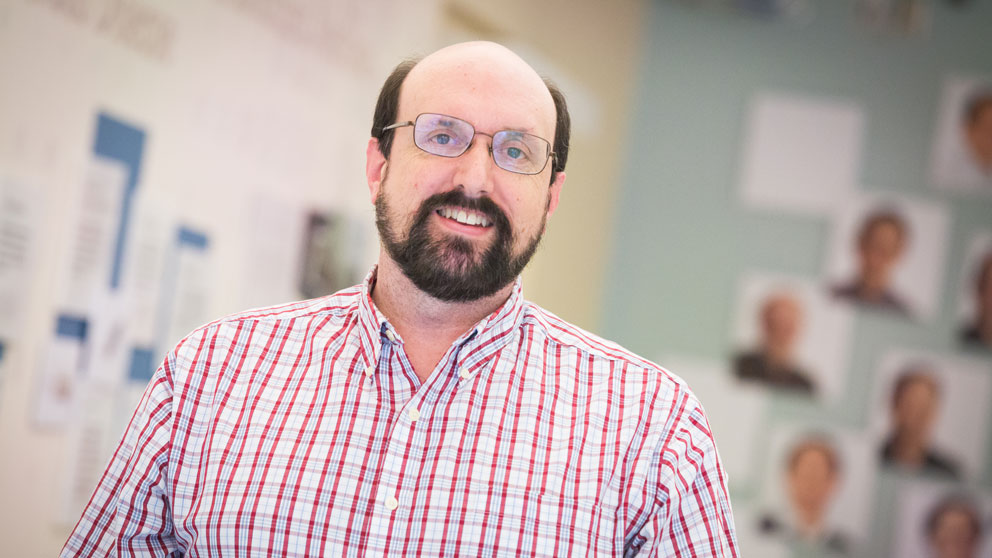 Neuromuscular diseases start by hampering mobility and progress to threatening vital processes like breathing and swallowing. Spinal muscular atrophy (SMA) may strike in infancy, Duchenne muscular dystrophy (DMD) in early childhood or amyotrophic lateral sclerosis (ALS) in middle age. There are may be hundreds of other neuromuscular diseases, some exceedingly rare.

It’s great to be able to help families dealing with a serious disease.

And Greg Cox, Ph.D., wants to knock them all out.

The Jackson Laboratory associate professor is at the hub of a network of researchers, mouse model experts, clinicians and patient families, all dedicated to finding the genetic causes and potential treatments for neuromuscular diseases.

In recent months, the U.S. Food and Drug Administration approved nusinersen as the first treatment for SMA, and edaravone as only the second available treatment to reduce the progression of ALS. Cox says better mouse models of neuromuscular diseases were essential to the development of both drugs, and in fact, it was a JAX-developed mouse that established the effectiveness of nusinersen.

In his own lab Cox focuses on SMA and its very rare variant, spinal muscular atrophy with respiratory distress (SMARD), as well as ALS and DMD.  “The fact that we have mice that develop the same disease symptoms and carry mutations in the same genes helps us to test many different therapeutic strategies in a relatively short time,” Cox says.

This morning Cox has had a phone conversation with the parents of a child with a severe neurological disorder due to a mutation in a gene called KIF1A. “They were hoping we had a mouse model with the same mutation,” Cox says. Though JAX does have two mouse models with mutations in that gene, he says, neither one exactly matches the patient’s.

Cox consulted with his colleagues Cat Lutz, Ph.D., director of the JAX Mouse Repository and Rare and Orphan Disease Center, and Senior Research Scientist Laura Reinholdt, Ph.D., who then launched a project to develop a new mouse model that would carry the patient’s identical mutation.

“Once the new model is available it will be going directly out to the researchers who are going to help them,” Cox says. “Lots of times these things just come together. It’s great to be able to help families dealing with a serious disease.”

Connecting with patients and their families is part of the job for physicians and clinical researchers; for a preclinical researcher like Cox, who focuses on the genetic mechanisms of diseases, it’s unusual, even extraordinary.

In part that’s because JAX may be the only “hit” patient families get when they search online for research programs in a specific rare genetic condition. JAX is an international resource for research in SMARD and other rare neuromuscular diseases, a role that includes developing and providing mouse models, data and drug-development services through its Rare and Orphan Disease Center.

Eric Sims, a University of Notre Dame associate professor, and his wife, Jill, are the parents of two children born with SMARD. One of Sims’ students organized a fundraiser to raise money for SMARD research after identifying the Cox lab online. Eric’s parents, Grant and Patty Sims, then connected with Cox to learn more about his SMARD research program, and subsequently established the Sims Family Fund for SMARD Research at JAX with a $1.5 million gift in 2015. 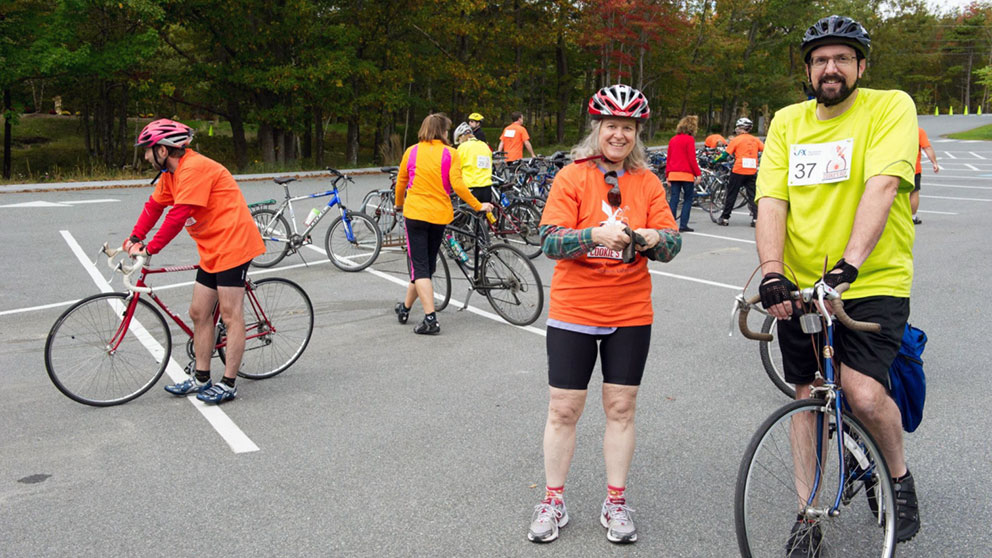 Once families and patients find Cox, his friendly, outgoing nature takes over. He has welcomed the Sims and many other patients and their families, including a pair of brothers with DMD, to visit his lab and learn about his work. He recently invited a college student with a mild form of SMA to conduct her two-week practicum in his lab. And he leads his own fundraising team, the “Neuromusculomics,” at the annual Walk to Defeat ALS in Bangor, Maine.

One of the organizers of the Walk is Janice von Brook, executive assistant to the JAX chief financial officer. Von Brook’s late husband, George Miller, lived with ALS for eight years.

“We were so glad to know that JAX researchers were working on ALS, but it was Greg who provided the comfort and the hope,” von Brook says. “He explained his research so we were able to understand it. But even more, he let us know that it impacted his work to talk to patients and their families because he could better understand how his work affected those with the disease.”

He always takes the time to talk to everyone and answer questions. I can’t describe how powerful this is when you feel very fragile. Greg’s answer is always, ‘Sure, how can I help?’

Cox speaks at the Walk each year, she says, “and he always takes the time to talk to everyone and answer questions. I can’t describe how powerful this is when you feel very fragile. Greg’s answer is always, ‘Sure, how can I help?’”

That helpful enthusiasm carries into the Cox lab, where the staff jokes he could turn a random question or comment into a Ph.D. thesis. “Besides being a genuinely nice person, Greg is the smartest person I know,” says David Schroeder, the Cox lab manager. “As a scientist, Greg has the ability to digest complex sets of data or experiments, boil them down to their constituent components, pick out the parts that are germane to his research, suggest an experiment to conduct and explain it all with perfect clarity — all in a 10-minute chat in his office.”

Cox first came to JAX in 1994 after earning his Ph.D. in human genetics at the University of Michigan, as a postdoctoral associate in the laboratory of epilepsy researcher Wayne Frankel. Says Frankel, who is now a professor of genetics and development at Columbia University, “Cox was the star postdoc in my young laboratory, producing three high-quality first author papers in the heyday of ‘positional cloning’ (as disease gene identification was known in the 1990s).”

In addition to his intelligence “and proclivity to come up with some creative and original ideas,” Frankel says, “a key attribute was his dogged persistence and patience. During his postdoctoral training and since, he was also well known for not knowing how to say ‘no’ when asked to take on a new project or task.”

The Cox lab works in what might be the loveliest lab space in America, with high ceilings and huge windows overlooking scenic Frenchman Bay and the Schoodic Peninsula. Cox shares that space with JAX Professor Rob Burgess, Ph.D., whose studies of peripheral neuropathies and other neurodegenerative and neuromuscular diseases frequently overlap with those of Cox.

Cox and Burgess often attend the weekly “Deviant Search,” a review of any mice born in the JAX colonies with spontaneous mutations, in search of new mouse models for their research. They bring mice with evident neurological mutations back to the lab for study. “Once we learn more about the disease, we figure out whose half of the lab should work on it,” Cox says. “If it's more of a peripheral neuropathy, it goes to Rob's side; if it's more of a motor neuron disease or muscular dystrophy, it goes to my side.” Finding a new and naturally occurring mouse model for a disease he studies, he says, “is like Christmas!”

“Greg is a very creative researcher,” Burgess says, “someone who is not afraid to tackle novel or complicated mechanisms in his research. He takes full advantage of the mouse genetics and resources available at JAX for his research.”

And, Burgess notes with a grin, “Greg is a guy who is not afraid to have a little umbrella in his drink while singing karaoke.”

Besides exercising his vocal cords at the karaoke machine, Cox believes in keeping his muscles in top working order. He’s an avid cyclist and recently more than doubled a JAX employee fitness center challenge to lift a million pounds in a month.

And he is fond of muscle cars: He is restoring his very first car, a vintage Mustang, lovingly named Emma.

But the vast majority of his time is spent in his office and lab, driven by a commitment to help patients. “I don’t think neuromuscular diseases are that different from other rare genetic disorders in concept, but the day-to-day impact that they have on the independence and quality of life of these patients, their families and caregivers is all-encompassing,” he says.

“Anything I can do to slow the decline of function in a patient or ultimately to improve any aspect of their quality of life really drives my passion for the science and the thrill of discovering something new that could be useful to someone else.”