Autoimmune diseases such as Sjögren’s syndrome, lupus and rheumatoid arthritis are typically adult-onset. Or so it appears. Research over the past 20 years has shown that the auto-antibodies underlying autoimmune disease can be present for years, even decades before the disease manifests. Understanding how the autoimmune responses initiate and progress to the point that symptoms appear may provide a therapeutic window for preventing disease.

Researchers led by Rachel Ettinger, Ph.D., of MedImmune LLC and including JAX Professor David Serreze, Ph.D., and graduate student Qiming Wang investigated the initial trigger in several mouse models of autoimmune disease, with a focus on a model for Sjögren’s syndrome. In a paper published online on October 19 in Science Translational Medicine, Ettinger et al showed how autoimmune events early in life in the spleen can drive later autoimmunity and disease pathology in local tissues, for Sjögren’s syndrome primarily the saliva and tear glands.

The mechanisms through which the adaptive (lymphoid) immune system functions involve a complex collaboration between B cells and T cells, in which antigen is presented and response driven in part by signaling molecules. Dysregulation of this highly coordinated process can lead to own tissue antigen presentation and subsequent autoimmunity. The researchers demonstrated how early blockage of one signaling system — CD40 and CD40 ligand — in mouse models interrupts the development of autoimmunity and prevents disease progression in mouse models of type 1 diabetes and autoimmune thyroiditis in addition to Sjögren’s syndrome. The intervention repressed B cell function and had an effect on a range of molecules, including other immune signaling pathways.

The authors caution that far more work is needed before clinical utility can be achieved. Before-and-after studies in humans are necessary to determine whether specific biomarkers can be found to distinguish highly at risk populations, for example. The work introduces an intriguing preventative therapeutic strategy, however, whereby individuals at risk for specific autoimmune disorders would be identified and administered the blockade therapy before acquiring disease symptoms. 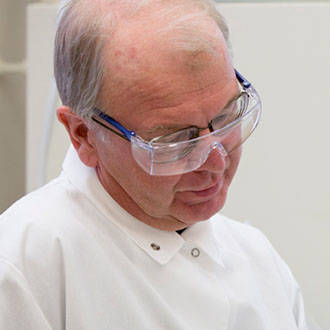 David Serreze, Ph.D., and his team researches the genetic basis for immunological tolerance to endogenous proteins, and the defects that can lead to autoimmune diseases such as type 1 diabetes.