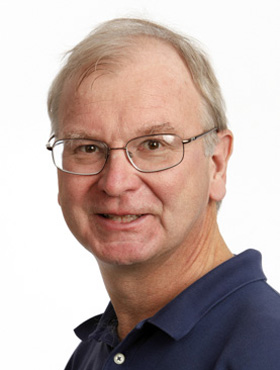 Our primary research interest is understanding the genetic basis for immunological tolerance to endogenous proteins. Defects in these mechanisms lead to many debilitating autoimmune diseases, of which type 1 diabetes (T1D) is one of the most serious. In both humans and NOD mice, T1D results when insulin-producing pancreatic ß-cells are destroyed by autoreactive T-cell responses. Thus, insights into the genetic mechanisms responsible for the normal maintenance of immunological tolerance can be gained by identifying the pathogenic basis of T1D in NOD mice.

Our primary research interest is understanding the genetic basis for immunological tolerance to endogenous proteins.  Defects in these mechanisms lead to many debilitating autoimmune diseases, of which type 1 diabetes (T1D) is one of the most serious.  In both humans and NOD mice, T1D results when insulin-producing pancreatic ß-cells are destroyed by autoreactive T-cell responses.  Thus, insights into the genetic mechanisms responsible for the normal maintenance of immunological tolerance can be gained by identifying the pathogenic basis of T1D in NOD mice.

T-cells recognize particular peptide/MHC antigenic complexes through expression of clonally distributed T-cell receptor (TCR) molecules generated by somatically rearranged gene sequences.  In addition to those derived from infectious pathogens, APC also display to T-cells MHC class I- and class II-bound peptides generated from endogenous “self” proteins.  A normal consequence of expressing a TCR that engages such “self-antigenic” complexes on APC at a critically high threshold level is the induction of signals triggering the deletion or permanent inactivation of potentially autoreactive T-cells, a process termed immunological tolerance induction.   Defects in such immunological tolerance induction processes underlie susceptibility to T1D.

In both humans and NOD mice unusual MHC class II genes clearly contribute to T1D by inducing pathogenic CD4 T-cell responses.  However, while representing common variants shared by many strains lacking autoimmune proclivity, the MHC class I molecules expressed by NOD mice also exert pathogenic functions essential to T1D development.  These common class I variants aberrantly exert diabetogenic functions in NOD mice through interactions with some of the multiple Idd genes located outside the MHC.  Previous combined linkage and congenic truncation analyses indicated a polymorphic gene(s) within a 5.4Mb region on Chromosome (Chr.) 7 co-localizing with the previously identified Idd7 locus exerts the strongest interactive effect in determining the extent to which MHC class I dependent diabetogenic T-cells undergo deletion during their development in the thymus.  Through use of a CRISPR/Cas9 genomic editing approach we have now identified an enhanced expression variant of the NFkB modulatory Nfkbid gene within the Idd7 region to be a primary interactive contributor determining the extent to which diabetogenic MHC class I restricted CD8 T-cells undergo thymic deletion. Potential translation significance of these efforts is provided by recent evidence that the human Chr. 19q.13 region which is syntenic to the murine Idd7 locus contains a gene(s) contributing to T1D susceptibility or resistance.  There is evidence that Nfkbid activity can be pharmacologically modulated.  Thus, in future studies we will test if pharmacological modification of Nfkbid activity might be considered as a possible future clinically translatable T1D intervention approach.

It is now known that in humans some common MHC class I variants such as HLA-A2.1 also contribute to T1D development when co-expressed with particular combinations of other genes.  The HLA-B39 class I variant appears to contribute to extreme early age of T1D onset in humans.  Using CRISPR/Cas9 genomic editing approaches we have now generated murine NOD mice that express human HLA-A2 or B39 class I variants, but no murine counterparts.  These genetically engineered NOD mouse stocks develop T1D in a manner dependent on autoreactive CD8 T-cell responses mediated by the human HLA-A2 or B39 class I molecules.  Hence, these genetically engineered NOD mouse stocks can be used as models to test means that may possibly attenuate diabetogenic CD8 T-cell responses of pathological relevance to HLA-A2 or B39 expressing patients (>60% of cases).

With collaborators at The Albert Einstein College of Medicine, we determined the ß-cell proteins insulin (INS) and islet-specific glucose-6-phosphatase catalytic subunit-related protein (IGRP) each contain two peptide epitopes primarily targeted by diabetogenic HLA-A2.1-restricted T-cells in our NOD stock expressing this human class I variant.  Other investigators subsequently verified these INS and IGRP antigens to also be targeted by autoreactive CD8 T-cells in HLA-A2 expressing human T1D patients. T-cell tolerance can be efficiently induced to peptides coupled to synthetic microparticles (mps) made of the already FDA approved for clinical use PLGA material used for dissolvable sutures.  Furthermore, the administration of autoantigens coupled to PLGA mps is already in clinical trials as a potential intervention for autoimmune mediated multiple sclerosis (MS).  Thus, we are now testing if administration of PLGA mps bearing various combinations of HLA-A2 restricted INS and/or IGRP peptides can exert a T1D protectice effect in our NOD stock expressing this human class I variant in the absence of murine counterparts. A further clinical translation issue in carrying out such studies is presently humans at high future risk for T1D can only be identified after they have already developed high levels of ongoing pancreatic ß cell autoimmunity evidenced by the presence of markers such as insulin autoantibodies (IAA).  Thus, to currently be clinically translatable a potential T1D intervention must be effective when initiated at a late prodromal stage of disease development.  For this reason we are testing if the PLGA mps antigen delivery approach can inhibit T1D development when initiated in human HLA-A2 expressing/murine MHC class I negative NOD mice that have already become IAA positive.

Given they provide the expression site for the MHC class II molecules that are essential to pathogenesis, it is not surprising that APC functions play a key role in T1D development.  Previous work indicated populations of B-lymphocytes expressing plasma membrane bound immunoglobulin (Ig) molecules specific for various pancreatic ß-cell proteins are a critical subtype of APC for T1D development in NOD mice, and also likely human patients.  The expression of such autoreactive Ig molecules allows B-lymphocytes to more efficiently capture ß-cell autoantigens for subsequent MHC class II mediated display to diabetogenic CD4 T-cells than other APC subtypes.

Mechanisms are normally in place to prevent the development or functional activation of B-lymphocytes expressing autoreactive Ig molecules.  We previously localized to a 6.2 Mb region on Chr. 4 a gene(s) within the previously identified over-lapping Idd9/11 loci that contributes to a failure of B-lymphocytes expressing autoreactive Ig molecules to be functionally anergized in NOD mice.  Combined congenic truncation and mRNA transcript expression analyses identified the Ephb2 and Padi2 genes located within this 6.2 Mb region on Chr. 4 to be strong candidates for contributing to the failure of autoreactive B-lymphocytes in NOD mice to be functionally anergized.  Of potential translational significance, Ephb2 was found to possibly function in a Mapk3 (aka Erk1) centric lymphocyte activation pathway also influenced by a subset of GWAS identified candidates for T1D susceptibility genes in humans.  The NOD Ephb2 gene is expressed at lower levels in B-lymphocytes than the differing allelic variant characterizing the closely related, but T1D resistant NOR control strain.  We have recently found transgenically increasing Ephb2 expression inhibits T1D development in NOD mice.  Studies are now underway to determine if  such T1D protection specifically results from enhanced Ephb2 expression in B-lymphocytes.

Given their significant pathogenic role, depletion of B-lymphocytes by the CD20 specific rituximab antibody was being tested as a possible T1D intervention approach in humans.  This study found that anti-CD20 treatment retards the rate, but does prevent the further erosion of residual pancreatic ß-cell mass in T1D patients.  We also found anti-CD20 treatment only inhibits progression to overt T1D development in NOD when initiated before, and not after the appearance of IAA.  This appears to result from our novel finding that B-lymphocytes in NOD mice rapidly down-regulate CD20 expression upon entry into pancreatic islets.  These collective results indicate that B-lymphocyte targeting strategies beyond the use of CD20 specific antibodies be considered as a possible T1D intervention approach.  In collaboration with investigators at Medimmune we tested if a pharmacological agent they developed that blocks activity of the B-lymphocyte survival factor BAFF can independently or in conjunction with anti-CD20 provide an improved means for preventing progression to overt T1D when initiated in NOD mice at a late prodromal stage of disease development than previously employed approaches.  We found that transient treatment initiated at a late prodromal stage of disease with the BAFF blockade reagent alone could inhibit T1D development in NOD mice.  Protection results from the B-lymphocytes that survived and/or rebounded following cessation of transient BAFF blockade becoming enriched for overlapping CD73 and IL-10 expressing phenotypes that exert T1D suppressive regulatory functions (Bregs).  However, such transient BAFF blockade induced T1D protective Bregs were sensitive to deletion by co-administrated anti-CD20.  This raises a further cautionary note in considering the use of anti-CD20 either alone or as part of a combination therapy as a possible clinically translatable B-lymphocyte directed T1D intervention approach.

B lymphocytes play a key role in type 1 diabetes (T1D) development by serving as a subset of APCs preferentially supporting the expansion of autoreactive pathogenic T cells. As a result of their pathogenic importance, B lymphocyte-targeted therapies have received considerable interest as potential T1D interventions. Unfortunately, the B lymphocyte-directed T1D interventions tested to date failed to halt β cell demise. IgG autoantibodies marking humans at future risk for T1D indicate that B lymphocytes producing them have undergone the affinity-maturation processes of class switch recombination and, possibly, somatic hypermutation. This study found that CRISPR/Cas9-mediated ablation of the activation-induced cytidine deaminase gene required for class switch recombination/somatic hypermutation induction inhibits T1D development in the NOD mouse model. The activation-induced cytidine deaminase protein induces genome-wide DNA breaks that, if not repaired through RAD51-mediated homologous recombination, result in B lymphocyte death. Treatment with the RAD51 inhibitor 4,4'-diisothiocyanatostilbene-2, 2'-disulfonic acid also strongly inhibited T1D development in NOD mice. The genetic and small molecule-targeting approaches expanded CD73+ B lymphocytes that exert regulatory activity suppressing diabetogenic T cell responses. Hence, an initial CRISPR/Cas9-mediated genetic modification approach has identified the AID/RAD51 axis as a target for a potentially clinically translatable pharmacological approach that can block T1D development by converting B lymphocytes to a disease-inhibitory CD73+ regulatory state.
Copyright © 2017 by The American Association of Immunologists, Inc.
View full list of publications

Researches the genetic basis for immunological tolerance to endogenous (own) proteins, and the defects that can lead to...

Investigating type 1 diabetes and the development of therapies using mouse models of the disease.

Elucidating the molecular mechanisms that underlie autoimmunity in Type 1 diabetes

How to block type 1 diabetes

Learn about which mice you should use as non-diabetic controls for non-obese, diabetic (NOD/ShiLtJ) mice.

Diabetes and the Forgotten Organ

The pancreas takes center-stage as the organ most closely associated with Type I Diabetes. However, a recent publication in PNAS reminds us...

We collect, cryopreserve and distribute mouse strains important to research in type 1 diabetes.

Uses genomic tools to characterize human immunity in both healthy and disease states.