Andrew Garrett uncovers the rules of the retina 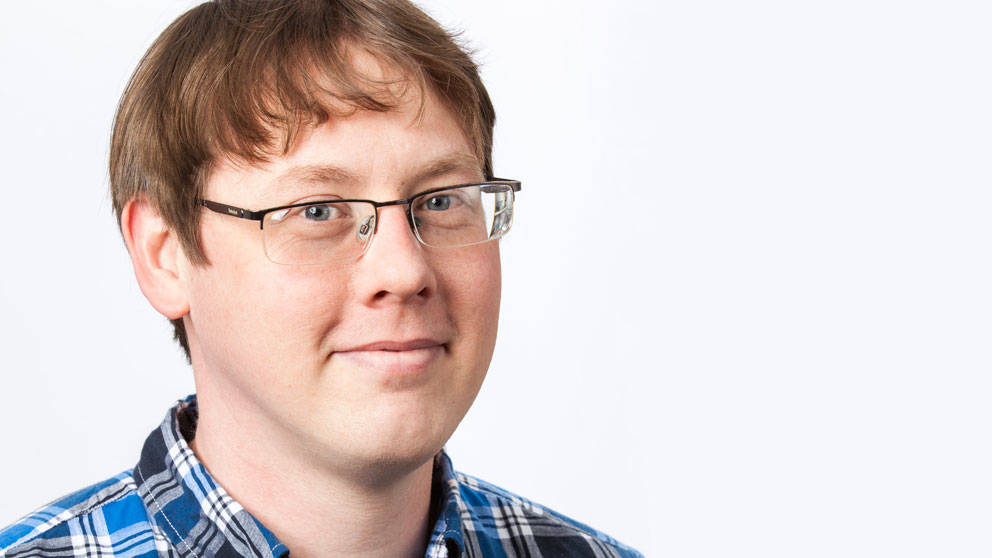 Andrew Garrett likes complexity. In particular, the complexity that underlies the retina. “There are about a hundred types of neurons. They have to be in the right spot, find the right partners, and get to the right place in the circuit. And I think that’s cool.”

Garrett is a postdoctoral researcher at The Jackson Laboratory in Bar Harbor, Maine. He came to JAX after earning his Ph.D. at the University of Iowa. After graduating, Garrett, who grew up in a suburb of Dayton, Ohio, traded Midwestern cornfields for Acadian spruce forests in order to join the lab of JAX Professor Robert Burgess, Ph.D. and study how the retina is constructed.

The complexity of the retina requires that it have a highly ordered pattern. Without strict rules about how neurons are organized in space and over time, there would be little chance of them making all the connections they need to make in order to produce a functioning circuit. Trying to assemble a retina without such rules would be like tossing a bunch of Legos in a pile and hoping that a space ship emerges. A low chance of success. But if there are rules — properties of each Lego (or neuron) that will allow it to interact with and only with a particular type of Lego (or neuron) — patterns emerge and, in the end, there’s a space ship. Or a retina.

At college, Garrett started off like many scientists, thinking he would go to medical school. He was at Cedarville University in Ohio, surrounded by farmland and many students pursuing health professions. But as he got more into his coursework, he realized that being a physician wasn’t going to satisfy his curiosity about how things work. He wanted to understand how complex tissues come together — how all of the different types of cells that make up an organ or a tissue, like the retina, work together to achieve a collective function, like vision. “And,” Garrett added, “how it happens correctly most of the time. There are so many parts that have to fit together in an exact way. It’s amazing that it doesn’t go wrong more often.”

Garrett is discovering the molecules that allow a neuron to recognize its correct partners, a fundamental part of retinal patterning and of all neural circuits. Garrett’s current work focuses on the signals that prevent a neuron from trying to partner with itself or an identical copy — a property called self-avoidance. According to Garrett, self-avoidance probably involves a combination of molecular signals: one that sticks neurons together and another that blocks stickiness. He thinks it might be the ratio between this stickiness and anti-stickiness that determines whether or not the two neurons form a functional connection, a synapse. But what determines stickiness and anti-stickiness is still unknown.

“In the retina, it’s clear when self-avoidance is working because of its organization,” explained Garrett, who is looking for conditions that cause self-avoidance to fail. “My focus is on the molecules, which is what you can study with genetics.”

One of the molecules in which Garrett is particularly interested is DSCAM. DSCAM stands for Down Syndrome Cell Adhesion Molecule, referring to its discovery as a gene found within the critical chromosomal region amplified in trisomy 21. DSCAM has since been implicated in other cognitive disorders and a DSCAM-related gene in Tourette’s Syndrome.

A powerful model of the mammalian nervous system is that of the fruit fly, and there, DSCAM is the key determinant of neuronal self-avoidance. In fruit flies, there are thousands and thousands of distinct types of DSCAM molecules. Each neuron makes a different set. When a particular DSCAM molecule encounters an exact copy of itself, it recognizes this identity and prevents the neurons from sticking. But in mammals, including mice and humans, there are relatively few types of DSCAM molecules. If DSCAM were the only factor, most every neuron would be recognized as “self." In the retina, something else has to signal when a neuron encounters an identical copy.

Garrett thinks DSCAM could be mediating self-avoidance by controlling stickiness. He’s found that DSCAM uses different parts of the molecule to regulate stickiness in different types of neurons. When Garrett changes one small part of the DSCAM molecule in the retina, some neurons show huge defects in self-avoidance whereas others show no defects. “Some neuron types are stickier,” explained Garrett, “and that could affect circuit formation.”

Garrett has also found that the sensitivity to DSCAM levels depends on a mouse’s genetic background. Uncovering the precise genetic difference might provide him with a key part of the self-avoidance mechanism — and might, eventually, help explain some of the variation seen in Down Syndrome cases. Garrett said, “The samples are in the freezer. I just need to have them sequenced.”

The American Association for the Advancement of Science (AAAS) has elected Jackson Laboratory Professor Gary Churchill as an AAAS Fellow, one of the…