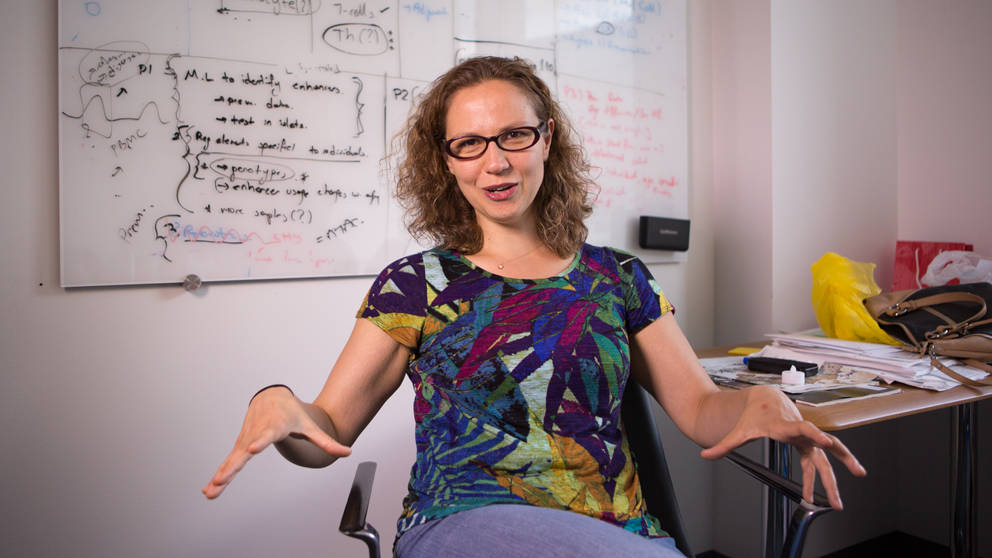 Duygu Ucar in her office at The Jackson Laboratory for Genomic Medicine in Farmington, Conn. Photo by Tiffany Lauffer.

JAX computational scientist Duygu Ucar bridges the worlds of biology and computer science to unlock the secrets of aging and age-related disease.

Why and how the body grows old has long captivated both scientists and lay people. But now, as evidence mounts that some of the most devastating human diseases — such as cancer, diabetes and neurodegenerative disease — are intricately linked with the aging process, that curiosity has become a focus on unearthing new insights leading to therapeutic strategies.

To be sure, aging is a complex problem to crack, in part because it involves inherited factors (genes) and external forces, like diet, lifestyle and the environment. One place where those worlds are thought to come together is the epigenome — the layers of information that surround DNA and, like a puppeteer pulling marionette strings, help determine when and where different genes get activated. For JAX Assistant Professor Duygu Ucar, Ph.D., the epigenome forms a kind of ground zero — a place to learn how biological differences, etched into our genomes and epigenomes, contribute to aging and age-related disease.

“If we want to understand what happens when we age, then we need to approach the problem from multiple biological angles,” explains Ucar. “Genomic and epigenomic methods allow us to do that, but to integrate and understand those data, we need powerful computational approaches.”

Ucar’s first love, scientifically speaking, is computers. Formally trained as a computer scientist, she began her academic career in Turkey at the prestigious Bilkent University, ranked among the world’s top universities. Because of her high scores on the school’s entrance exam, she earned a full scholarship and a rare invitation to matriculate in computer science.

After earning her bachelor’s degree, she moved to the U.S. to pursue graduate studies at The Ohio State University in Columbus, Ohio. There she began to wade into the vast ocean of biology, first developing algorithms to probe the intricate networks formed by interacting proteins, then uncovering key patterns that underlie their biological functions. As her fascination with biology grew, she began to explore other areas, including how genes get turned on (gene expression) and the DNA-binding proteins that help regulate this process (transcription factors). 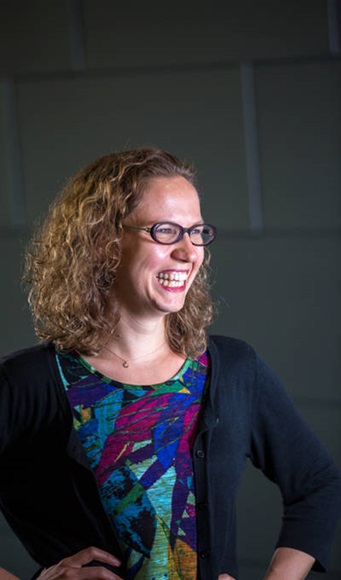 For her postdoctoral work, Ucar turned to the laboratory of Stanford’s Anne Brunet, a renowned expert on the biology of aging and longevity. There she became the sole resident computational scientist, recruited from a field of several hundred applicants to help Brunet’s group make sense of its increasingly large genomic data sets focused on aging.

“Duygu really stood out because she was very strong in computer science, but she was also quite interested — and well versed — in biology,” recalls Brunet. “That was quite rare.”

Together with her lab colleagues, Ucar set out to study just one piece of the sprawling epigenome — a specific chemical signature, known as H3K4me3, which was considered to be important for longevity in the roundworm, Caenorhabditis elegans. The team wanted to know more about the signature and explored a variety of other organisms (including humans, mice and plants) as well as diverse tissue types (such as brain, liver and heart).

“This was a fairly comprehensive approach. We put together a database that included hundreds of different cell types,” says Ucar.

By tracking the signature across diverse epigenomes, using machine learning and other analytical methods, Ucar and her colleagues made a surprising discovery. Instead of flagging short bits of the genome, as had been previously found, H3K4me3 also appears to fan out over much larger swaths, marking the genes that are essential in cell-specific functions. For example, in stem cells, genes that confer the unique capacity for self-renewal are marked by the H3K4me3 signature.

Though Ucar has since moved on and established her own laboratory at The Jackson Laboratory, Brunet’s team is still pursuing these findings. It is also extending the scientific legacy that Ucar began. As both a researcher and a teacher, she not only inspired her colleagues to think about biological problems from a mathematical point of view, she empowered them with the skills they need to conduct their own computational analyses.

“Duygu is super smart, so she’s able to quickly understand the question at hand,” says Brunet. “But she’s also very flexible in how she thinks about problems, and will try multiple types of analyses. That’s a huge asset.”

As an assistant professor at JAX, Ucar continues to explore the connections between epigenomics and aging. But now, she has her sight set on one system — the human immune system.

“As you grow older, your immune cells become less functional, which is known as immunosenescence. Immunosenescence contribute to age-associated increase in diverse diseases.” explains Ucar. “Uncovering the mechanisms behind immunosenescence is a first step toward delaying or curing it.”

For this work, Ucar is collaborating with JAX Professor Jacques Banchereau, Ph.D., and UConn physician-scientist George Kuchel, M.D. Together, the team is working to unlock the mechanisms of immune system aging by collecting and analyzing blood from roughly 100 individuals — young and old, healthy and frail.

One challenge is to integrate and analyze these ‘big data.'

“There are a number of scientific challenges here,” explains Ucar. “One challenge is to integrate and analyze these ‘big data.’ Not only do we have a lot of samples, but the data is also multidimensional.”

Many of the datasets Ucar and her colleagues are collecting span the entire genome. They include measurements of RNA, transcription factor binding sites, as well as epigenomic characteristics, particularly chromatin accessibility profiles, which classify areas of the genome according to how “open” — meaning they can be read by the cellular machinery — or “closed” they are.

Ucar, Banchereau and Kuchel are also incorporating data from large consortium efforts including Roadmap epigenomics project and ImmGen database from the Broad institute that have been made publicly available, further intensifying the data integration challenges. Despite these hurdles, the team’s findings will help illuminate the genomic changes in immune system aging, and highlight potential biomarkers of healthy and unhealthy aging. Ucar and her colleagues plan to extend these studies to include frail elderly and individuals with diseases (such as Systemic Lupus) to uncover genomic patterns that are associated with pathologies.

Further insights into age-related diseases will also flow from another project Ucar is leading together with JAX Assistant Professor Michael Stitzel, Ph.D., whose lab studies type 2 diabetes. Together, the team is taking a close look at the genomics of human pancreatic islets, which are considered to be the disease’s epicenter. Ucar and Stitzel are co-mentoring a graduate student, Shubham Khetan, who is studying the changes in the epigenomes of healthy and diabetic islet samples. Through this work, the team hopes to gain a clearer understanding of what goes wrong on a cellular and molecular level in type 2 diabetes.

This collaborative project underscores a common theme that runs throughout Ucar’s work. By leveraging her and her lab’s expertise in bioinformatics, network theory and machine learning they seek to drive innovation both in informatics and in genomics of human aging and aging-associate diseases.

“When we start a project, we discover a lot of computational challenges, some of which require further thinking and novel method development,“ says Ucar. “By studying these big data sets in the context of aging or age-related diseases, we not only understand the data more, we also understand what algorithms are missing and how we can develop novel computational methods.” One such tool developed in the Ucar lab recently published at Plos CB and is accessible online for the integration of diverse genomics data in the form of interaction networks.

Indeed, just as genomic technologies can propel scientists into unexplored worlds, Ucar and her colleagues are helping to pave the way toward a deep knowledge of human biology and disease.

“She is really poised to make great discoveries,” remarks Brunet. “I’m looking forward to seeing how high her star will rise.”