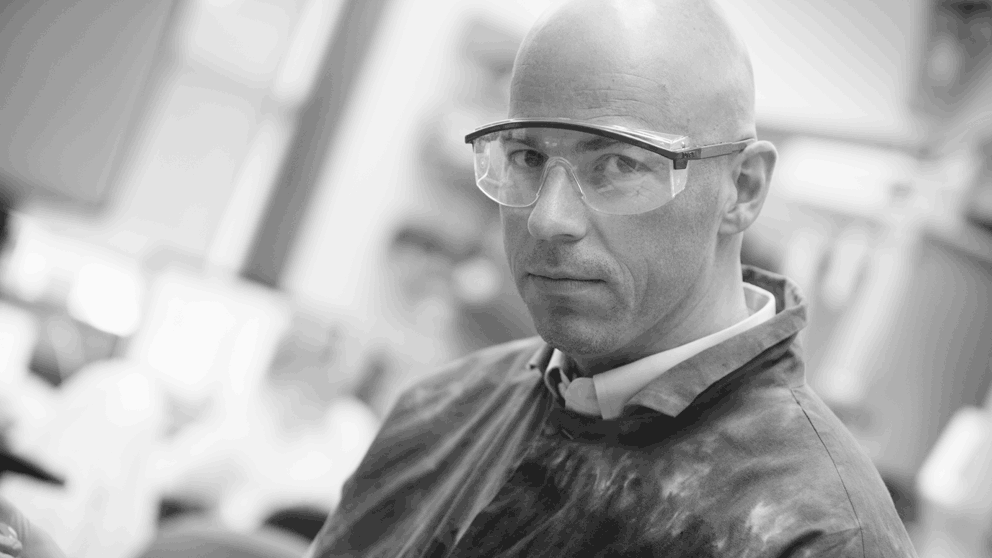 Chronic kidney disease affects more than half a million Americans, a number that is growing due to the aging population. (Kidney function declines with age.) Medical costs, also increasing, top $42 billion a year.

To zero in on the genetic factors of chronic kidney disease, JAX Assistant Professor Ron Korstanje, Ph.D., is investigating a special colony of mice—known as Diversity Outbred (DO) mice—that offers wide genetic variation, comparable to that found in human populations.

Jackson Laboratory founder Clarence Cook Little developed the first inbred strain of mouse, the DBA (for dilute brown agouti), in the early 20th century. By mating sibling mice for 20 generations, he created a population of mice that are essentially identical and thus a reliable platform for conducting experiments in biology and disease.

The research world still uses inbred mouse strains extensively for biomedical research, notably the C57BL/6J “Black 6” mouse, also developed by Little. However, by the early 21st century, some JAX researchers and their collaborators recognized that there was very little genetic diversity among the various standard inbred strains.

For humans with magnesium deficiency, we might be able to intervene in such a way that could restore some function.

Today the National Institute on Aging-funded JAX Nathan Shock Center of Excellence in the Basic Biology of Aging houses a large colony of DO mice. Each mouse receives extensive biometric analysis at specific intervals, contributing data that could provide insight into a wide variety of age-related conditions and diseases.

“We had a longitudinal cohort of 600 D.O. mice,” Korstanje says. “At six, 12, 18, 24 and 30 months, we collected urine and plasma to study.” The average lifespan of a mouse in the wild is three months, and in laboratory conditions 24 months, so the population is starting to decline. However, like certain humans, some of the DO mice are turning out to be especially long-lived. “We still have a few mice on the shelf, so we're still collecting.” His lab also conducted a more extensive cross-sectional study on other mice at six, 12 and 18 months, collecting kidneys and other tissues for additional studies.

“I think that's an incredibly powerful resource,” Korstanje adds. “For all these animals, we have so many different layers of information: genotype, gene expression, protein expression, histology, urine analysis. And we can ask, ‘What's the difference between six months and 18 months? We can map all those things.’ We can also ask, ‘Well, is this anomaly kidney-specific or is it something that we also see in other tissues?’ We can look at the heart, for instance, or the liver or the brain, and see if a particular gene that we're going to identify in the kidney also plays a role or differs with age in the other tissues.”

The lab is now conducting the genetic analysis of some of its findings and following up with some of the candidate genes it has found. “For instance, we measured magnesium in the urine. As they age, people become magnesium-deficient, which can lead to heart failure. That could either be because they don't take in enough magnesium in their diet, but it could also be because they just lose the magnesium. What we see in our mice is that as our mice are getting older, they start losing more magnesium in their urine. Our genetic analysis shows two genes that are significantly associated with the variation in urine magnesium levels.”

Korstanje speculates that during aging, the genes controlling magnesium may get turned off, or the loss of magnesium is due to the general loss of function in aging kidneys. “If this is the case,” he says, “for humans with magnesium deficiency, we might be able to intervene in such a way that could restore some function.

“What exactly are the changes in the kidney as we age?” Korstanje asks. “Which genes play a central role in those changes? Are these genes just changing individually or is there something like a master regulator that tells these genes to turn it off or to increase an expression? These are some of the questions we are looking at, and the DO mice provide the best tool we have ever had to answer them.”