Maine man of the world 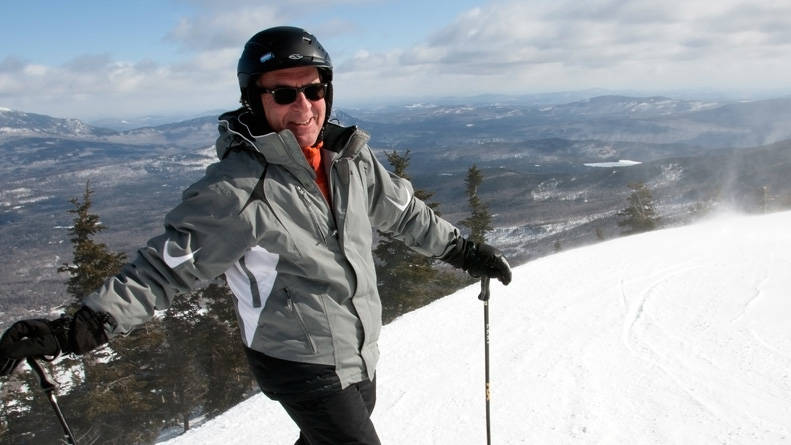 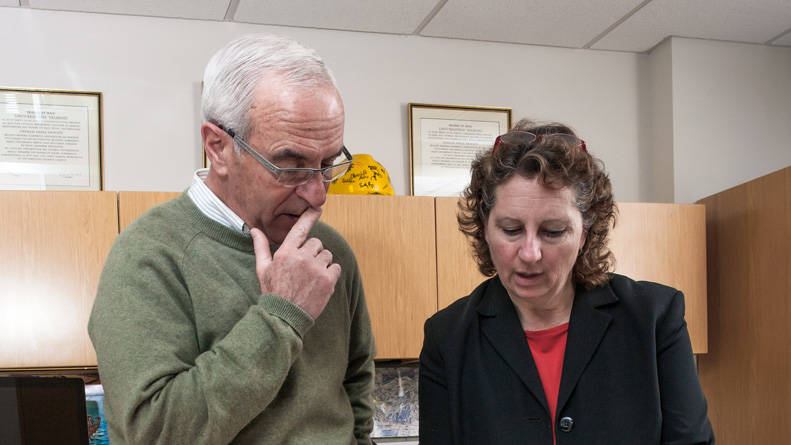 "We work hard and treat our work seriously, but we have a lot of fun mixed in with the challenges that come our way," says Louise Lopez (right). "Chuck and I both believe a sense of humor is an important part of good communication skills." 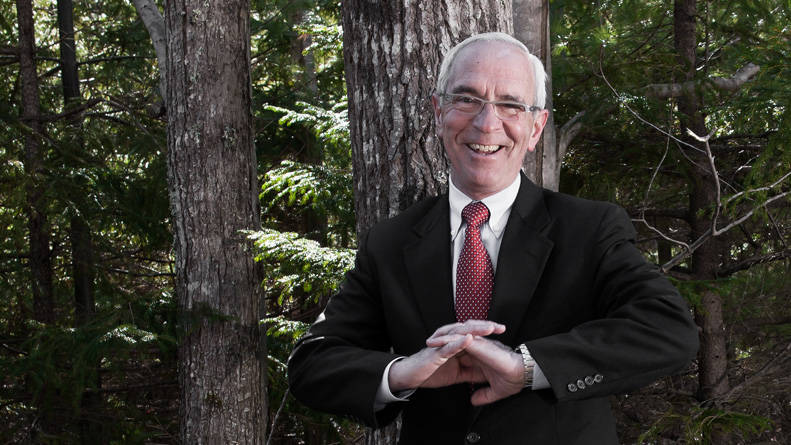 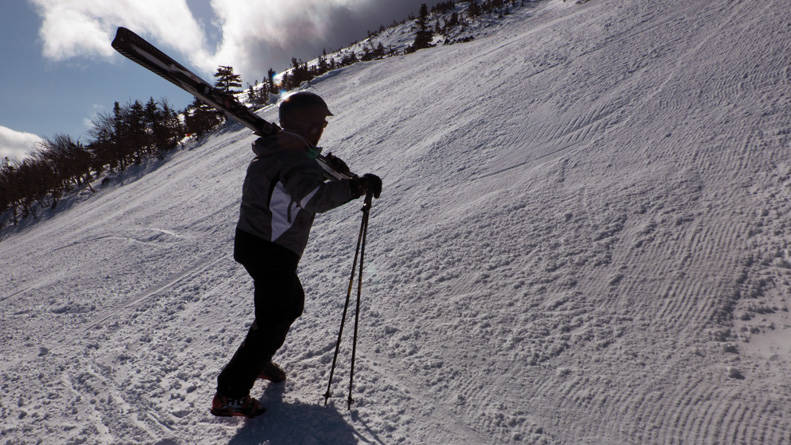 With the Timberline ski lift on wind hold, Hewett sets out on foot for the snowfields at Sugarloaf Mountain Resort in Carrabassett Valley, Maine. 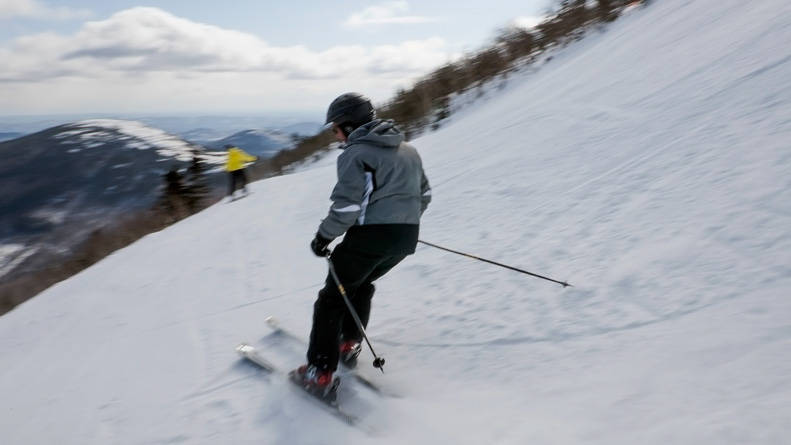 Chuck Hewett is an avid athlete and outdoorsman, equally at home in the boardroom and the wilderness. 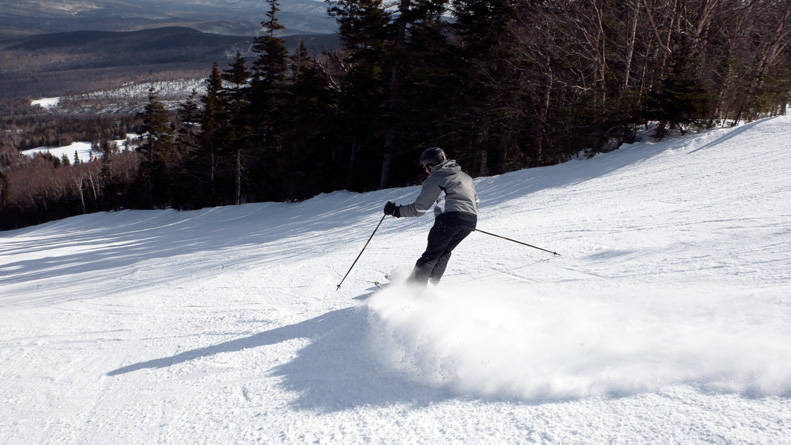 Chuck Hewett is an avid athlete and outdoorsman, equally at home in the boardroom and the wilderness 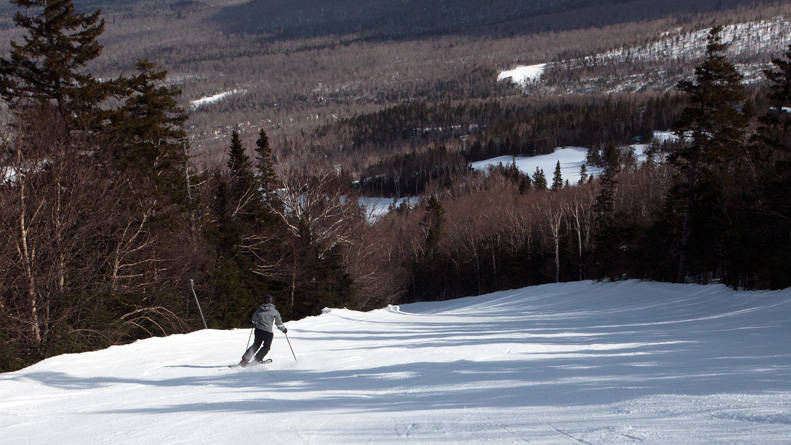 Chuck Hewett is an avid athlete and outdoorsman, equally at home in the boardroom and the wilderness.

It's a typical late-winter morning in Bar Harbor, Maine. Snow's on the ground, more's on the way, and Charles E. Hewett, Ph.D., executive vice president and chief operating officer of The Jackson Laboratory, is about to head to the airport.

The third meeting of the day is wrapping up in Hewett's office, and his executive assistant, Louise Lopez, stands in the doorway, airline boarding passes and a fat folder of documents in hand. Everyone in the room knows that Lopez, in her quiet way, means business. The engineers from the Laboratory's facilities department file out past Lopez's desk, squeezing by a couple of scientists who have stopped by, coffee mugs in hand, to greet Lopez and take squares of dark chocolate from her "secret" stash.

The suntanned, wiry Hewett, joking jovially with the scientists, puts his coat on, and Lopez hands him the paperwork. She has scheduled yet one more "walk-Chuck-to-his-car" meeting with a scientist waiting to talk over a technology-transfer issue.

For me to be part of a nonprofit organization that's shaping the future of healthcare… right here in my home state of Maine… that is really a dream come true.

Hewett and his office are the operational hub of The Jackson Laboratory. The large chunk of the institution's organizational chart that reports to him builds the buildings and lights the lights on three campuses; provides administrative and technical support for scientific research; and generates much of the income that makes it possible for the nonprofit Laboratory's 40-plus principal investigators to research the genetic causes of human disease. But Hewett has also played a major role in shaping the Laboratory's strategic direction—most notably by conceiving and then working to obtain funding for The Jackson Laboratory for Genomic Medicine.

Hewett was born in Lewiston, Maine, to a family with Maine roots going back to just after the Revolutionary War. But his route to Bar Harbor, about 130 miles northeast of his birthplace, took him across the nation and around the world. Along the way he accumulated experience in the academic, government, business and nonprofit sectors, all of which prepared him for his role at the Laboratory.

While an undergraduate at Williams College in the late 1960s, Hewett majored in political economy and environmental studies. "I went to college in an era of great social and political turmoil," he recounts. "As I looked to the future, I was torn between my love of the outdoors and the environment and my commitment to social issues."

A lifelong athlete, Hewett captained the Williams ski team, and after graduating spent two years as the varsity ski coach. Offered a three-year contract to make that job permanent, Hewett instead moved to Alaska where he worked for the National Park Service, designing the boundaries and master plans for new national parks created from the Native Claims Settlement Act of 1971. "What really got me that job were my outdoor skills," he says, "such as back-country camping, kayaking, rafting and rock-climbing. Those skills were rare in the '70s, and they figured I had an even chance of surviving in the Alaskan wilderness."

Inspired to advance his education, Hewett moved back East to earn a master's of forest science degree at Yale University, which led him first to Washington, D.C., and then to Dartmouth College, where he directed research programs in energy and natural resources. While working full time at Dartmouth, he went back to Yale to complete his Ph.D. Living in a shack in the Vermont hills to save money, he worked all day at Dartmouth and then read, studied and wrote most of the night by gas light and wood stove to complete the Ph.D. "What doesn't kill you makes you stronger but not necessarily any wiser," he says with a laugh.

Looking back, Hewett says his Ph.D. training was ideal preparation for the complex leadership roles he would take on later in life. "There's typically an ecological, social, political, financial and engineering component to just about anything you try, and you have to be able to put things together to achieve successful outcomes."

His Ph.D. in hand, Hewett spent much of the next year in Islamabad, Pakistan, as a consultant for the U.S. Agency for International Development, directing a team designing a $40 million forest-development project. Returning to the U.S. in 1983, he became the executive director of the Maine Audubon Society, the state's largest conservation organization.

In 1987 Hewett started his association with a Norwegian-based energy and pharmaceutical company, Hafslund Nycomed, rising to president and CEO of Swift River Hafslund Co. in Portland, Maine. Under his leadership, the company developed and operated a variety of innovative electric-generating facilities, fueled by gas, waste wood and hydropower.

More than two decades later at The Jackson Laboratory, Hewett would draw on that experience to establish the largest woodpellet-fueled energy plant in the Western Hemisphere. The facility burns Maine-grown and Maine-processed wood pellets, offsetting more than 1.2 million gallons of fuel oil and significantly reducing polluting emissions.

In 1992 Hewett added Irish stamps to his passport when he became the founding CEO and managing director of Nycomed Ireland Ltd., a pharmaceutical company in Cork that produces sterile injectable contrast media and is now a subsidiary of GE.

When a good friend calls, you answer. In Hewett's case, in the fall of 1994, the friend was Angus King, who had just been elected governor of Maine. When King asked Hewett to be Maine's Executive Branch COO, Hewett moved with his wife Jackie and their children, Elizabeth, Sam and Nat, back to his home state.

"I took a huge cut in pay, and I left a company that I loved working for," Hewett recounts. "But I felt a responsibility to try to help Maine grow and develop. I found that there were many good people in state government who were looking for direction, for a leader who wanted to make things happen. We got a lot done—we reorganized state government, we downsized it 17 percent, we balanced the budget and implemented new economic development and environmental protection policies."

King, elected to the U.S. Senate in 2012, describes his former COO as "one of the two or three most competent people I have ever met. Super-smart, keenly analytical and just plain tough. If you're in a political or business foxhole, Chuck is the guy you want next to you."

After serving three years in the King administration, Hewett moved to the private sector, first to Cianbro Companies, a $300 million heavy-infrastructure construction company based in Pittsfield, Maine, and then to Atlantic Energy Partners, LLC, where as chairman and CEO, he developed a complex project to install a sub-sea electric transmission network interconnecting Long Island, N.Y., with power-rich New Jersey, Pennsylvania and Maryland.

Hewett joined The Jackson Laboratory in March 2004. Rick Woychik, Ph.D., the institution's president at the time, recalls Hewett as a smart, engaged and personable man who knew how to get things done. "He had the fundamental qualities to be successful as the chief operating officer," Woychik says. "But, most important, he asked many thoughtful questions about the scientific mission of the Laboratory. When it became abundantly clear that he was genuinely interested in the science that JAX does or enables in the global community through the distribution of genetics resources and knowledge, that's when I knew he was right for the job."

Being active and healthy is a critical part of a good life.

Surplus from JMCRS sales is a vital source of funding to maintain the Laboratory's research program, as federal research grants don't cover all of the direct costs, let alone the overhead needed to keep the institution running. In the last 10 years, JMCRS revenue has nearly tripled, to $140 million. Hewett credits that success to his JMCRS management team. "Kathy Vandegrift has made our organization much more productive and efficient, and Auro Nair has made huge strides in making us more customer-focused and establishing us with scientists around the world."

Jackson Laboratory President and CEO Edison Liu, M.D., notes, "JMCRS is important not only because of the revenues it generates that support our fundamental science, but also because it is a major part of the JAX brand. To many in the scientific community, JMCRS is the face of JAX and is the arm that empowers their research."

Of Hewett himself, Liu says, "Chuck is perhaps the most talented management leader I have ever worked with. What I am amazed by is the breadth of his management capabilities. He covers all aspects of JMCRS, but also facilities, finance and HR. How he does this is also impressive: He has great loyalty from his team, who believe in his leadership, his honesty and his commitment to the institution."

In fact, Hewett, himself credits his team for his success. "I couldn't do one of their jobs," he says. "They know I depend on them and value all that they make possible. I've never worked with a harder-working or more successful group."

Hewett is also committed to improving the health and well-being of the Laboratory's 1,600-plus employees. Thanks to the JAXfit wellness program he instituted and medical care contracts he negotiated, employee health insurance costs have not risen in the last five years, and scores of employees have moved from high-risk to moderate- or low-risk health categories.

"Being active and healthy is a critical part of a good life," Hewett says. "And an employer has an obligation to encourage employees to eat right and exercise, and make the necessary resources available. It's the right thing to do for people, and it's also good economics for the employer."

The trim Hewett clearly practices what he preaches, making fitness a priority in his own life despite his busy work and travel schedule. He and his athletic family enjoy skiing, and he still has a competitive streak that dates back to his college years that he exercises these days by racing his sailboat. He took up scuba diving seven years ago "and fell in love with it," traveling around the world to great diving spots and certifying new divers in a lake near his house. He likes to run, water-ski, canoe, kayak and hike, and he and Jackie own and ride horses.

Looking at his tenure at The Jackson Laboratory, Hewett says, "For me to be part of a nonprofit organization that's shaping the future of healthcare through great research and by making science possible around the world, right here in my home state of Maine . . . that is really a dream come true."