Since the advent of the COVID-19 pandemic, tremendous progress has been made in developing effective vaccines against SARS-CoV-2, the coronavirus that causes COVID-19, and in treating ill patients. Nonetheless, much more needs to be learned about SARS-CoV-2 infectivity and COVID-19 progression to lessen the continuing threat of infection, as the recent emergence and rapid spread of the delta variant has emphasized.

One of the hallmarks of COVID-19 is extreme variability in disease progression and patient response. While SARS-CoV-2 causes severe or fatal disease in some patients, a significant percentage of infected people remain asymptomatic, exacerbating efforts to identify positive cases and slow disease transmission. Some general patterns of susceptibility have emerged—the elderly and those with certain comorbidities are particularly prone to severe disease, for example—but even people of the same age, location and health status can have vastly different COVID-19 experiences. So what underlies the differences?

A plausible answer is our own genetic variability, which leads to important differences in how our bodies, particularly our immune systems, actually respond to viral infections. It’s a plausible hypothesis, but very difficult to validate in human populations. To explore the role of host genetics in COVID-19 disease, researchers at The Jackson Laboratory (JAX) and Rocky Mountain Laboratories (RML, operated by the National Institute of Allergy and Infectious Diseases) teamed up to generate a genetically diverse panel of mice and analyze their SARS-CoV-2 infection responses. A preprint paper recently published to bioRxiv.org, “Genetically diverse mouse models of SARS-CoV-2 infection recapitulate clinical variation and cytokine responses in COVID-19,” shows that host genetic features do indeed underlie highly variable responses to infection. It also takes a preliminary look at the potential biological mechanisms involved. (The preprint has yet to be peer reviewed.)

When the pandemic began its worldwide spread in early 2020, researchers seeking mouse models faced a problem. SARS-CoV-2 infects human cells through binding to a particular cell surface receptor, ACE2, but it doesn’t bind to the mouse version of ACE2. Fortunately, a mouse strain carrying a human ACE2 receptor (hACE2) had been created in 2007 in response to the SARS coronavirus epidemic and was infectible by SARS-CoV-2. JAX scientists rapidly produced and distributed the mice, known as B6.Cg-Tg(K18-ACE2)2Prlmn/J (or K18-hACE2 for short), to help with vaccine and therapy development. It was a vital first step, but with a limitation: the mice uniformly developed severe disease and succumbed within a week.

To better represent the spectrum of human responses to SARS-CoV-2, a research team led by JAX’s Nadia Rosenthal, Ph.D., F.Med.SciInvestigates the role of genetic variation and the immune system in tissue repair, focusing on cardiovascular and skeletal muscle diseaseNadia Rosenthal, Ph.D., F.Med.Sci., and RML’s Sonja Best, Ph.D., and Shelly Robertson, Ph.D., turned to other mouse strains. They chose eight well-characterized strains that were previously used as founders for genetically diverse mouse populations such as the Collaborative Cross. They crossed the original mouse with the hACE2 receptor that was generated on one of those strains, C57BL/6J, with the other CC founder strains (A/J, 129S1, NOD, NZO, PWK, CAST, and WSB). The researchers included two additional strains, Balb/c and DBA, because of their importance in biomedical research. The progeny of these crosses included hACE2 receptors from their C57BL/6J parent, with half of their genomics derived from another strain.

The nine hybrid mouse strains were infected with SARS-CoV-2, carried identical viral loads, and were monitored for 21 days. Recapitulating what has been seen in human patient cohorts, the different mouse strains displayed a broad spectrum of disease severity, based on weight loss and survival curves. Some hybrids (A/J) were highly sensitive like the parental C57BL/6J mouse, while others (PWK, NZO, 129S1) were resistant to severe disease. The other three mouse hybrids had marked sexual dimorphism in their responses, meaning that male and female mice reacted quite differently. In CAST and NOD hybrids, males were more susceptible to lethal disease, but in the WSB hybrid, infection was lethal for females and led to sustained weight loss in males. Viral replication levels and disease pathology also differed between the strains, although at times the differences were surprising. For example, the “resistant” PWK, female NZO and 129S1 hybrid mice tended to have higher pathology scores in their lungs than the sensitive C57BL/6J and A/J hybrid mice.

Another important variable in human COVID-19 is the cytokine response, a key immune signaling system for battling infectious disease pathogens. Severe COVID-19 cases are associated with dysregulation of the cytokine response throughout disease progression. Analyzing cytokine levels at three- and six-days post-infection, the researchers found patterns across the mouse strains that were consistent with human disease severity and showed important sex differences. Of particular note were the resistant PWK hybrids, which showed rapid viral control, versus male NOD and female WSB hybrids, which had marked cytokine dysregulation and moderate to high virus replication in the lung. The mice offer a valuable resource for further investigation into the precise roles of each cytokine in the immunological response to SARS-CoV-2 infection.

Taken together, these initial results highlight the importance of better understanding how host genetic factors affect COVID-19 infection and disease pathology. It also showcases the value of diverse mouse models for identifying the molecular pathways associated with the range of responses seen in COVID-19 patients.

“Providing a preclinical platform for linking features of disease susceptibility to patient genetic background promises to bridge the knowledge gap in our understanding of underlying differences among COVID-19 patients, facilitating the development of predictive tests for rapid diagnoses,” says Rosenthal. “These mice broaden the experimental window for mechanistic studies and therapeutic intervention strategies in the spectrum of diseases caused by SARS-CoV-2 and its variants.” 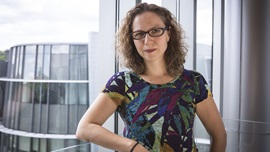 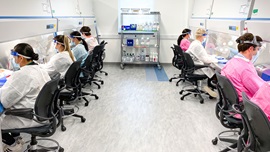 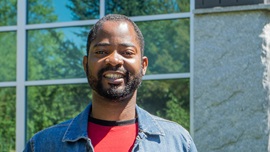 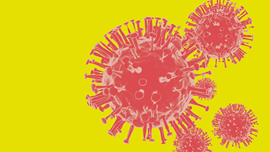