JAX scientists have developed and characterized a suite of transgenic models expressing human FCRN to test antibody half-life. This platform is widely supported in published literature and accepted by top pharma and biotech companies as a reliable means to predict the pharmacokinetics of therapeutic antibodies in humans.

Half-life results for monoclonal antibodies tested in conventional mice do not correlate with the pharmacokinetics in humans because some human IgG Fc variants (the receptor responsible for salvaging IgG) bind mouse FcRn too tightly, while others bind too weakly, yielding poor prediction of performance in humans.

“The Tg32 homozygous mouse is a particularly valuable tool to predict human PK alternatively to NHP for a number of reasons including: economical and ethical concerns, ease of handling, lower costs, and lower drug material requirements.” Avery, mAbs, 2016 (Pfizer) 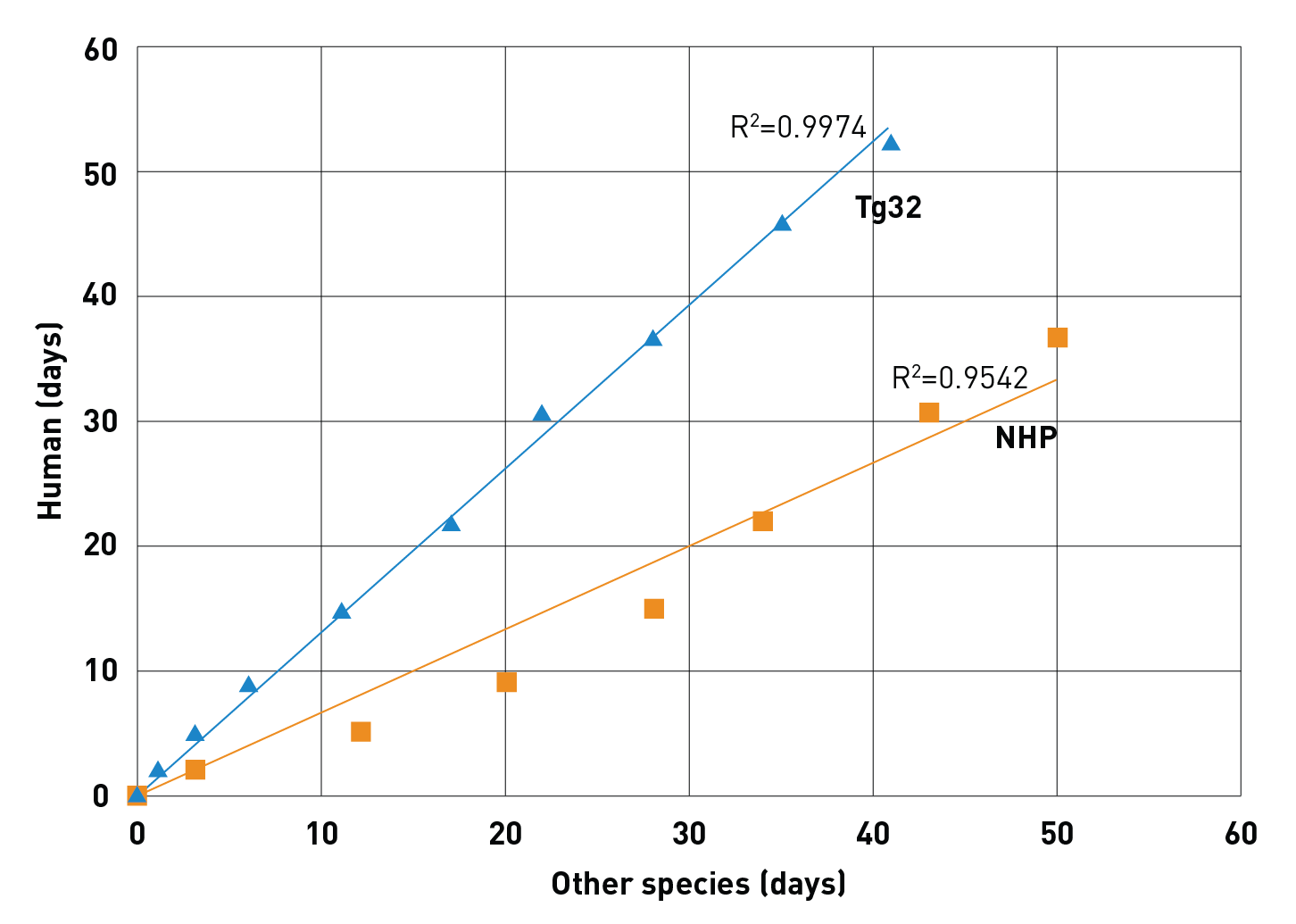 Correlation of a human mAb stability between transgenic humanized mice (Tg32) or non-human primates (NHP) and humans. The correlation coefficient is shown in the graph. The axis represent the day at which the same relative concentration of the mAb is seen in humans (vertical axis) or the other species (horizontal axis)

Other potential models for therapeutic evaluation

The Tg276 model is optimal for screening similar antibodies for subtle PK differences.

Early evaluation of antibody PK in vivo allows resource dedication to the most promising candidate. Discrimination between the PKs of multiple candidates can allow for selection of variants with superior clearance dynamics. 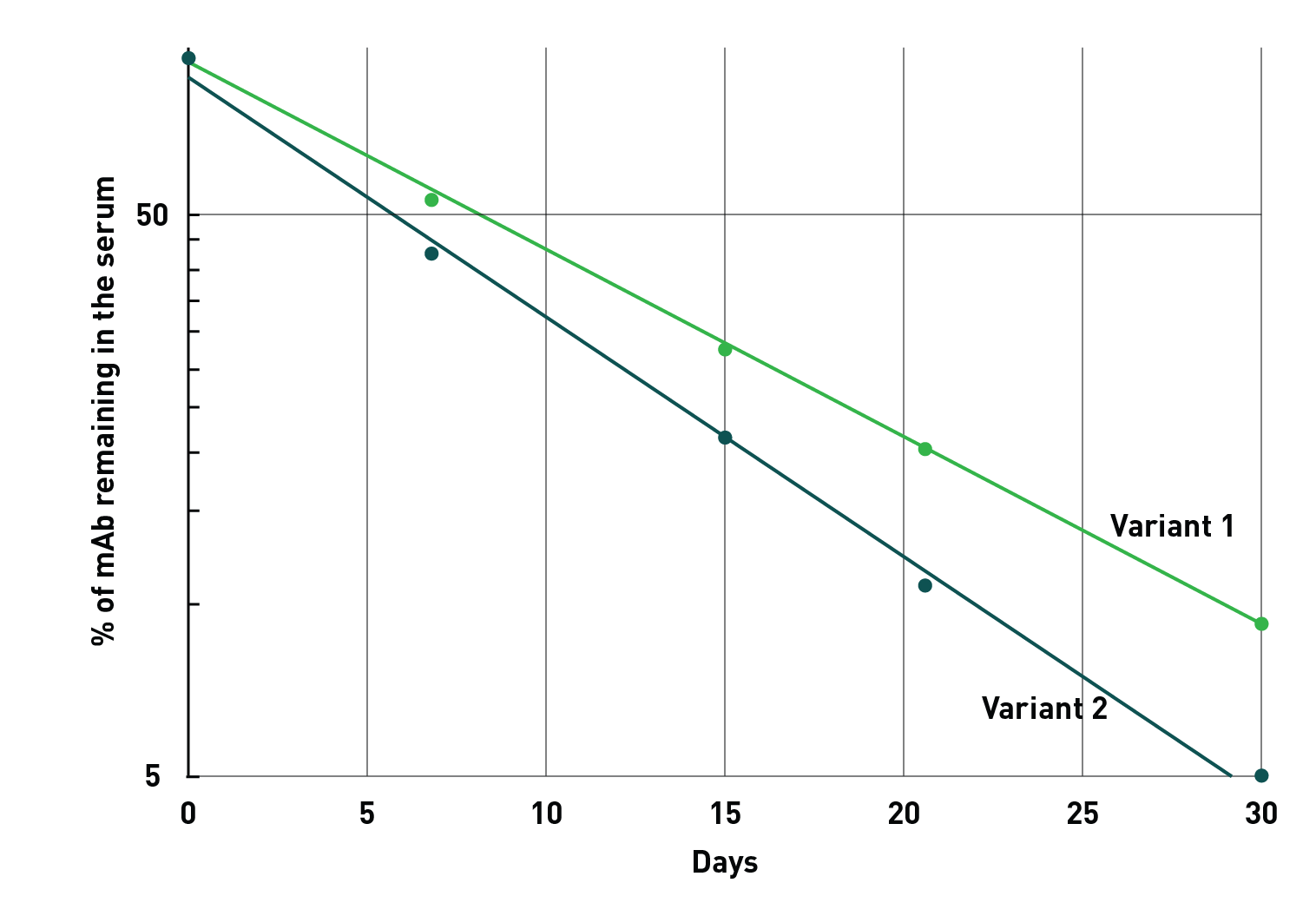 The Tg276 mouse line, expressing human FCGRT ubiquitously, can be effectively used to detect subtle half-life differences in mAb variants. The vertical axis represents the percentage of mAb remaining in circulation, the horizontal axis shows the days after injection.

The Tg32.scid model allows for PK assessment of therapeutics that might otherwise result in immunogenicity.

A small subset of therapeutics may elicit ADA (anti-drug antibody) responses due to the intact immune system in the standard Tg32 mouse model. The scid allele makes these mice immunodeficient, therefore allowing the ability to test potential immunogenic human immunoglobulin and Fc-domain based therapeutics. 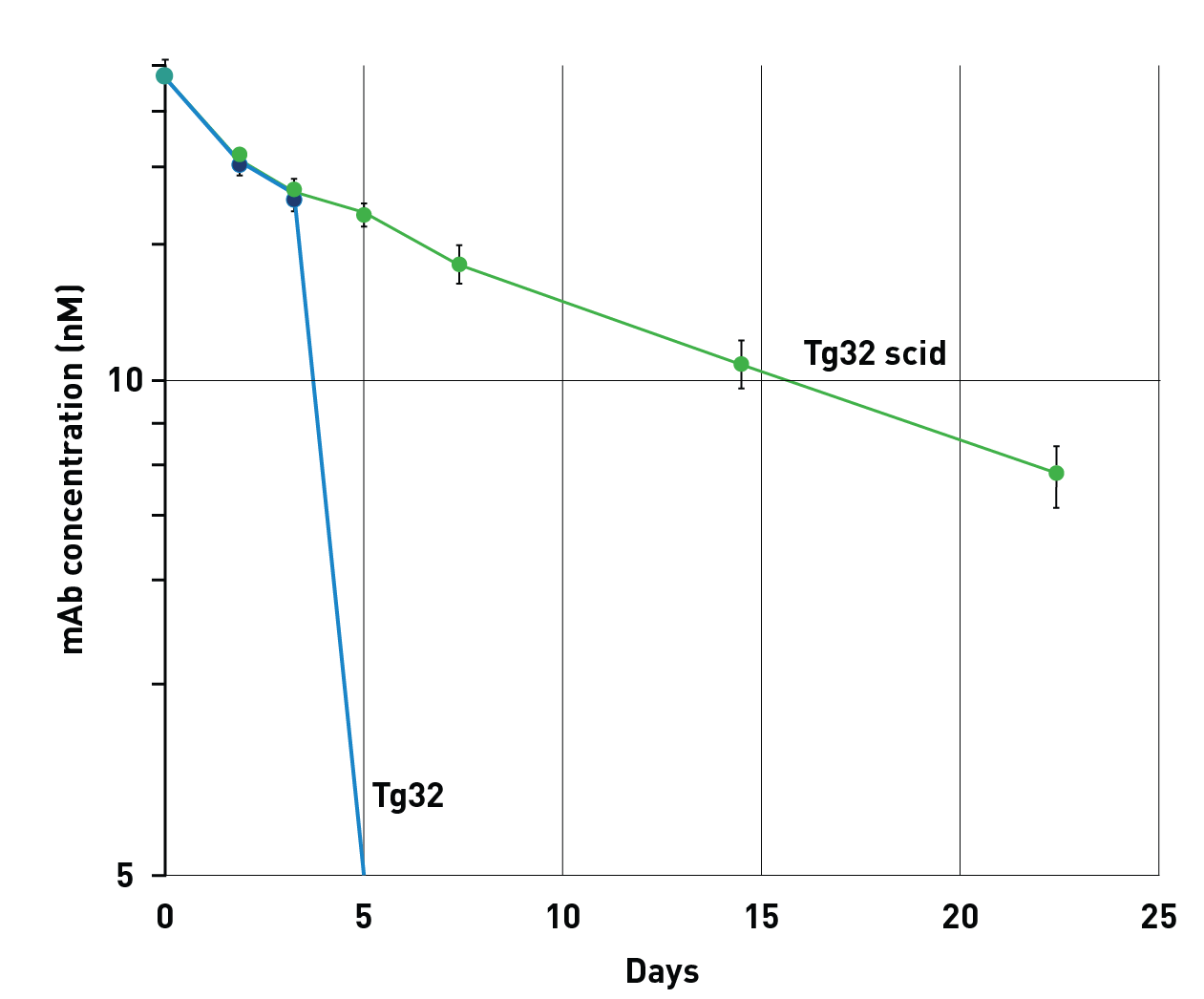 Anti-drug antibody (ADA) response in Tg32 mice can obscure the actual half-life of a human antibody. Tg32 harboring a mutation in the Prkdc gene (Tg32 scid) do not produce antibodies and cannot mount an ADA response. On the vertical axis in the concentration of the human IgG in nmoles/I, while on the horizontal axis are the days post-injection.

The Tg32.Albumin model can be used to determine the pharmacokinetics of albumin-based drugs.

Albumin is an attractive candidate for half-life extension and conjugates. Albumin-based therapies are rapidly cleared from conventional hFcRn mice because murine albumin out-competes human albumin. This Tg32 albumin-deficient model may be useful for studying the biology and pathobiology of serum albumin as well as evaluating human albumin pharmacokinetics. 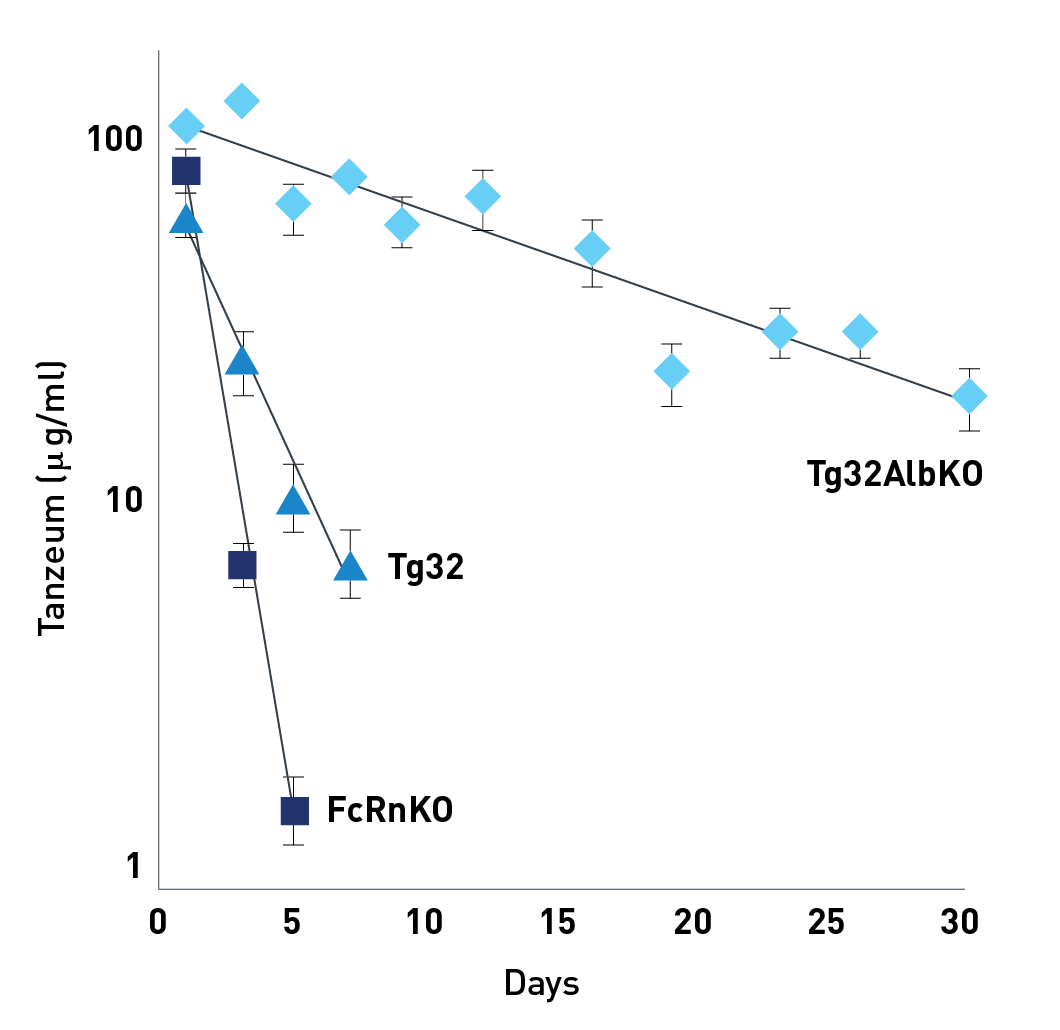 The albumin-conjugated drug, Tanzeum, was IV injected into humanzied FcRn mice with (Tg32) and without (Tg32AlbKO) mouse albumin or into mice with no FcRn (FcRn KO). The concentration of circulating Tanzeum in serial blood collections over 30 days was analyzed by ELISA. The drug was rapidly cleared in both Tg32 and FcRn KO mouse models. As expected, the drug had a longer half-life, close to 10 days in the Tg32AlbKO mice.

Example of Pharmacokinetic Studies Run by JAX IN Vivo Services 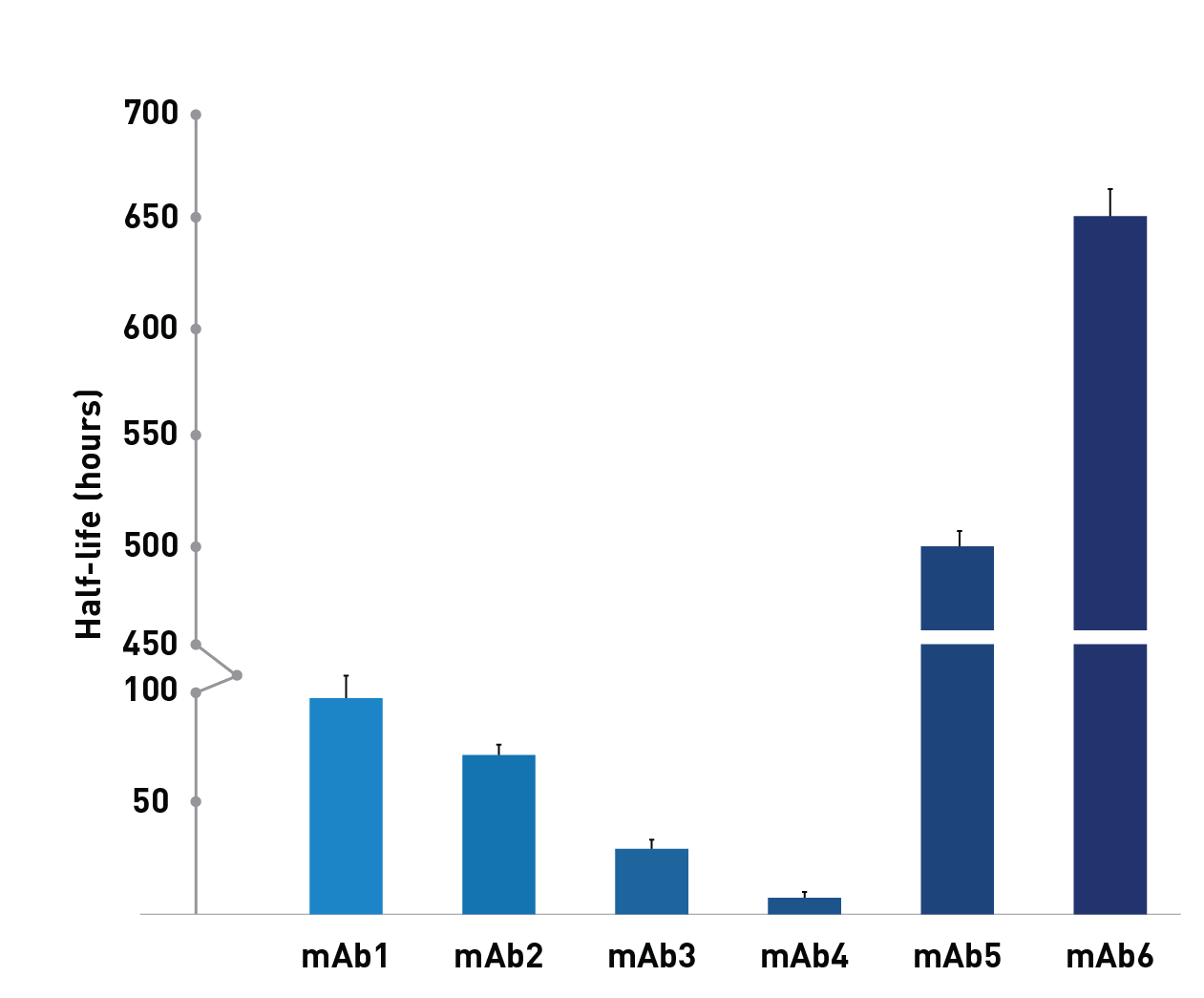 Talk to an expert

Our technical scientists have curated lists of commonly asked questions. Check here for any question you have about your model, study, or procedure.